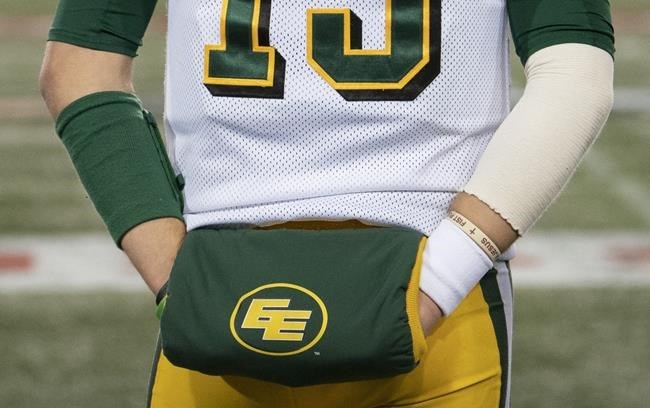 EDMONTON — The Edmonton Eskimos of the Canadian Football League have decided to keep their team name despite concerns from some Inuit leaders.

The club said consultations in the North provided no agreement on whether the name should be changed.

"We heard a wide range of views, ranging from individuals within the Inuit community who were very supportive of the name, and some (who) weren't as supportive," Janice Agrios, chairwoman of the team's board, said Friday.

"What we did consistently hear was a desire for more engagement with the club."

Concerns were raised in 2015 by Nathan Obed, head of Canada's national Inuit organization, days before the team played the Ottawa Redblacks for the Grey Cup. Obed has said that Inuit people are not mascots.

Similar concerns have been raised about other professional sports teams using Indigenous names or references.

Justice Murray Sinclair, head of the Truth and Reconciliation Commission, has said that it's time to get rid of Indigenous mascots, which would never be tolerated if they targeted any other cultural group.

The Eskimos team met with Inuit leaders and people in the northern communities of Iqaluit in Nunavut, and Inuvik, Yellowknife and Tuktoyaktuk in the Northwest Territories. The team also hired a research firm to do a telephone survey among Inuit, reaching as far eastward as Labrador.

She said support varied geographically. Respondents in the western Arctic were almost as supportive of the name as the team's season ticket-holders. In the eastern Arctic, where most Inuit people live, support fell off.

"There would be more fans of our club in the western Arctic and so that's where we found a very high level of support for the name," Agrios said.

Those communities were most eager to see more visits from the team.

Agrios said the issue is settled unless something changes.

"The plan is to continue to listen to all views. If circumstances change, we'll evaluate."

Although American Inuit continue to use the word Eskimo, Canada's northern people left that name behind at about the same time they began negotiating their land claim in the 1970s.

Many historians believe the origin of Eskimo comes from an Algonquin term meaning "eaters of raw meat."

Others believe it actually comes from another aboriginal term that refers to people wearing snowshoes.

The people themselves have used the word Inuit for centuries. It means "the people" in Inuktut.

This report by The Canadian Press was first published Feb. 14, 2020

Alberta government asks court to stay judge's order regarding oilsands decision
Feb 26, 2020 1:46 PM
Comments
We welcome your feedback and encourage you to share your thoughts on this story. We ask that you be respectful of others and their points of view, refrain from personal attacks and stay on topic. To learn about our commenting policies and how we moderate, please read our Community Guidelines.