CFB 4 Wing Ground Search and Rescue (GSAR) is in the midst of a cold weather survival exercise designed to give pilots the confidence to await rescue if they eject from their aircraft.
Jan 12, 2016 12:00 AM By: Lakeland Today Staff 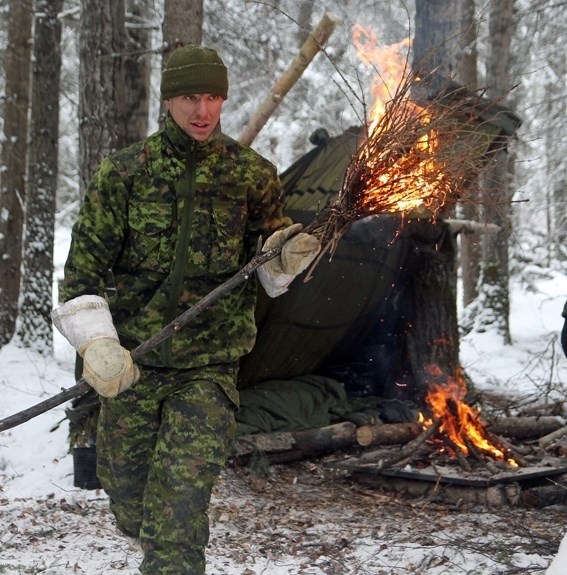 As part of Frosted Flier, trainees were required to light a signal fire to alert helicopter crews of their location.

CFB 4 Wing Ground Search and Rescue (GSAR) is in the midst of a cold weather survival exercise designed to give pilots the confidence to await rescue if they eject from their aircraft.

Exercise Frosted Flier takes place for six weeks at the Cold Lake Air Weapons Range (CLAWR) every January and February, giving 4 Wing pilots and aircrew experience in the psychology of survival. Cold weather survival training has taken place at the CLAWR in some shape or form since the 1950s.

Three GSAR trainees successfully completed the exercise last Thursday by spending 72 hours in the wilderness, left with nothing but a saw and food rations. All three had to complete the following tasks: make a campfire, spend the night in a shelter and build a signal fire to ensure you can be found by an airborne search and rescue crew.

Trainees were also challenged to create a deadfall to trap animals and fashion a spoon out of wood to eat their rations.

“If they weren't going to get me today I'd be fine another night,” said Christian Pomerleau, an aviator at 4 Wing who completed the exercise. “They were feeding me, but knowing that I built a campfire and even built a signal fire, which it's my first time building one, so I'm very happy about that seeing how big it was, it's a big accomplishment.”

Pomerleau faced quite an ordeal in order to successfully complete the task at hand. Coyotes circled his campsite at night, he had to work hard to build the shelter during shorter days, and constantly had snow boiling for drinking water, which he drank every 15 minutes to avoid getting dehydrated.

“This experience has helped me gain confidence to be able to go out into the bush, get lost and spend a few night out there,” Pomerleau explained. “You could say it's a big confidence booster and I would recommend it to everybody.”

Cold Lake 4 Wing GSAR comprises of highly trained volunteers from the base that assist in rescue operations in areas typically inaccessible to helicopters. From finding ejected pilots to locating base members that have gotten lost in the wilderness, GSAR members learn the inhospitable and vast terrain of the CLAWR to mount rescue operations year round.

After successfully completing the course, Pomerleau and his colleagues will join the GSAR cadre to train new volunteers, passing on tips and tricks they learned from their recent experience.

For Pomerleau these little survival tricks go a long way in making an unexpected stay in the wilderness a little bit more pleasant. Instead of building a typical L-shaped wall, for example, he constructed an extra wall to trap heat inside his shelter.

Although he said he wouldn't mind going through with the experience again, Pomerleau added that he would carry a few more tools and hygiene items with him next time.

“You deal with what you have you make the best of it and you stay positive.”

These survival skills have come in use before. The last time a 4 Wing pilot had to eject at the CLAWR, he followed his GSAR training and was ultimately rescued by a helicopter.

“This is an excellent opportunity in a controlled environment under highly trained professionals to go out and safely conduct survival operations, without the threat of doing it on your own,” said Master Corporal Jonathan McArthur, deputy officer commanding 4 Wing GSAR. “There is a safety net here, the students are regularly checked on.”

Ten more students will make the CLAWR their temporary home over the coming weeks, with Frosted Flier coming to an end on Feb. 12.