A walk through town: Families, coronavirus and togetherness 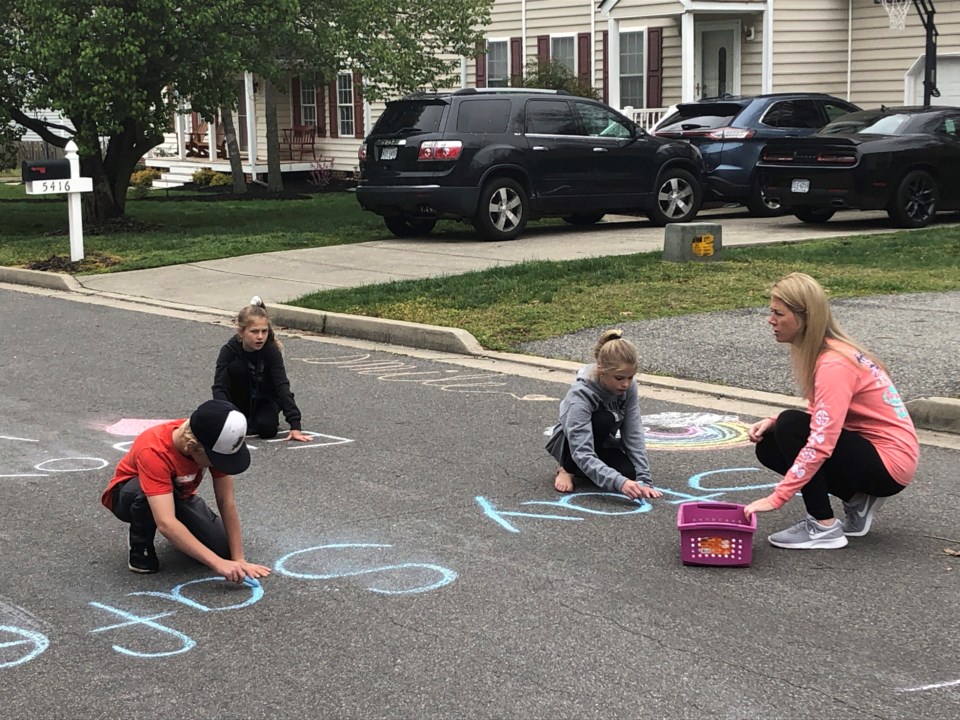 GLEN ALLEN, Va. — In a quiet suburb just north of Richmond, Virginia, a mother and her three children spend a weekday afternoon planting a small garden of spinach, red cabbage and lettuce. Across town, a dad teaches his kids how to play volleyball on an empty court. In a sprawling park, a father shows his son and daughter the perfect flick of the wrist to skip rocks in a stream.

Similar scenes — idyllic, except for the context — are playing out in communities around the United States. Stuck at home, thrust together, parents and children are navigating the most unsettling of circumstances and finding new ways to connect. This is one community's story, gathered this week from walks and observations of families keeping to themselves yet still, somehow, managing to remain part of a larger whole.

With its top-rated schools, bucolic parks and large collection of shops and restaurants, Glen Allen is the kind of place built for families. The once-rural area is now one of the most sought-after suburbs of Richmond, 11 miles (18 ) northwest of the capital. Its population of just under 15,000 gives it a not-too-big and not-too-small feel, and its proximity to Richmond makes it a prime commuter community.

As in so many other American towns, life here has changed since the coronavirus began to spread. Large gatherings are banned. Schools have closed through the rest of the academic year. Countless businesses are shuttered, at least for the time being.

and parks that are normally deserted on weekdays are now filled with parents and children, out for a walk, run or bike ride together — carefully maintaining distance, but still clearly part of a community. On Wintercreek Drive, families play games together in their own yards and talk to over backyard fences, standing back at least 6 feet so as not to risk exposure. In Echo Lake Park, families walk their dogs, smile and nod as they pass other dog walkers on a half-mile nature trail.

In Crump Park, an expansive recreation area with large open fields and an 1860 living history farm, families play together in small groups, dotting the landscape with pods of people — each yards apart from the other, observing social distancing guidelines in the age of coronavirus. A father and his preteen son sit by a pond fishing. Two children ride scooters as their dad walks behind them. A family of four spreads out a blanket and has a picnic.

“All their activities — swimming, basketball, volleyball — they've all been . That opens up a lot of free time,” says Dwayne Cook, a 52-year-old mortgage broker who has been taking breaks from working at home to go to the park with his two children, Cameron, 14, and Corinne, 12.

Cook says he spent one trip teaching his kids how to skip rocks in a stream. He and his son also had a pull-up contest on the playground.

“It's nice to be outside, get some sun and leave the phones in the car," he says.

Fifty yards away, two kites bob high above a hill. Brett and Teresa Hobbs are teaching their two daughters, ages 7 and 11, about the gift of a perfect afternoon breeze.

“For our family, it's given us more time to talk,” says Teresa Hobbs, a kindergarten teacher.

In a cozy subdivision called Winterberry, Meg and Dan Tully have been trying to come up with ways to balance working at home with schoolwork and the need to keep their three active boys busy. With the school running club shut down, they've been taking turns leading the boys on their usual mile run.

Dan Tully, a telecommunications engineering manager, still dresses in business attire for video conferences while working at home. During occasional breaks, he kicks a soccer ball around the yard with his kids. On one recent day off, he and his wife took the boys to a nearly empty Twin Hickory Park and taught them the finer points of spiking and serving a volleyball.

A quarter-mile away, Jamie and Joe Burton and their three children are eating dinner together every night, once a rarity with their busy schedules. Their daughters, 12 and 9, are competitive gymnasts who used to practice five nights a week, while their son had weekly baseball games and practices.

Jamie Burton, a registered nurse, still must go to work. But because the kids are home from school and their extracurricular activities have all been , the family's lighter schedules have opened up new opportunities for doing things together.

“My oldest daughter said, ‘Mom, I know this is scary and a lot of things are going on in the world. But the one positive I see immediately is that we're able to spend more family time together,'" Burton says.

Burton's Stephanie Owens, a pharmacist, has also continued her usual work schedule. But the kids being home from school has created extra pockets of time. Last week, she, her brother, mother and her three sons — 12, 8 and 3 — all planted a small garden in a corner of their backyard.

“It's nice to be able to have more time with them,” Owens says. “Usually, it's get up in the morning, get ready to go to school, do homework at night and go to bed.”

This is, it seems, a case of circumstances helping to double down on a trend that already exists. Liana Sayer, director of the Time Use Laboratory at the University of Maryland, says research shows that parents have been spending more leisure time with their children since the 1970s. She expects that trend to only accelerate as the coronavirus continues to disrupt daily life.

“We have a new set of constraints now — one that is forcing people to spend time together, not keeping them apart in the way that work schedules and school schedule and activities' schedules did,” Sayer says.

All of this togetherness and free time has been a silver lining in the coronavirus outbreak for many middle-class and affluent families. But it's hardly universal. Jessica Calarco, a sociology professor at Indiana University, says the crisis hasn't provided the same opportunities for many working-class families, hourly workers and single parents. They're wondering how they are going to pay for child care and worrying about losing their jobs as more and more businesses close.

“They don’t have the flexibility to work at home or take an hour out of the middle of the day to take a walk with their kids because of the other types of pressure they may be facing,” Calarco says. “I worry about the inequalities that are resulting from this.”

Universal takes first steps reviving Orlando theme park biz
Jun 4, 2020 2:01 PM
PUBLISHERS WEEKLY Bestsellers
Jun 4, 2020 1:40 PM
Comments
We welcome your feedback and encourage you to share your thoughts. We ask that you be respectful of others and their points of view, refrain from personal attacks and stay on topic. To learn about our commenting policies and how we moderate, please read our Community Guidelines.