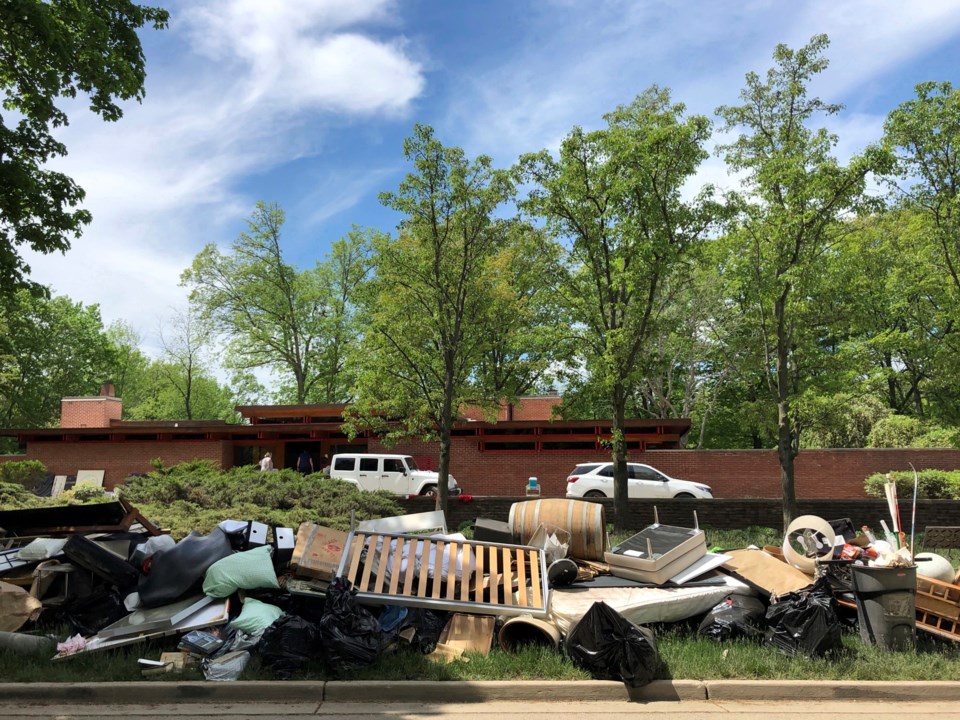 MIDLAND, Mich. — Christopher Jue knew he was home the moment he and his wife stepped inside the sprawling 62-year-old ranch with brick floors, a sunken living room and built-in desks, shelves and bureaus — hallmarks of an Alden B. Dow original.

“To say it was a no-brainer is an understatement,” Jue said of their decision to buy eight years ago in Midland, where more than 400 midcentury modern structures have made the city of about 42,000 a mecca for enthusiasts of the architectural style that emphasizes function and features clean lines, repeating patterns and spaces integrated with the outdoors.

Now, many wonder how badly the city’s distinctive buildings — which also include the library, churches and schools — were damaged last week after torrential rains overwhelmed two central Michigan dams and submerged much of the city in water deeper than most residents had ever seen.

“As of right now we don't know of any that are a total loss, but we don't know whether all the homeowners will choose to restore them," said Craig McDonald, director of the Alden B. Dow Home and Studio, which started a project called Midcentury Modern Midland three years ago to identify and the city's midcentury buildings. It documented 437, designed by dozens of architects from the 1930s-70s.

Dow, an architect whose family founded Dow Chemical Co. in Midland, about 130 miles north of Detroit, introduced modernism to the city and built many of its significant buildings. Other notable architects included Glenn Beach, Jackson Hallett, Francis “Red” Warner and Robert E. Schwartz.

Dow's studio and private home, built between 1934 and 1941, were spared from the flood because the pond that borders the block and glass structure has an outflow to a steep ravine that drains to the Tittabawassee River. The ravine was almost filled when the river crested at an all-time high of just over 35 feet (10.7 ) “and if it had risen any higher we would have been in trouble,” McDonald said.

Many buildings were similarly unscathed. But others didn't fare as well.

One of Schwartz's most famous houses, built in 1964 and known for its dome-shaped shell made with Dow Chemical Styrofoam, took on almost 8 feet (2.4 ) of water, compared to 3 feet (nearly 1 ) during a big flood in 2017, said McDonald. He said the house can be saved.

The lower level of the Grace A. Dow Memorial Library, which houses the children's section and the city's public television studio, also flooded. The library was designed by Alden B. Dow and named after his mother. Restoration from damage caused by the 2017 flood was recently completed inside and outside the building, McDonald said.

McDonald recalled spending time as a child in the midcentury library and sitting on Barcelona chairs and stools, a classic midcentury furniture design, in the gallery and other spaces.

“Every public building in our town was gifted with ... beautiful design and it’s what we knew as normal," McDonald said. "The incredible thing about Midland is that midcentury is woven into our whole community: it’s churches, it’s houses, it’s office buildings, it’s gas stations, it’s flower shops.”

Nobody knew exactly how far Dow's influence reached or how many midcentury buildings were in the city until Midcentury Modern Midland began digging through city records and canvassing three years ago, director Carol Neff said. And there likely are many more than the 437 listed now because they include only buildings for which the architect, designer or engineers could be authenticated.

Retirees Linda and Charles Mikkelsen said they moved to Midland from Dallas in November “just because of the architecture,” though they had never visited the city before they began looking for a retirement home in Michigan, where Charles grew up.

Their 3,400-square-foot (316-square-meter) home, designed in 1966 by Jackson Hallett, is mostly masonry, brick and glass. Floodwater came through the windows and doors, and was about 2 feet (0.6 ) deep. But as the Mikkelsens cleaned up and huge dehumidifiers hummed at their house this week, they said they had no regrets.

“This is an incredible town,” said Charles Mikkelsen, for whom living in a midcentury home had been a longtime dream. ”This is what we planned to do when we retired."

Christopher and Claudia Jue have no intention of leaving their 1958 home despite two floods in three years. This time their home, which was built on a concrete slab and overlooks a creek, was filled with about 5 feet (1.5 ) of water. In 2017, it was flooded by less than a foot (0.3 ) and it took 9 months to restore. Their street has 19 midcentury homes, including some of the most renowned in Midland.

The Jues, who moved all of their furniture to storage as the water rose, said the house is solidly built — it’s mostly cement and brick, and is structurally sound. The force of the water cracked several large windows, some drywall might have to come down and they’re not sure if the built-in cabinetry can be saved.

But they’ll Dow’s original vision with any restoration.

“You can marvel at the beauty, the flow, the and the openness (of a Dow home), but you really realize the integrity at a time like this,” Jue said. “That's the brilliance that probably goes unnoticed.”

Teams search for 'Glee' star Naya Rivera at California lake
Jul 9, 2020 1:05 PM
Comments
We welcome your feedback and encourage you to share your thoughts. We ask that you be respectful of others and their points of view, refrain from personal attacks and stay on topic. To learn about our commenting policies and how we moderate, please read our Community Guidelines.