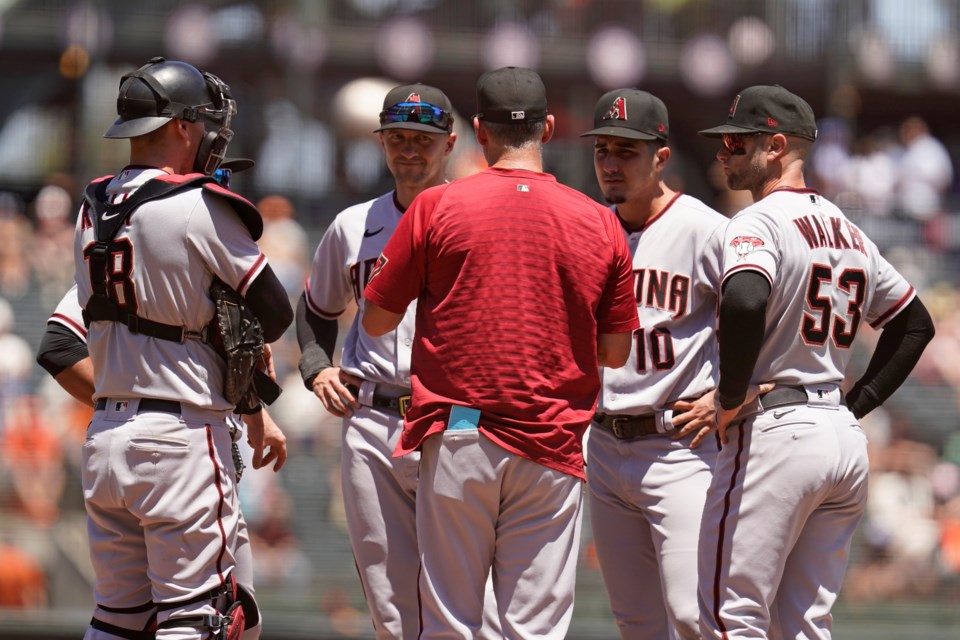 A look at what’s happening around the majors Friday:

Major League Baseball has taken another big step in relaxing coronavirus regulations, allowing fully vaccinated players and staff to stop wearing masks in dugouts, bullpens and clubhouses, according to a memo sent by the league and players’ association Wednesday.

Other restrictions related to travel on buses and planes were also eased, including an end to monitor testing. PCR intake testing for vaccinated players and staff rejoining a team after commercial travel has also been eliminated, unless those people are showing COVID-19 symptoms or are known to have been exposed.

The league had already begun easing restrictions on clubs that achieved 85% full vaccination among field-level staff, and 22 of 30 teams had reached that level as of last Friday.

The Seattle Mariners said Thursday they will return to 100% capacity at T-Mobile Park on July 2, the 29th of the 30 teams to return to full capacity. The only club not at full capacity is Toronto — the Blue Jays haven’t played in Canada since 2019, and they are set to host home games in Buffalo through at least July 21.

José Altuve has four home runs in the past three games and Houston has won four straight heading into a matchup with Carlos Rodón (6-2, 1.89 ERA) and the AL Central-leading Chicago White Sox.

“He continues to amaze us hitting the ball out of the ballpark,” manager Dusty Baker said. “We’ll take all he can give us.”

Luis Garcia (5-4, 2.98) pitches for Houston, which won the series opener 10-2 on Thursday night in the first managerial matchup between Baker and Tony La Russa since September 2011.

La Russa, who is 76, and Baker, who turned 72 this week, are the two oldest managers in the majors. Thursday night marked the first MLB game with two skippers 70 or older since San Francisco’s Felipe Alou (71) and Washington’s Frank Robinson (70) met on Aug. 2, 2006.

The Arizona Diamondbacks and Baltimore Orioles start homestands, hoping to find their winning touch after a rough time on the road.

Both the D-backs and O’s lost by identical 10-3 scores on Thursday.

The Diamondbacks set a major league record with their 23rd straight road defeat when they were trounced in San Francisco. Arizona broke a dubious tie with the 1963 New York Mets and ’43 Philadelphia Athletics for road futility.

“It’s nothing we’re proud of,” manager Torey Lovullo said. “It’s been an extended period of time. It weighs on you. It’s heavy.”

Baltimore lost its 19th road game in a row, falling in Cleveland. Manager Brandon Hyde and the Orioles have dropped eight straight overall going into the series opener at Camden Yards against Toronto.

“We’re very frustrated,” Orioles slugger Trey Mancini said. “Nobody likes losing. I’m at the top of the list, I’d say. There’s no room to wallow at this level. You have to get out there the next day and put it behind you and try to win the next game. What’s done is done.”

After a scan of his shoulder showed nothing abnormal, Jacob deGrom and the New York Mets are taking his status day by day.

“We’re not thinking of an IL stint or to do anything,” manager Luis Rojas said.

The two-time Cy Young Award winner left his second straight start with an arm injury Wednesday night, coming out after three perfect innings against the Chicago Cubs with right shoulder soreness. He had an MRI on Thursday that was reviewed by Mets medical director David Altchek and Los Angeles Dodgers head team physician Dr. Neal ElAttrache.

“Both doctors had the same prognosis from the imaging. So it just shows as a normal shoulder that a pitcher would have and there’s no concern,” Rojas said.

Rojas said deGrom played catch Thursday. Still, the NL East leaders aren’t yet ready to commit to him taking his next turn in the rotation.

The right-hander left his June 11 outing against San Diego after six innings because of flexor tendinitis in his right arm. He skipped an outing between April 28 and May 9 due to discomfort in his right lat muscle, then did not pitch again until May 25 while spending time on the injured list with what the Mets said was tightness in his right side.

New York’s medical staff concluded the injuries are not related.

“This is not the same thing. It’s been three different things,” Rojas said. “They’re not connected. One thing is not leading to the other.”

Tampa Bay minor league pitcher Tyler Zombro says he’s in a “very fortunate position all things considered” after getting hit in the head by a line drive earlier this month.

The 26-year-old righty reliever posted Thursday on Twitter, thanking hospital staff, the Rays organization, his Triple-A Durham Bulls and the baseball community for their support.

“Unbelievably grateful to be in the situation I’m currently in,” he said.

Zombro was injured on June 3 and released from the hospital a week later. He is 1-1 with a 3.18 ERA in nine games this season.

“I’m one lucky guy and can’t wait to get back out there (whenever that is)!” he said.