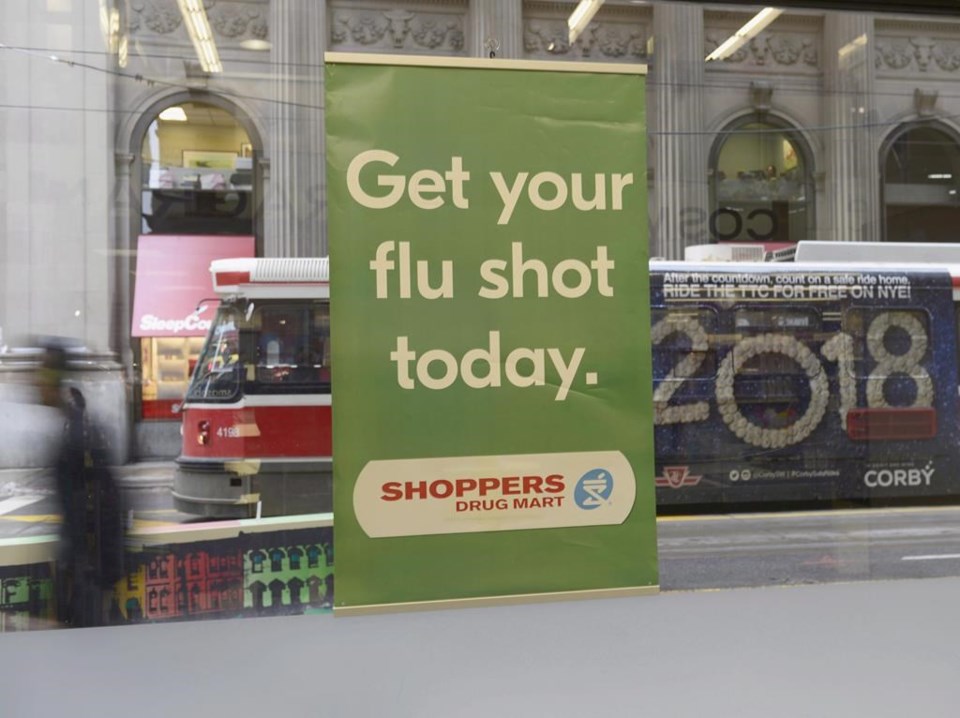 TORONTO — A group representing more than 1,400 Ontario pediatricians is warning of "an imminent crisis" in rolling out the flu shot this season.

An online petition by members of the Ontario Medical Association says there's already "unprecedented strong interest amongst parents for the influenza vaccine."

At the same time, they say it will be impossible for clinics to meet demand while adhering to pandemic precautions, including the need to sanitize between appointments and ensure social distancing.

They suggest several measures, including that the province set up vaccination centres where public health nurses, community pediatricians and volunteer doctors can inoculate large numbers of people.

Dr. Dan Flanders, one of the physician members of the working group behind the petition, suggests this effort be incorporated into the province's COVID-19 testing centres, where a separate area could be dedicated to the flu shot.

Flanders says the flu shot is especially crucial for children aged 0 to 2 years old, who are considered a higher-risk group, and children younger than four who cannot get the shot from the pharmacy.

"Toddlers and young school-aged kids, they're the best spreaders of flu of them all. They're the super-spreaders," says Flanders, owner and executive director of Kindercare Pediatrics in Toronto.

"The fact that there's limited options for the parents of zero to four-year-olds is problematic."

The president of the Ontario Medical Association says the broader organization is also pressing for a detailed flu season plan, anticipating challenges for patients and doctors attempting to identify illnesses with symptoms very similar to COVID-19.

"Previously, a clinic or a pediatrician or a family doctor could vaccinate hundreds of patients in one day. And it's going to be very hard to replicate that indoors, taking all the precautions we need to take for COVID as we move forward," says Dr. Samantha Hill.

Hill says she's aware the province is developing a flu-shot plan and that details are expected soon. Beyond that, she said "we're all waiting with bated breath."

The pediatric group says 30 to 35 per cent of the population typically get the flu shot each year, but is urging Canadians to get vaccinated so those numbers increase to "much higher levels" this year.

But they say that can only be done through large-scale, community-based province-wide flu vaccination clinics.

"This is an emergent public health crisis looming before us," states the Change.org petition, which emerged Saturday seeking 500 supporters and signed by "Pediatrics Section, OMA."

"Government and public health need to step up and help co-ordinate this effort."

Flanders says other measures could include provincial funds to help supply and staff primary care clinics to deliver the shot, or that the province increase how much doctors are paid per shot.

"It's much, much more expensive for us to run our flu clinics because it's a fee-for-service model. If we're only able to give half of the number of shots per clinic then it becomes far more cost-ineffective," says Flanders, estimating the payment per shot is $9 or $10.

"I'm going to be losing money every flu clinic I run. Am I OK with it? No, but I'm still going to do it."

Canada's chief public health officer said Friday that "more than usual amounts of flu vaccine have been ordered" in anticipation of increased demand.

But Dr. Theresa Tam also admitted "the public health system is quite tapped out in terms of response to COVID."

"It's actually a really good rehearsal for actually putting out the mass immunization programs we may need to do for the COVID-19 vaccine," said Tam.

"Everyone is looking at this as a good approach so that we can iron out anything else that we need to do from an implementation perspective."

Flanders notes that very little influenza circulated in the southern hemisphere during its flu season, possibly because of measures to control COVID-19.

He says it's possible that means Canada will see a milder flu season, too, but that we should plan for a bad flu season, as well as the likelihood that the flu, COVID-19 and other respiratory viruses will circulate at the same time.

"The biggest challenge is that there's a lot of unknowns, including the virus's behaviour."

Hill points to rising COVID-19 case counts that are also increasing strain on health-care services, much of which have been put on hold with serious consequences for many patients.

"We have people — mothers and fathers, brothers and sisters, kids — who are waiting for procedures that haven't been done that need to be done. They're not elective, they're just non-emergent. We have people who are at risk because of various lung diseases, we have people who need regular health care and it's all been cut off so that we can deal with this," she says.

"We can't stop now. We have to keep taking care of each other, because what's the saying? Winter is coming."

Note to readers: This is a corrected story. A previous version quoted Dr. Flanders referring to a "COVID clinic" when he misspoke and meant to say "flu clinic."

Fredericton Police say writer RM Vaughan found dead days after going missing
Oct 24, 2020 6:11 PM
Comments
We welcome your feedback and encourage you to share your thoughts. We ask that you be respectful of others and their points of view, refrain from personal attacks and stay on topic. To learn about our commenting policies and how we moderate, please read our Community Guidelines.