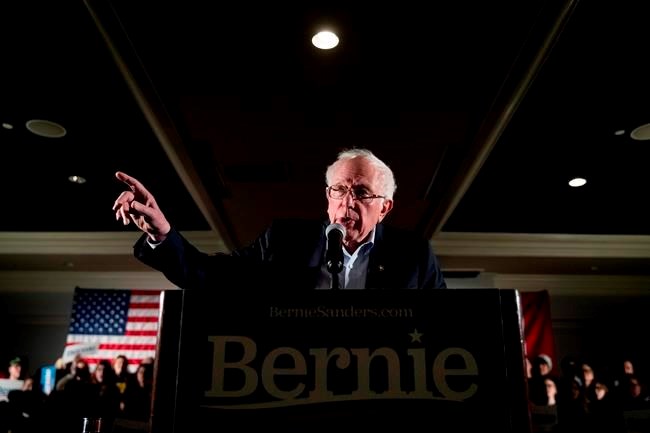 WASHINGTON — A brief, one-sided battle of the sexes broke out Tuesday night in Iowa as Bernie Sanders strenuously denied ever telling Elizabeth Warren that a woman couldn't be elected president of the United States — and the senator from Massachusetts promptly contradicted him.

The confrontation, which came during the last Democratic presidential debate before next month's Iowa caucuses, brought to a head a controversy fuelled by reports accusing the independent Vermont senator of making the remark during a private meeting with his fellow progressive in 2018.

It has also threatened to rupture the long-standing non-aggression pact between the two left-leaning presidential hopefuls, who understand the importance of not splitting the vote among progressive Democrats.

"Anybody who knows me knows that it's incomprehensible that I would think that a woman could not be president of the United States," Sanders said in response to a question from CNN moderator Abby Phillip.

"In 2015, I deferred, in fact, to Sen. Warren; there was a movement to draft Sen. Warren to run for president, and you know what, I stayed back. Sen. Warren decided not to run, and I did run afterwards."

Phillip, however, was having none of it.

"What did you think when Sen. Sanders told you that a woman could not win election?" she asked Warren, prompting a rueful smile from Sanders.

"I disagreed," Warren replied, describing Sanders as a friend as she briefly showed solidarity with a rival on the other side of the stage, Minnesota Sen. Amy Klobuchar.

"Look at the men on this stage. Collectively, they have lost 10 elections. The only people on this stage who have won every single election they have been in are the women, Amy and me."

The crowd erupted, making for a dynamic and electric moment that both Warren and Klobuchar were anxious to capitalize on — especially given the premium that Democrat supporters place on choosing the nominee best positioned to defeat Donald Trump.

It was a perfect segue for Klobuchar, whose status as a moderate is considered one of her biggest advantages.

"I have won in the reddest of districts, I have won in the suburban areas, in the rural areas — I have brought people with me," she said. "Every single person I have beaten, my Republican opponents, have gotten out of politics for good, and I think that sounds pretty good with the guy we have in the White House right now."

Sanders, the gesticulating septuagenarian who, like Warren, champions a big-ticket Medicare-for-all program, entered Tuesday's debate as a narrow front-runner, according to one key Iowa poll. The Des Moines Register/CNN poll put Warren three points back.

Pete Buttigieg, the upstart mayor of South Bend, Ind., found himself in third place, followed by former vice-president Joe Biden, the moderate widely seen by many as the party's best chance to win the White House.

But there have been clear signs Sanders, who has recently been out-fundraising his Democratic rivals, would be a preferred foil for Trump, whose recent rallies and frequent tweets have been mentioning the independent senator from Vermont more and more.

"Should he actually become the nominee, I think that it would definitely change the national conversation significantly," said Capri Cafaro, a politics lecturer at American University in Washington and the former Democratic leader of the Ohio State Senate.

"If indeed a Bernie Sanders or Elizabeth Warren becomes the nominee, does that mean that the nation is more ready than we thought for these progressive policies? Or does it mean that they think these people can beat Donald Trump?"

If nothing else, the poll makes one thing clear — it's tight at the top in the Hawkeye State.

But in the event either one were to find their way to the White House, health-care policy experts scoff at the idea that Americans might someday see a true Medicare-for-all system that would be the envy of their Canadian neighbours.

"American health-care financing is such a convoluted mess that we're not going to be tipping over to a fully funded federal system," said Dr. Allen Zagoren, a professor of public administration at Drake University. Nor would Congress ever go for such a big-ticket item, he added.

"It's virtually unthinkable that that could happen."

Sanders and Warren also disagree over the best way to finance their respective plans, which carry pulse-quickening 10-year price tags of between $20 trillion and $30 trillion.

Warren would implement what she calls an employer Medicare contribution to generate some $8.8 trillion in the first decade. Sanders, fearing such a levy would cripple job growth, prefers his 7.5 per cent payroll tax, designed to hit higher earners harder than lower-income employees.

The debate illustrates another a fundamental difference between the U.S. and Canada, a country where the sanctity of universal health care makes it a subject political leaders would rather avoid. In American politics, it's a mandatory talking point, Zagoren noted.

This report by The Canadian Press was first published Jan. 14, 2020.

Quebec police find bodies of two of four missing French snowmobilers
Jan 26, 2020 1:56 PM
Comments
We welcome your feedback and encourage you to share your thoughts on this story. We ask that you be respectful of others and their points of view, refrain from personal attacks and stay on topic. To learn about our commenting policies and how we moderate, please read our Community Guidelines.