Flights resume after blizzard and analyzing bird poop; In The News for Jan. 22 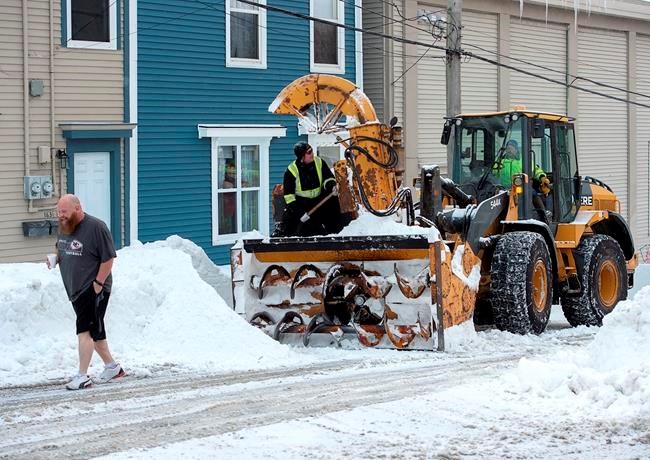 In The News is a roundup of stories from The Canadian Press designed to kickstart your day. Here is what's on the radar of our editors for the morning of Jan. 22 ...

ST. JOHN'S, N.L. — Commercial flights were set to resume out of St. John's, N.L., this morning, as eastern Newfoundland continues to dig itself out from last week's record-breaking blizzard.

Today is the sixth day the provincial capital has been under a state of emergency after a storm dumped more than 76 centimetres of snow on the city.

Hundreds of Armed Forces personnel have been called in to help get things moving again, and Premier Dwight Ball said Tuesday there have been hundreds of calls for assistance from vulnerable residents.

Grocery stores were permitted to open Tuesday, with the City of St. John's advising people to stock up for at least 48 more hours.

It's also given taxi companies the green light to begin commercial operations, though personal vehicles are still ordered to stay off the road.

RCMP announced Tuesday evening that the search for Joshua Wall, a 26-year-old man who's been missing since Friday, has been suspended.

TORONTO — German automaker Volkswagen is expected back in court in Toronto today to plead guilty to environment-related charges.

The company had wanted to enter a guilty plea to 60 charges last month but the case was delayed.

The offences relate to an international scandal in which the company cheated on emissions tests.

The federal government charged the auto giant with 58 infractions under the Environmental Protection Act.

In court last month, defence lawyers said they intended to take responsibility, but the resolution was delayed while three people sought to make victim-impact statements and provide other input.

The daylong session started Tuesday with the setback for Republican Senate leader Mitch McConnell and the president's legal team, but it ended near 2 a.m. Wednesday with Republicans easily approving the rest of the trial rules largely on their terms.

The result is the Trump's historic trial, unfolding amid a watchful public in an election year, is now on a fast-track with almost no signs of Republican resistance to the actions that led to his impeachment.

The House impeached Trump last month on a charge of abuse of power for pushing Ukraine to investigate Democratic rival Biden and his son Hunter Biden as the White House was withholding military aid from Ukraine. Trump also was impeached on a second charge, of obstruction of Congress, in the House probe.

BEIJING — Chinese health authorities are urging people in the city of Wuhan to avoid crowds and public gatherings after warning that a new viral illness infecting hundreds of people in the country and causing at least nine deaths could spread further.

A national health official says 440 cases are confirmed. The nine deaths are all in Hubei province, where the first cases were reported last month.

The illness comes from a new coronavirus that experts say may be spread through the respiratory tract and may be mutating.

A World Health Organization meeting in Geneva later Wednesday will determine whether to declare the outbreak a global health crisis.

OTTAWA — The Malaysian government sent 11 shipping containers of plastic garbage back to Canada recently as the country takes a hard stand to try to keep illegal foreign waste from its shores.

Malaysia's Environment Minister Yeo Bee Yin says her country has taken the "unprecedented" step of sending 150 shipping containers of garbage, mostly plastic waste that cannot be recycled, back to 13 countries, including Canada, France, the United Kingdom, the United States, Spain and Japan.

"The Malaysian government is serious about combating the import of illegal wastes as we do not want to be the garbage bin of the world," she says.

Yeo says Malaysia did not pay for any of the garbage to be returned, saying all of it was paid for by either the exporters or the shipping companies involved. Canadian authorities won't say whether the federal government bore any of the cost for the Malaysian shipments.

Last spring Canada spent more than $1.1 million to bring 69 containers of illegally shipped garbage back across the Pacific from the Philippines.

Canada finally agreed to bring it back after Philippine President Rodrigo Duterte threatened to declare war on Canada and cut off diplomatic ties until the garbage was returned.

A team of Canadian scientists have poked through hundreds of years of bird droppings to suggest an answer to one of the toughest problems in conservation.

The researchers looked into lake sediments amid the world's largest colony of storm petrels on a remote island off Newfoundland.

The seabird is now considered threatened.

Because petrel droppings wash into a lake, the team was able to use those sediments to estimate bird populations going back almost 2,000 years.

The technique is important because long-term population data is very difficult to get, but crucial to understanding what's normal.

Scientists say the technique can be used anywhere there's a large bird colony and a nearby lake.

Matthew Duda of Queen's University, one of the researchers, says the core samples don't smell — very much.

A "Buy Canadian" advertising campaign focusing on local food and the national agricultural system will be rolling out in the coming months, the federal government says. A year ago today, the Canada Food Guide got its first facelift in more than a decade. It recommended that Canadians eat vegetables, fruits, whole grains and plant-based proteins — such as legumes, nuts and tofu — more regularly. It also stressed drinking more of what beverage?

(Keep scrolling for the answer)

A 17-year-old gunman killed two teen brothers at a home in La Loche, Sask., then went to the community school and killed a male teacher and a female aide and wounded seven others before he was apprehended there by RCMP. The teen pleaded guilty to two counts of first-degree murder, two counts of second-degree murder and seven counts of attempted murder.

The Public Health Agency of Canada says none of the country's national vaccination goals were met in any of the age groups surveyed in 2017.

While at least 95 per cent of two-year-olds should ideally be covered, researchers found just 75.8 per cent received the multidose vaccine for diphtheria, pertussis, and tetanus. Newfoundland and Labrador and Prince Edward Island were the only provinces to cover more than 80 per cent, while Manitoba and Nunavut were below 70 per cent.

The study says 2.4 per cent of children at two years of age are estimated to be unvaccinated, with Atlantic Canada having the lowest unvaccinated rate at 1.3 per cent, while British Columbia had the highest at 3.9 per cent.

Among seven-year-olds, only girls vaccinated for rubella met the 95-per cent coverage goal at 95.8 per cent, versus 93.8 per cent for boys. That vaccine only requires one dose, compared to two doses for measles and mumps where the national rate was 87 per cent and 86.4 per cent, respectively.

Meanwhile, none of the three routine vaccines for adolescents met the national coverage goal of 90 per cent, although the Tdap booster came close at 89.3 per cent. Kids aged 14 and 17 get up to three routine vaccinations in school-based programs, depending on the jurisdiction, including for hepatitis B and human papillomavirus (HPV).

TORONTO — Netflix says it added 125,000 subscribers in Canada during the fourth quarter as new streaming competition from Apple TV Plus and Disney Plus led to a "more muted" response from customers across the country.

The global streaming company attracted more sign-ups during the period helped by buzzworthy series and several Oscar-calibre films, including "Marriage Story" and "The Irishman." In the prior quarter, it brought in 96,000 new subscribers.

The latest Canadian figures were outlined as part of a broader commitment to provide its investors with a more extensive quarterly report that fleshed out data on growth in key regions.

Water. The revamped guide said water should be the beverage of choice as a way to stay hydrated without consuming calories.

This report by The Canadian Press was first published Jan. 22, 2020.

The latest on protests across Canada in support of anti-pipeline demonstrators
Feb 18, 2020 8:24 PM

PM urges patience, promises reconciliation in face of anti-pipeline blockades
Feb 18, 2020 6:31 PM
Comments
We welcome your feedback and encourage you to share your thoughts on this story. We ask that you be respectful of others and their points of view, refrain from personal attacks and stay on topic. To learn about our commenting policies and how we moderate, please read our Community Guidelines.