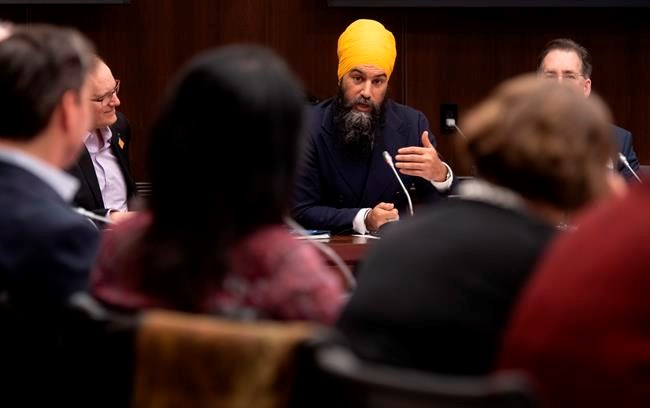 OTTAWA — NDP Leader Jagmeet Singh says he wants to take a "thoughtful approach" to ratifying Canada's new North American trade deal, calling for an exhaustive review of the agreement before deciding whether the NDP will support it — a move that could slow down the Liberals' plan to get it passed quickly.

Singh was in Ottawa Wednesday to begin a two-day planning session with his caucus before the House of Commons resumes sitting next week.

He told reporters the Trudeau government won't get an easy pass from his party on the new U.S.-Mexico-Canada Agreement.

Singh says Canadians were told in the past that Canada got the best deal possible in the initial agreement negotiated with the U.S. and Mexico, but later saw Democrats in Congress make revisions to labour rights and steel and aluminum provisions.

A full debate in the House of Commons and a study at committee will ensure Canadians are getting the best deal possible, Singh said.

"There's still some ongoing concerns about the changes that were made to help protect workers and the environment," he said.

"I'm concerned about the enforceability, and I want to make sure we do an exhaustive debate, a study in committee, to make sure this is a good deal for Canadians."

His government plans to introduce a motion to apply some of its elements Jan. 27 when Parliament resumes, and will table legislation to ratify the deal two days later.

Getting the deal passed in Parliament will be a priority, Trudeau said.

But NDP MPs are not alone in saying they're in no hurry to ratify.

Bloc Quebecois Leader Yves-Francois Blanchet, whose party holds third-place status in the House of Commons, said his MPs will also push for a full debate and committee hearings on the new deal.

That leaves the ball in the Conservatives' court, as the Liberals need support from at least one opposition party to pass any legislation in the current minority Parliament.

Singh says the deal was negotiated in a "behind closed doors, take-it-or-leave-it way," and that Canadians have a right to fully understand all the implications of the trade pact before it's finalized.

He remained on the fence about whether the NDP would ultimately support it.

"If it turns out that this is something that is going to be in the benefit of Canadians, then we'll proceed in the right manner," he said Wednesday.

The NDP leader spent the day behind closed doors with most of his 24 MPs to discuss strategies for the first extended sitting of Parliament since the 2019 election, which begins Monday.

He said the party's focus will be on advancing issues that will make life better for everyday Canadians, including: housing, health care and public transit. They will also push for a national, single-payer pharmacare program and publicly-funded dental care, as well as justice for Indigenous Peoples.

But Singh faced questions about a decision by the party's federal council to postpone its annual convention, which was scheduled for this year, to 2021.

He would not directly say whether this was due to the costs. The party has struggled to keep up with other parties in fundraising.

He also brushed aside suggestions he was trying to avoid a leadership review, saying he has no doubt he has the full confidence of the party.

New Democrats want to be in the best position to run an election given the "volatility" of minority governments, he said.

"We're in a minority and we want to make sure that we are able to do a good job as parliamentarians, but also that our party is in good standing and good health, so we made the decision to push it back."

This report by The Canadian Press was first published Jan. 22, 2020.

The latest on protests across Canada in support of anti-pipeline demonstrators
Feb 18, 2020 8:24 PM

PM urges patience, promises reconciliation in face of anti-pipeline blockades
Feb 18, 2020 6:31 PM
Comments
We welcome your feedback and encourage you to share your thoughts on this story. We ask that you be respectful of others and their points of view, refrain from personal attacks and stay on topic. To learn about our commenting policies and how we moderate, please read our Community Guidelines.