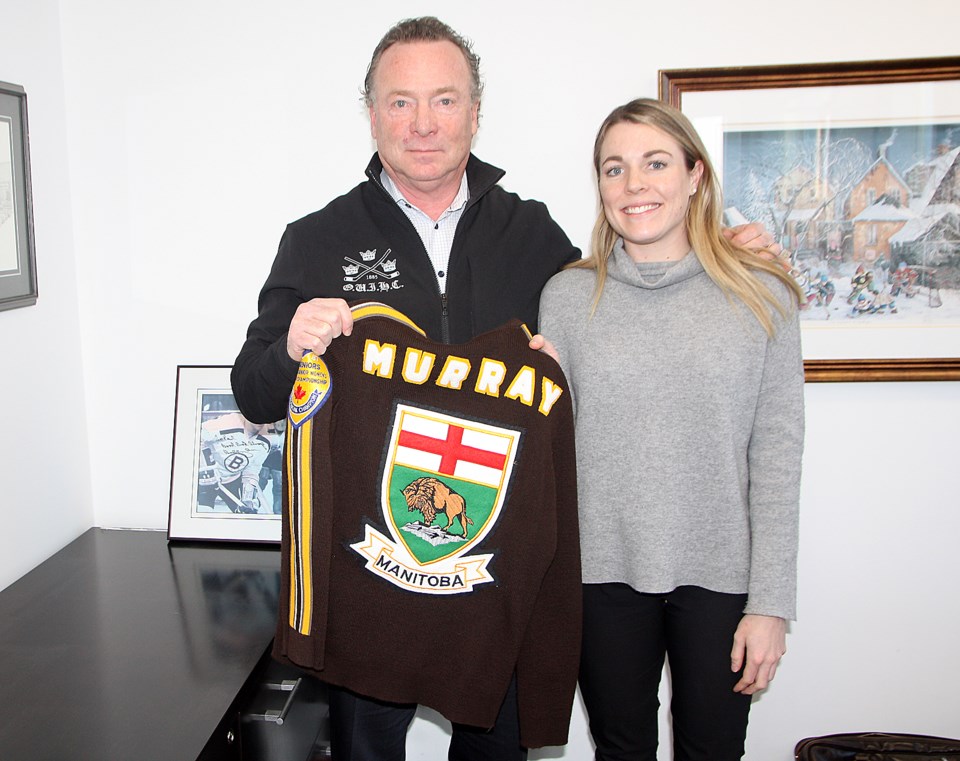 Paul Murray and Logan Murray, both of Murray Chrysler Okotoks, with a sweater worn by Paul's mother, Mildred Murray, when she skipped the Manitoba team at the Canadian Senior Women's championship in 1987. Murray Chrysler Okotoks is supplying vehicles for the teams at the 2020 Alberta Scotties Tournament of Hearts. (Bruce Campbell/Western Wheel)

A major supporter of the 2020 Sentinel Storage Alberta Scotties Tournament of Hearts in Okotoks has been a fan of Canada’s two winter sports — curling and hockey — his whole life.

But there was one time, he kind of got two of the biggest names in the sports a bit mixed up while returning home from overseas.

“I had played a year of hockey in Germany and as I recall Brandon was hosting the Brier,” said Paul Murray of Murray Chrysler Okotoks. “I think I called home from the Winnipeg airport to talk to my parents and this guy answers and I didn’t know who it was.

“It turns out my parents were boarding him at our house for the Brier.”

Murray Chrysler Okotoks is supplying a van to each of the eight teams competing in the Scotties. A volunteer will drive the teams to where they need to go.

Helping the roaring game is giving back to his curling roots.

“I thought that’s near and dear to my heart. Even though my family is a big hockey family, there is a lot of curling in our background.”

His mom was Mildred Murray, and her sister was Mabel Mitchell. The sister-in-law was June Clark. They won the national senior women’s title in 1983, in Guelph, Ont.

“I used to love to watch her play as a kid and that was back in the days, of course, of the old straw brooms,” Murray said. “I remember being so proud of her to be able to play at that high level. Plus she raised four kids and was president of the school board.

“A busy, busy gal. She’s still alive... When I told her what I was doing for the Scotties, she was thrilled."

Murray curled for a number of years, before focusing on hockey.

He went on to play for the U of C Dinos (coached by George Kingston, the first coach of the San Jose Sharks). Murray also played professionally in Germany.

When he was done with hockey, he went to work at the family dealership in Brandon and curled for about 10 years.

“We used to go to the one and two-sheet bonspiels and that was a lot of fun,” Murray said. “I remember having curling lessons with Don Duguid. He was the best in Canada back in the early 1970s.”

Murray is still a fan of the roaring game. He plans to have him and the Okotoks Chrysler staff attend the event.

“We’re eager to watch it – they are great curlers,” he said. “We are very happy to participate.”

As for Bobby Orr?

There is an autographed photograph of Orr in Murray’s office.

For the latest on the Scotties go to https://www.okotokstoday.ca/2020-alberta-scotties

Junior curlers hit the Scotties ice
Jan 26, 2020 4:10 PM
Comments
We welcome your feedback and encourage you to share your thoughts. We ask that you be respectful of others and their points of view, refrain from personal attacks and stay on topic. To learn about our commenting policies and how we moderate, please read our Community Guidelines.