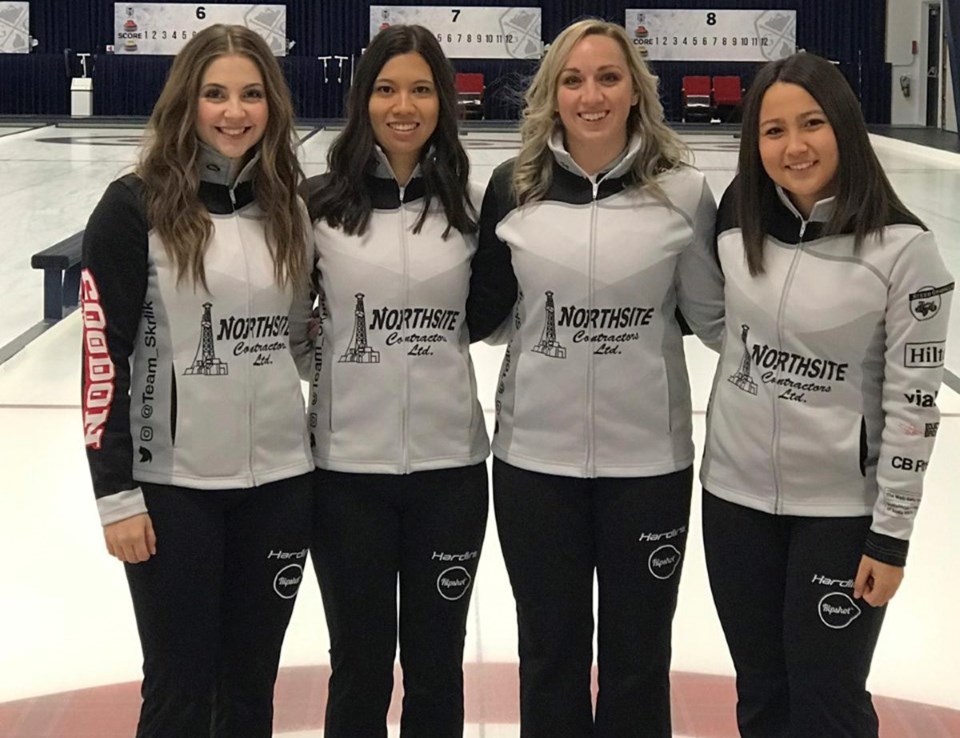 Team Skrlik hopes to continue to excel when the Alberta Scotties take over Okotoks.

In its first year together, Team Skrlik quickly found its footing with victories at the Good Times Bonspiel and Medicine Hat Charity Classic and booked its ticket to the 2020 Sentinel Storage Alberta Scotties as the second-ranked team in the Excel Points, behind only Lethbridge’s Casey Scheidegger.

“It means everything, it was my goal from really young to compete in an Alberta Scotties for the first time,” said skip Kayla Skrlik. “I’m here and it’s great. To do it off of the Excel Points is an amazing experience. To go and watch everyone else playdown and you already know you have a spot in the Alberta Scotties is phenomenal.”

“Lindsay coached Hope and I in our first year of juniors together, but we didn’t know Brittany super well,” Skrlik said. “We had a couple of conversations together before we decided to become a team and realized we have the same goals in mind, the same work ethic and the same sort of drive to get there.

“It’s been great. We’ve worked super hard to get to where we need to be and we’re on the ice all the time. It’s awesome that we get to have some success in our first year out of junior.”

The team, which curls out of Calgary’s Glencoe Curling Club, also took their game international, having competed at the Changan Ford International Curling Elite in Xining, China in December.

“It was great, we got arena ice, which was super awesome and exciting,” Skrlik said. “We got some international travel, we went to the Great Wall, we spent some time in Beijing. The whole event was great.

“We had an international ice-maker at the event, we were on time-clock, we had officials. It was a phenomenal experience going to China.”

Closer to home, Skrlik, along with Sunley, are no strangers to Okotoks ice.

They were the runner-ups at the 2019 Alberta Junior Women’s Championships in January at the Okotoks Curling Club.

Skrlik, from Nampa, Alberta, was bidding for her second straight Junior title having represented the province at the 2018 New Holland Canadian Junior Curling Championships in Shawinigan, Quebec. Okotokian Megan Johnson was the lead on that team that produced a fourth-place finish in La Belle Province.

“We’re super close to home and should have some fans come out and watch us. That will be really exciting. It’s a great way to kick off your first year of women’s to be almost in your hometown.”

Tran is a junior national champion dating back to 2012 with Red Deer’s Jocelyn Peterman rink and competed at the 2019 Scotties Tournament of Hearts as part of the Northwest Territories’ Kerry Galusha rink. Meanwhile, Makichuk won the 2010 Alberta Scotties as the lead for Val Sweeting en route to competing in the national Scotties event in Sault Ste. Marie. Makichuk also skipped her own rink at last year’s Alberta Scotties in Stettler.

“Brittany and Lindsay bring in a whole bunch of experience, which we love,” Skrlik said. “Hope and I going out of juniors into women’s weren’t really sure what to expect completely. We had played a couple of women’s spiels in our junior years, but definitely not anything super serious.”

Skrlik said the team is eyeing a berth in the playoffs in Okotoks, noting how difficult the competition will be across the board.

Five teams have qualified thus far for the 2020 Alberta Scotties — Skrlik, Scheidegger through the Excel Points, Kelsey Rocque as the CTRS leader, along with Laura Walker and Jodi Vaughan out of the first of two provincial qualifying events.

“There’s a lot of great teams in Alberta,” the skip added. “Laura Walker, Casey Scheidegger, Jodi Vaughan, then all of the teams looking to qualify out of Edmonton I can imagine are all going to be great teams.

“We’re doing everything we can to get ready and we’re hoping for the best result we can.”

For more information go to okotokscurlingclub.com

Exhibit celebrates history of curling in Okotoks
Jan 20, 2020 10:45 AM
Comments
We welcome your feedback and encourage you to share your thoughts on this story. We ask that you be respectful of others and their points of view, refrain from personal attacks and stay on topic. To learn about our commenting policies and how we moderate, please read our Community Guidelines.