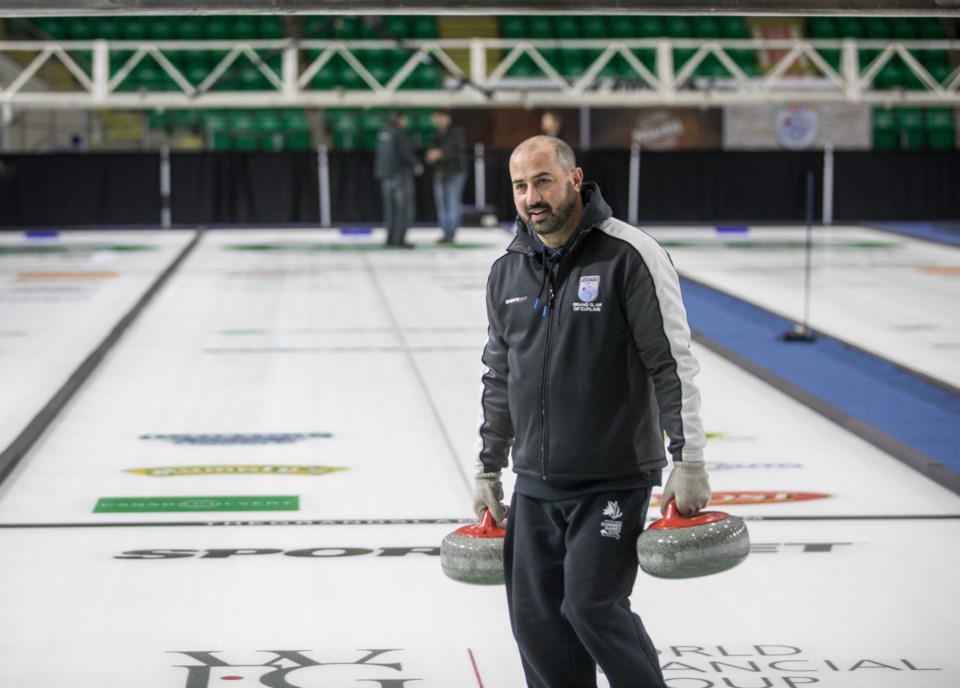 Mike Libbus distributes the rocks to the lanes at the Pinty's Grand Slam of Curling event in Okotoks. Libbus is the head icemaker for the 2020 Sentinel Storage Alberta Scotties Tournament of Hearts. (Brent Calver/Western Wheel)

Okotoks’ reputation for terrific pebbled ice will get a provincial spotlight this month.

Mike Libbus, co-chair of the 2020 Sentinel Storage Alberta Scotties Tournament of Hearts, will put his passion on ice as the head icemaker for the provincial event later this month at the Murray Arena.

“We’re pretty excited,” said Libbus. “Yes we’ve done a lot of events in the past, we’ve been involved with the Pinty’s (Grand Slam of Curling) when it was here in Okotoks and I’ve worked a couple Briers with (Jamie) Bourassa over the years and I’ve learned a lot from the person that I think is the best in the world.

“We expect to do it just like he does it, but we’re excited to put our own touches on it and hopefully we put a good product out there for the players, that’s the goal.”

Libbus cut his teeth as an icemaker at another major event in the Foothills when High River played host to the provincial men’s championship in 2011.

He and fellow icemaker Peter Keenan followed that up by competing at the following provincial championships as one of the southern qualifying teams.

“That was our first taste of working with Jamie Bourassa,” Libbus said. “Both Peter and I were pretty excited back then because we’re icemakers and to do the pebbling at a big event was big. Jamie had confidence in us back then to do the pebbling which kind of sparked our interest to take our icemaking to another level.

“There are probably not a lot of people that pebbled one year and then played the next. So we were lucky that way. Being involved in that started everything."

Libbus and Keenan have taken every opportunity to get involved in big events over the past decade, assisting in competitions from the 2016 Pinty’s Grand Slam of Curling Masters event in Okotoks to the Brier to working overseas.

They’ve learned from the master and will be getting help from one of Bourassa’s disciples in Alberta’s Brett Harkie.

“(Jamie’s) retired from Canadian curling events, he’s spending most of his time in China now,” Libbus said. “Bourassa kind of set us up in the fall to get together (with Brett) and he thought we would work well together and Peter Keenan will be doing it as well.

“The three of us will be doing it together, but I guess I will be in charge.”

Libbus will have his double duties aided by fellow co-chair Atina Ford Johnston once the icemaking role takes centre stage.

Libbus along with a 17 to 18 person crew of dedicated helpers will get the Murray Arena as of Jan. 17 with four days to transform the hockey barn into a curling facility before team practices get underway on Jan. 21.

“They do a great job here in Okotoks so we expect the ice to be pretty (usable) already, but we will scrape off some of the stuff that’s on it, the water’s not quite the same quality that they use in hockey that they use in curling,” he said. “Then we’ll re-flood will de-ionized water. We bring in our own filters and once we get that flooded somewhat level then we’ll paint over the current rings and hockey lines and logos, paint them white and then paint the whole facility white again.”

From there, the boards and rings are installed, the glass and netting removed, and the finishing touches are put in to make for a spectator friendly experience, putting together boxes, a WFG lounge, carpets and equipment for light shows. All of that needs to be set up before the icemakers can finish installing the ice.

It’s a grueling transformation that will require 12 to 15 hour workdays.

That prep work includes ordering paint and other supplies along with monitoring arena temperatures prior to the install.

“We’re pretty lucky, we’ve got a lot of volunteers that always want to be involved with the ice,” Libbus said. “It’s a long time, we’re basically 12 to 15 hours a day for a week straight, but we split them up into crews and have them come in at different times. But as for Brett, Peter and I, we will pretty much be there the whole time.”

For more information go to okotokscurling.com

Junior curlers hit the Scotties ice
Jan 26, 2020 4:10 PM
Comments
We welcome your feedback and encourage you to share your thoughts. We ask that you be respectful of others and their points of view, refrain from personal attacks and stay on topic. To learn about our commenting policies and how we moderate, please read our Community Guidelines.