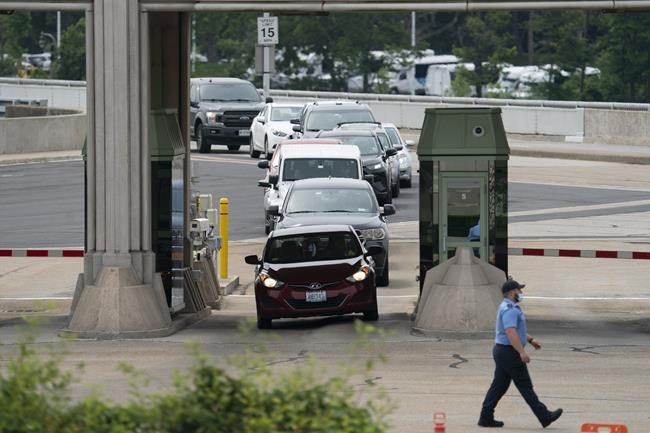 CALGARY — U.S. businesses are waiting anxiously for an expected announcement on when the American border will reopen to Canadian tourists.

"I'll be ecstatic . . . I'm going to hire some people back and take some days off," said Bill Kilby, manager of Hardwick's Country Store in Calais, Maine, located just a few metres from the Canada - U.S. border. "It will be a good day."

Like thousands of businesses on both sides of the U.S.-Canada border, Hardwick's Country Store has been severely impacted by COVID-19 travel restrictions. The land border between Canada and the U.S. has been closed to non-essential travel since March 21, 2020, and the closure order has been extended every 30 days since then.

Kilby said at Hardwick's — where the vast majority of customers pre-pandemic were Canadians grabbing gas, milk or beer — business is down 90 per cent from 2019. He has had to lay off 10 employees

"For my business I rely on the local Canadian people," Kilby said. "The town of Calais is anxiously awaiting their return."

Canada announced Monday that as of Aug. 9, U.S. citizens and permanent residents who are fully vaccinated will be allowed to enter the country, with the rest of the world to follow Sept. 7. However, Canadians are still not allowed to enter the U.S. by land, though they can currently fly.

U.S. lawmakers and business groups anxious to see the travel restrictions eased further have been pressuring the White House to follow Canada's lead. The U.S. is expected to announce a decision Wednesday, when the existing cross-border ban on non-essential travel will expire if it is not renewed.

“I hope the announcement from the U.S. (Wednesday) is they will not extend the land border closure for another 30 days. I would love for that, we’re advocating for that, but I don’t have a prediction,” said Scotty Greenwood, chief executive of the Canadian American Business Council.

Greenwood said her lobby group has been pushing for a reciprocal deal that would see the U.S. open its land border simultaneously with Canada. She said the continued border closure jeopardizes what is a C$700-billion annual trading relationship between the two countries.

"We're in pretty regular dialogue with both governments and all sorts of policy-makers," Greenwood said. "This (border issue) is really important, right across the country, but the border communities do feel it most acutely."

One of those border communities is Point Roberts, Wash., which is located just south of Vancouver, B.C. and can only be accessed by crossing by vehicle through Canada, or by plane or private boat. It is not physically connected to the continental United States.

Nick Kiniski, owner of Kiniski's Reef, a bar and restaurant in Point Roberts, said his business is down 80 per cent from 2019. He added he's not the only local business suffering without Canadian customers.

"The grocery store is just hanging on . . . the gas station, the restaurants, the postal service, all these parcel delivery places – we’ve all been devastated. We don’t even have a fighting chance,” Kiniski said.

He added the past 16 months have been so difficult that he has put his restaurant up for sale after 33 years in the business.

Border experts and political observers have suggested the U.S.-Mexico border likely has a lot to do with why President Joe Biden is dragging his heels on reopening the frontier with Canada.

The southern border represents a much larger political challenge in the U.S. than the northern one, and some in the Biden administration reportedly fear blowback if one opens before the other.

This report by The Canadian Press was first published July 20, 2021.

With files from Kevin Bissett