Kenney faces criticism from doctors, his own caucus, over new COVID-19 health rules 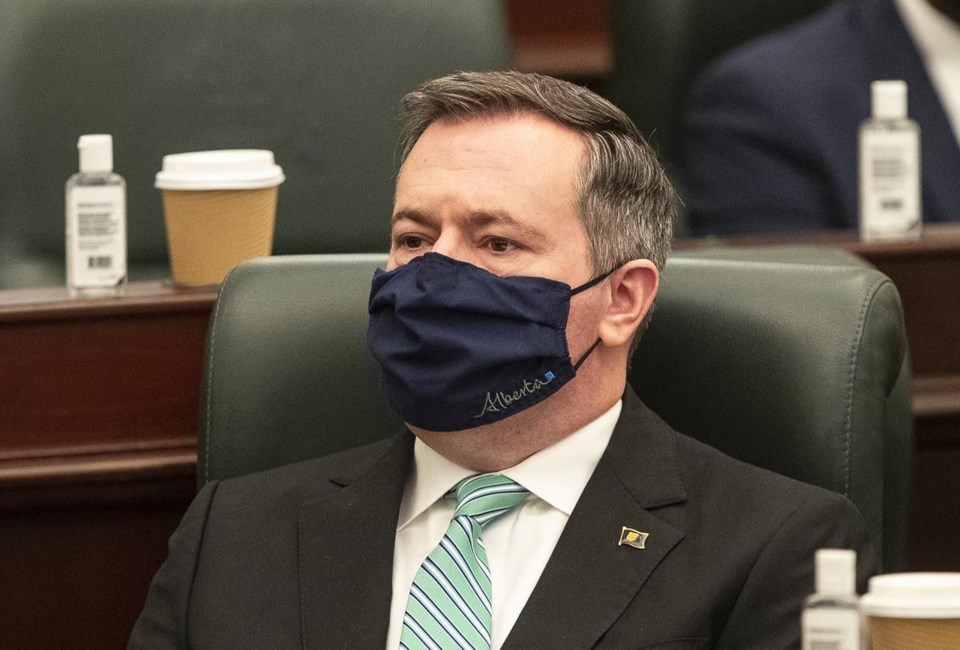 EDMONTON — Alberta Premier Jason Kenney is getting an earful from health experts and from backbench members of his own United Conservative caucus over his new COVID-19 health restrictions.

Several doctors from Calgary and Edmonton say the new rules will not be enough to reduce the spread of the virus during the province's third wave.

At the same time, 15 United Conservative members of the legislature issued a public statement Wednesday condemning the new rules as a step backwards.

Kenney reintroduced the measures a day earlier. He said the move was regrettable but necessary because the rise in the more contagious variant cases, if left unchecked, will overwhelm the health system by the middle of May.

The new measures include closing restaurants to in-person dining and reduced retail customer capacity to 15 per cent. Patio dining is still allowed.

Gyms can no longer host low-intensity group fitness such as yoga or tai chi.

Worship services remain at 15 per cent capacity. Indoor social gatherings remain banned and outdoor get-togethers can have no more than 10 people.

Dr. James Talbot, co-chair of the COVID-19 committee with the Edmonton Zone Medical Staff Association and a professor at the University of Alberta, said those measures won’t get the job done.

"It's not enough to bring the numbers down," Talbot said during a Zoom press conference with several other doctors. "They'll rise more slowly, but they are not going to come down."

Dr. Gosia Gasperowicz, a developmental biologist with the faculty of nursing at the University of Calgary, said cases related to the more contagious B.1.1.7 variant are doubling in Calgary every week.

Gasperowicz said it would take a sweeping shutdown similar to one last spring to even start bending the curve downward.

Alberta now has more than 10,000 active cases, about 43 per cent are variants.

Kenney has faced mounting pressure from members of his caucus to reduce the restrictions or at least vary the approach given that some areas have many cases while others do not.

On Wednesday, 15 of them signed an open letter condemning the latest changes.

“We have heard from our constituents, and they want us to defend their livelihoods and freedoms as Albertans,” wrote the 15.

“We do not support the additional restrictions placed on Albertans yesterday and we will continue advocating for a transparent path forward that provides certainty to Alberta families, communities and businesses.”

Among the letter co-signers were Nathan Cooper, Speaker of the legislature, and Angela Pitt, deputy Speaker.

During question period, the Opposition NDP hammered away at Kenney for not disciplining the 15, accusing him of condoning those who reject public health advice and thereby put Albertans’ health at risk.

Kenney said none of his caucus members are urging people to break the law, adding: “If elected representatives cannot speak their minds about matters of policy, then what are they elected to do?”

Kenney’s government has laboured to keep the economy and public gatherings open as much as possible for the past year, characterizing their mission as protecting both “lives and livelihoods.”

The result has been an accordion-style opening, closing, restriction and relaxing of public-health rules, particularly on restaurants.

Restaurants Canada, speaking for the industry, said in a statement: "We appreciate the decision of the Alberta government to keep patio dining available, as safe options for enjoying outdoor activities are important for people’s mental health.”

But at the Unicorn, a three-floor pub on Calgary's Stephen Avenue pedestrian mall, general manager Paul Worby said they will go from 600 to 30 seats because of the restrictions.

"It's a staggering drop in revenue," said Worby. "It's not going to be a lot of shifts for anybody.”

Also Wednesday, the government shut down GraceLife church near Edmonton, which had been holding large gatherings for months in defiance of public-health orders.

This report by The Canadian Press was first published April 7, 2021.

— With files from Lauren Krugel in Calgary