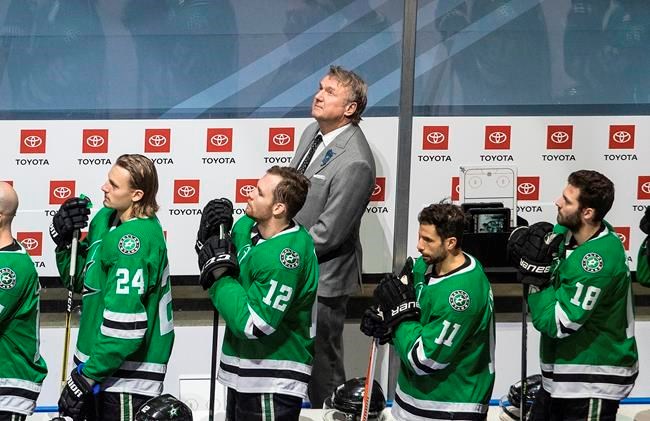 EDMONTON — Dallas Stars general manager Jim Nill says interim head coach Rick Bowness has "earned the right" to come back behind the bench, but says the decision will come after the Stanley Cup final.

"He definitely has earned the right to come back as the coach," Nill told reporters Tuesday on a Zoom call a day after the Stars defeated the Vegas Golden Knights to return to the final for the first time in two decades.

Bowness, 65, has been coaching in the NHL for five decades, the majority of time in an associate role. He has had runs with Phoenix, Vancouver, Tampa Bay, Boston, Winnipeg, the New York Islanders and was head coach in the grisly inaugural season of the Ottawa Senators (10 wins and 70 losses in 1992-93). He spent parts of three more seasons with Ottawa before his departure.

The man born in Moncton, N.B., and raised in Halifax will now have the chance to coach for the first time in the Stanley Cup final as head man behind the bench.

Nill said Bowness's strength is the way he relates to players and gets them to play for him in the high-stress, high-stakes, big-ego pressure cooker of pro sports.

"The most important thing what you see with a coach is how his team plays. And they're playing for (Bowness)," Nill said.

"He does a great job of managing players."

Nil picked Bowness, previously a Stars assistant, to take over after Jim Montgomery was let go in December.

He said Bowness and the other coaches put their stamp on a team that finished the abbreviated regular season fourth in the Western Conference, guaranteeing them a playoff berth in the return-to-play format, with players sequestered in isolation zones in Edmonton and Toronto.

The Stars beat Vegas 3-2 in overtime on Monday in Game 5 of the West final and now return to the Cup final for the first time since losing to the New Jersey Devils in 2000. The Stars won the Cup in '99, beating the Buffalo Sabres.

Bowness has helped bring the pieces together this year for Nill. The Stars have received breakout play from 21-year-old defender Miro Heiskanen and playoff heroics from journeyman backup goalie Anton Khudobin.

Khudobin, 34, made his first playoff start in August in place of an ailing Ben Bishop and has turned in a string of stellar performances.

Against Vegas, he stopped 153 of 161 shots (.950 save percentage) while his teammates scored just one more to take the series 4-1.

Nill said they knew what they were getting in Khudobin when they signed him two years ago, both in terms of technique and personality.

"He's had a lot of different stops, but he's really matured over the last five, six years," said Nill.

"We did our homework as far as his personality. He's infectious. He's one of the best guys you'll ever meet. He fits into any (locker) room. He leads the room. He's a battler."

Offensively, the Stars have been led by captain Jamie Benn (8 goals, 18 points) and blue-line spark plugs Heiskanen and John Klingberg.

Heiskanen and Klingberg, while shutting down the other team, are also igniting the offence. Heiskanen has logged five goals and 22 points while Klingberg has three goals and 16 points.

Of the 62 Dallas goals scored in 21 post-season games, Heiskanen or Klingberg have scored, assisted, or been on the ice for all but nine of them.

While they are the polish, the sandpaper has come from veterans like pre-season signees Joe Pavelski, Corey Perry and Andrej Sekera.

"You go through adversity. They are going to be times when the wheels are coming off the truck and you've got to get them back on. In the end, those players are the ones that keep things focused."

This report by The Canadian Press was first published on Sept. 15, 2020.