"There's no more soft games at the Brier," said Wild Card Two lead Ben Hebert. "Every game (now) is going to have the playoff mentality of the semis and the final."
Mar 12, 2021 2:45 PM By: Canadian Press 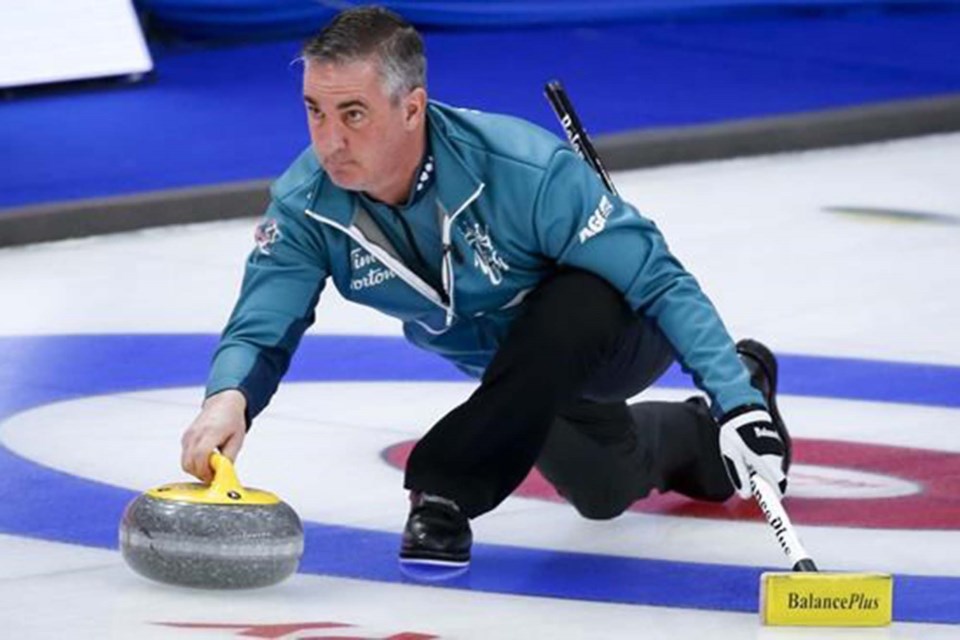 CALGARY — Wild Card Two's Kevin Koe was the first to book his championship pool ticket. Wild Card Three's Wayne Middaugh was the next to make the eight-team cut at the Canadian men's curling championship.

The veteran skips were soon joined by Canada's Brad Gushue, Saskatchewan's Matt Dunstone and Ontario's John Epping on the right side of the cutline. Alberta's Brendan Bottcher, Northern Ontario's Brad Jacobs and Manitoba's Jason Gunnlaugson then locked down the other berths on Thursday night.

"There's no more soft games at the Brier," said Wild Card Two lead Ben Hebert. "Every game (now) is going to have the playoff mentality of the semis and the final.

"We're in a good position going in. I like where we're at."

Koe's Alberta-based team beat Quebec's Michael Fournier to take top spot in Pool B at 7-1. Middaugh's Ontario-based rink edged Manitoba 5-4 in the evening to lead Pool A at 7-1.

Records will carry over to the championship pool. The next cut will come after the Saturday night draw at the Markin MacPhail Centre when the top three teams advance to Sunday's playoffs.

"We just accomplished step one of three ultimately," Dunstone said. "So it doesn't change: the arena, the rocks, everything stays the same come tomorrow."

In Pool A, Bottcher moved into second place at 6-2 with a 7-5 evening win over B.C.'s Steve Laycock. Gunnlaugson and Jacobs, who dropped an 8-6 decision to Middaugh in the morning, took the last two spots at 5-3.

Greg Skauge of the Northwest Territories dashed James Grattan's tiebreaker hopes with a 10-6 win over the New Brunswick skip.

It has been an impressive return for Middaugh, who last played at the Brier in 2013. He was originally tabbed to serve as an alternate but an injury to skip Glenn Howard forced them to switch roles.

"Expectations weren't super high," Middaugh said. "We knew we could make a lot of shots. We weren't sure if we could run with the big guys, it turns out if we play really well (we can)."

"It's a long week," Bottcher said. "It started out OK, I think we're gaining some momentum here and I hope we can take that through into the last couple days."

The Alberta-B.C. evening game was delayed about 45 minutes so that the ice crew could repair a divot.

Laycock smacked his broom on the ice but the pad side was up, creating a significant chip when the hard plastic made contact. The B.C. skip will be fined an undisclosed amount.

Wild Card One's Mike McEwen defeated the N.W.T. 12-3 in an early game between two teams out of contention. It was a disappointing preliminary round for McEwen and his fifth-ranked Manitoba-based team.

""I'm ready to go home to be quite honest," he said after the morning draw. "That's how I feel."

In Pool B, Quebec and Nova Scotia settled for 4-4 marks. Greg Smith of Newfoundland and Labrador was in seventh place at 2-6, Prince Edward Island finished at 1-7 and Nunavut was 0-8.

In Sunday's playoffs, the first seed advances straight to the evening final. The two other teams meet in an afternoon semifinal.

The Brier winner will represent Canada at the world men's curling championship in the same Canada Olympic Park venue.

This report by The Canadian Press was first published March 11, 2021.

Canmore cyclist Sara Poidevin is switching gears to reach next level
Apr 17, 2021 11:45 AM