Meeker, a four-time Stanley Cup champion who passed away over the weekend at the age of 97, made a couple memorable visits during the 1960s to Canmore's Rundle Mountain Trading Company
Nov 11, 2020 12:15 PM By: Jordan Small 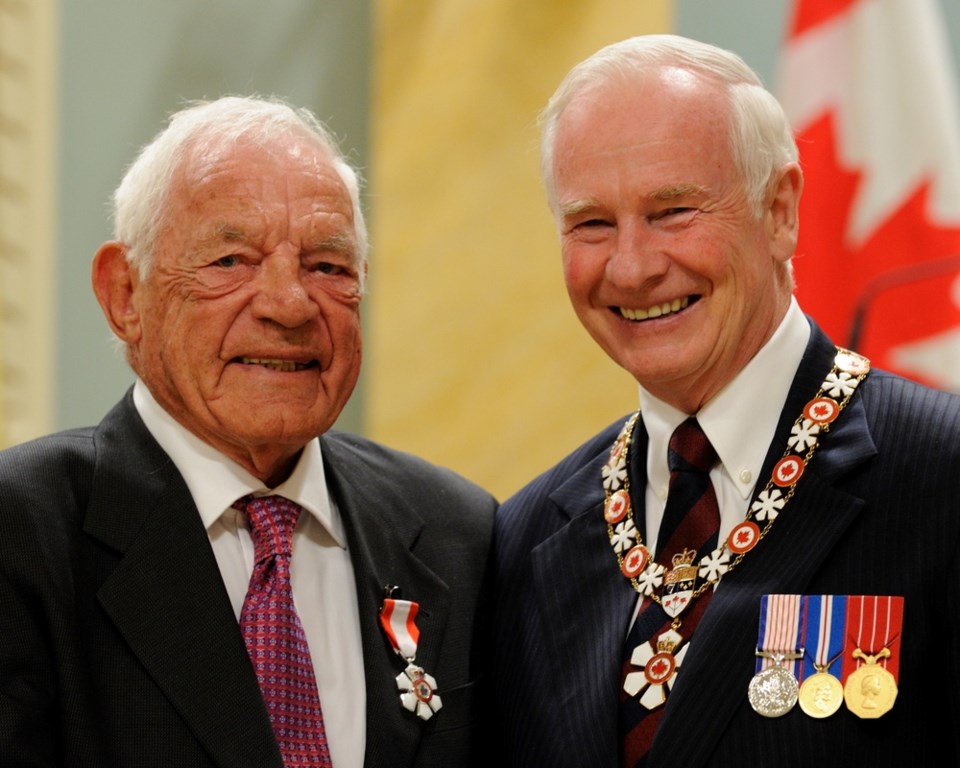 CANMORE – From famous NHL players to legendary broadcasters, Canmore keeps a quiet history of the days when a side-stop to the coal-mining town was a charmed haven for hockey's elite.

One well-known visitor was Howie Meeker, a four-time Stanley Cup champion, colour commentator, and hockey hall of famer. On Sunday (Nov. 8), Meeker died at his home in Nanaimo, B.C. He was 97.

“Howie Meeker connected countless fans to hockey with his wisdom and infectious voice,” said NHL commissoner Gary Bettman in a statement. “The National Hockey League celebrates his life and mourns his passing.”

Born in Ontario and a member of the Toronto Maple Leafs, Meeker moved westward after his NHL career. The late beloved Hockey Night in Canada analyst is remembered locally for frequenting the "noted hockey town," where he'd head straight for the prominent Rundle Mountain Trading Company, a grocery and supply shop on Hospital Hill, what is now Three Sisters Drive.

The store was a hot spot for coal miners, townspeople and travellers passing through the small mountain town. Part of the store's charm was for its revered cheese that came in wooden barrels.

But the shop and its employees also attracted a different clientele and was infamously known for its closed-door hospitality.

“We had these big barrels of round block cheese from Ontario and we had a back room and some refreshments back there,” said Bill Cherak, a former employee of the Rundle Mountain Trading Company. “A lot of famous people sat in that back room and had the cheese and a sip.”

Cherak was born in Canmore in 1929 and has lived in town since.

Twice in the late 1960s, Cherak remembers Meeker visiting to talk hockey with the old mine store’s three employees. Once with a salesman on their way back to Calgary from Banff, and the second time returning by himself.

The conversation around hockey would lucidly end up going into the back room where homemade beverages were made.

“[Meeker] was just a good old guy, that’s all. A lot of old NHL hockey players used to stop and say hello,” said Cherak. "It was short NHL seasons, but if anyone came west, they knew they had to [visit] the old mine store."

In a town known for its hockey history, Canmore is home to modern-day rising star and 2019-20 World Juniors gold medallist Jacob Bernard-Docker, and legendry NHLer Alex Kaleta, best known for his part in coining the “hat trick” phrase when scoring three goals.

“He knew a lot about Alex Kaleta going to the NHL,” said Cherak. “Years ago in Canmore, we had a good hockey team. It was all Canmore people on it.

"For hockey in Canmore and Banff, that was all that was in the valley."

Meeker’s long and renowned story in hockey started in Kitchener, Ont. He was a top prospect primed to make an impact in the NHL after winning the 1942 Ontario Junior B championship with the Stratford Kist-Canadians.

But before playing in the NHL, Meeker joined the army's Corps of Royal Canadian Engineers in 1943 during the Second World War.

In 1944, he was badly injured by a grenade that exploded beneath his legs during training exercises in England.

He recovered from his wounds and miraculously was able to join the Leafs in 1946. He won the Calder Trophy, or rookie of the year award, and in 1947 the Leafs won the Stanley Cup.

The Leafs would win the cup in 1948, ’49, and ’51 with Meeker before he retired in ’54. He was a three-time NHL all-star and still holds the Leafs record for scoring five goals in a game as a rookie.

In the ’70s, Meeker became a television personality and was notably an analyst for Hockey Night in Canada.

According to the NHL, Meeker was one of the first analysts to use a telestrator, a device that allows operators to draw over a moving or still video image. His catchphrase, "Stop it right here," became a trademark.

In 1998, he was presented with the Foster Hewitt Award from the Hockey Hall of Fame and awarded the Order of Canada in 2011.

Olympic champ Kyle Shewfelt laments another COVID-19 closure of gymnastics club
Nov 20, 2020 2:15 PM
Comments
We welcome your feedback and encourage you to share your thoughts. We ask that you be respectful of others and their points of view, refrain from personal attacks and stay on topic. To learn about our commenting policies and how we moderate, please read our Community Guidelines.