"I'm reminded of the tremendous beauty that can come from tragedy and loss. Every act of love for us was felt," said Kurt Leicht, whose son Jacob died in the collision.
Apr 6, 2021 11:45 AM By: Canadian Press 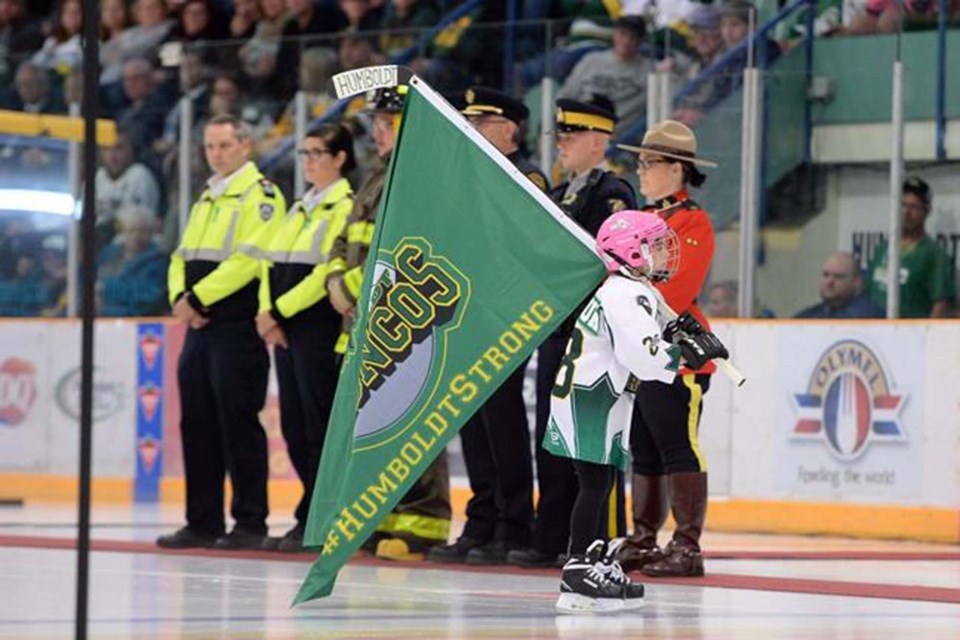 A girl skates with a Humboldt Broncos flag as she skates by first responders during a tribute to the team after their SJHL game against the Nipawin Hawks in Humboldt, Sask., on Wednesday, Sept. 12, 2018. The City of Humboldt has announced an ambitious plan to permanently commemorate the deadly Broncos bus crash. THE CANADIAN PRESS/Jonathan Hayward

HUMBOLDT, Sask. — A Saskatchewan city says it has a plan to permanently commemorate the deadly Broncos bus crash.

The announcement by the City of Humboldt comes on the eve of the third anniversary of the crash, which claimed the lives of 16 people and injured 13 others.

The preliminary plan from the Broncos Memorial Committee includes a $25-million tribute centre, which is to have a gallery honouring the victims as well as an arena and a fitness and physiotherapy area.

"Committee members recognized there was an opportunity to do more than just build a simple, solemn memorial to those who are lost," said Humboldt city manager Joe Day at a news conference Monday.

"There was the opportunity also to celebrate what each of those who were lost really stood for, to celebrate the outpouring of support from around the world, to build something that could benefit the community for generations."

The city says money for the project has to be raised and it will be at least a couple of years before construction gets underway. The plan is to build the centre on city property that already includes the arena where the Broncos play hockey.

Kurt Leicht, whose son Jacob died in the accident, is one of four parents on the committee. He said his family will be forever grateful for the kindness from the general public.

"I'm reminded of the tremendous beauty that can come from tragedy and loss. Every act of love for us was felt," Leicht said.

"To honour each person on that bus and everyone affected by this historical event, building a facility that promotes the very values (head coach) Darcy Haugan sought out to build in this team, will be reflected."

Athletic therapist Dayna Brons was another of the victims. Her mother, Carol Brons, said it was important to remember the positive stories that came out after the crash.

"I hope this permanent symbol of this kindness and love will bring hope and healing to everyone affected by April 6," she said.

It was April 6, 2018, when the driver of a semi-trailer truck ran a stop sign into the path of the bus carrying the junior hockey team at an intersection north of Tisdale, Sask.

A second committee is looking at a roadside memorial at the crash site.

The city says there are some obstacles to having a memorial at the rural intersection, including power lines and road access.

Humboldt's deputy mayor calls the plan for the tribute centre another step forward for everyone involved.

"It's going to be something we can all get behind to influence and provide that positive aspect going forward," said Rob Muench.

"We're really looking forward to this as a next step in this whole healing process."

– By Bill Graveland in Calgary

This report by The Canadian Press was first published April 5, 2021.

Simple tips from Kananaskis Country Public Safety for hiking in the early season
Apr 17, 2021 8:15 AM