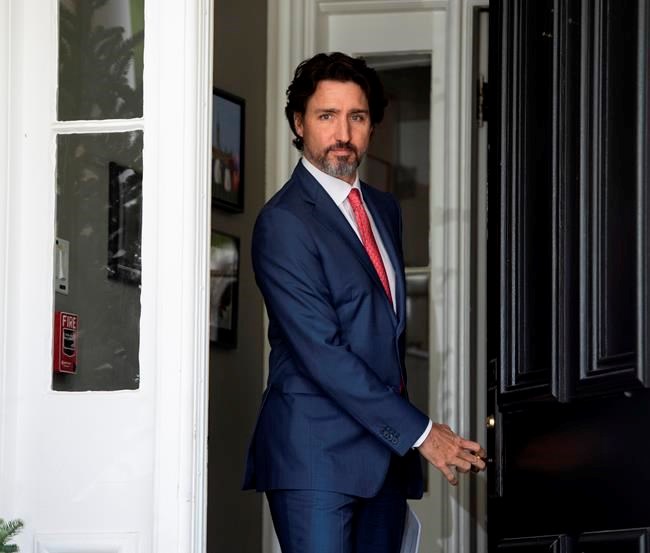 OTTAWA — As Canada's economy slowly emerged from the COVID-19 lockdown, the chief public health officer was cautioning the country to temper its expectations and continue to take precautions to prevent a resurgence of the illness.

Dr. Theresa Tam's caution — which included an updated recommendation for Canadians to wear non-medical masks in public — came Wednesday as Prime Minister Justin Trudeau struck a tougher tone on the need to prevent a second wave of the novel coronavirus and long-term economic damage.

The heightened vigilance, Tam said, was necessary to "buy time" so that a vaccine and other therapies could be found to better curtail the spread of virus over the coming months.

"I know this may not be the grand reopening we might have liked, but we won't get through this on hope alone," Tam said.

Trudeau also hinted the government and provinces are considering tougher surveillance measures in the coming months, especially if Canada's border restrictions are eased and more travellers are allowed into the country.

"A key part of reopening and keeping our economy going and controlling future spreads of COVID-19 will involve being very, very careful that we're not importing new cases, even as our economies open up, even as border restrictions are potentially loosened down the road," the prime minister said.

"We need to make sure we have the measures in place to be able to ensure new cases aren't arriving and spreading through the general population."

Trudeau also leaned on reluctant commercial landlords, urging them to apply for rent-relief programs in higher numbers — and dangling a post-pandemic scenario of empty offices if they don't start playing nice with struggling tenants trying to keep their businesses afloat.

Ontario Premier Doug Ford, for one, has pleaded with "vicious" landlords to be flexible with business tenants during the pandemic.

Trudeau said if more businesses fail, and are unable to "stay in their spaces as we slowly restore our economy," it will be bad for the economic recovery and that will be bad for landlords.

"With many people discovering that we can work from home to a much greater degree there may a lot of vacancies in commercial buildings over the coming months and years. Who knows exactly what the post-pandemic world will look like, exactly?" Trudeau mused.

"We certainly expect landlords to be part of this solution."

The federal government is beefing up efforts to persuade businesses to rehire workers now that Canada's economy is starting to emerge from the COVID-19 lockdown.

It unveiled more details of its promised loan program for large corporations and commercial rent relief for small- and mid-sized businesses.

That includes more information on how businesses can apply for the programs and what conditions will apply.

Wednesday's focus followed last week's extension of the 75 per cent wage subsidy for three months, to the end of August, and Tuesday's announcement that the government is expanding the eligibility criteria for its small business loan program.

The latter program provides interest-free loans of $40,000 for eligible small businesses to cover costs like rent and utilities, with the possibility of forgiving one-quarter of the amount if it is paid off by the end of 2022.

Tuesday's fix extended the program to companies that don't have traditional payrolls, such as family-run businesses that pay themselves in dividends and companies that employ only contractors.

The focus on rent relief and the large corporation loans program is aimed at conveying the same message.

The Large Employer Emergency Financing Facility (LEEFF) was announced last week, aimed at providing short-term bridge financing to companies with $300-million or more in annual revenues looking for loans worth at least $60 million but unable to secure them from banks or other private lenders.

It is to come with strict conditions, for which the government has so far provided few details. Generally, the conditions are to include limits on a company's dividends, share buybacks and executive pay, as well as a requirement that each company account for how they intend to contribute to Canada's targets for reducing carbon emissions.

"We are not offering companies a bailout," Trudeau said Wednesday.

Trudeau has also said applicants whose financial records show signs of "aggressive tax avoidance" will be prohibited, as will companies convicted of tax evasion in the past.

While the LEEFF program was generally well received last week, many companies said they had to wait for the details before knowing whether it would be of use to them.

The government had hoped it would be used by airlines to stay afloat during the pandemic, which has brought air travel to a virtual standstill. But late last week Air Canada announced plans to lay off about 20,000 employees.

Under the commercial rent relief program, landlords are to apply for a 50 per cent subsidy paid for by federal and provincial governments, with tenants paying another 25 per cent. But critics have said many landlords, who would have to accept a 25 per cent reduction in the rent they receive, have refused to participate.

This report by The Canadian Press was first published May 20, 2020.

Lake Louise world cup plans 'moving forward' until further notice
May 26, 2020 4:12 PM
Comments
We welcome your feedback and encourage you to share your thoughts. We ask that you be respectful of others and their points of view, refrain from personal attacks and stay on topic. To learn about our commenting policies and how we moderate, please read our Community Guidelines.