About 200 people attended the all candidates forum in St. Paul, April 9, with questions about carbon tax, the economy, education, running a balanced budget, and more filling up about two hours of time.
Apr 10, 2019 1:53 PM By: Janice Huser 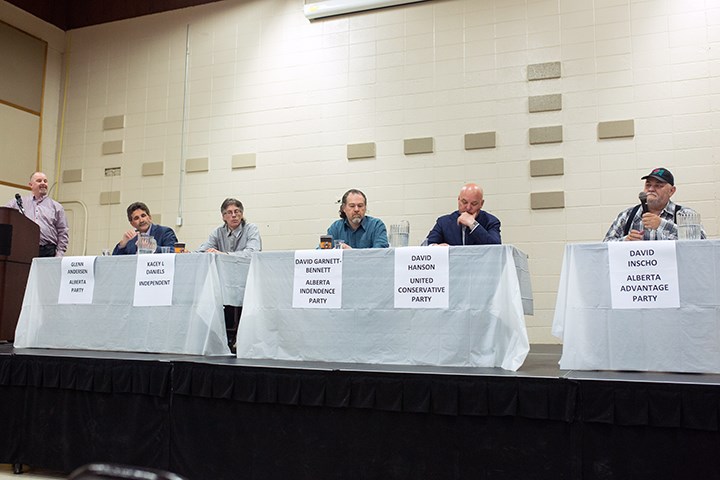 About 200 people attended the all candidates forum in St. Paul, April 9, with questions about carbon tax, the economy, education, running a balanced budget, and more filling up about two hours of time.

The night began with candidates being given six minutes each to speak about their party platform, and introduce themselves.

Speaking first was Andersen. He spoke about the economy, and how the Alberta Party would "fight for the things that matter to Alberta." He pointed to fiscal responsibility, education, childcare, healthcare and seniors being priorities for the Alberta Party, along with addressing crime.

David Inscho then took to the podium. He spoke about focusing on "practical skills" when it comes to education, dealing with crime, childcare and tax benefits for families, and the potential that exists in natural resources in Alberta.

UCP candidate David Hanson noted that a priority for his party is to get people working, along with pushing for improvements to Highway 28 and Highway 881. He also spoke about health care, and the need for wrap-around services in rural areas.

He also noted the UCP would address the carbon tax, and spoke specifically about the amount being paid by local school boards and how that money could instead be used to hire staff, rather than pay a tax.

David Garnett-Bennett spoke about his personal experience working in the oil industry for a number of years.

"I eat, breath and sleep oil patch," he noted. He spoke about the economic downturn, and how the "economy is in trouble right across the board." The Alberta Independence Party focuses on the amount of equalization payments leaving the province and going to other parts of the country.

"Where is our money going?" questioned Garnett-Bennett. Speaking specifically on the need for a pipeline to be built, he said "We have to stop asking permission from Ottawa."

Daniels also introduced himself briefly, noting that he didn't have a party platform since he was an independent but he is a separatist.

The forum began with a couple questions from the St. Paul & District Chamber of Commerce, one of the event organizers, speaking specifically to how each party would engage business in Alberta.

Andersen said he believes the business community needs to be at the table when policy is being implemented and their input it necessary.

Daniels said he believes the provincial government needs to make it easier for business to simply operate, while Garnett-Bennett said he believes in lower taxes for those making less money, and more money in Albertans' pockets.

"If Albertans have money in their pockets, they'll spend it," said Garnett-Bennett.

"It's very important we get this stuff right."

Inscho spoke about reducing to the amount of "red tape" that exists around certain industries, and the importance of making it easier for businesses to get their work done efficiently.

A second question asked about support to municipalities.

Garnett-Bennett spoked about how municipalities shouldn't even have to worry about funding from different levels of governments, and said he believes Alberta is wealthy enough to support its municipalities.

Inscho noted that he believes municipalities are the backbone of the province, and his party would dedicate a certain percentage of funding to municipalities, along with other programs.

Carbon tax was also brought up during the written question period.

Hanson spoke about how other provinces are suing the federal government for overreach, and the UCPs plan to join the fight if elected. He noted that hopefully every other province will join and "we can beat this thing."

Inscho noted that while he didn't support the carbon tax, it does bring in a  lot of funds and pays for long-term contractual obligations.

Andersen said his party would cut the carbon tax from schools, homes, farms, and non-profits, and the tax should only be in place for the "high emitters."

Garnett-Bennett said he felt "there's no common sense for the carbon tax in Alberta."

A question asking if a balanced budget should take priority over things such as health care and education was also posed to candidates.

"There has to be a balance," said Andersen. He noted that while there is a time to look for efficiencies, you still have to spend money in certain areas.

Daniels said he believes Alberta needs to pay debts in a competent way.

Garnett-Bennett said he believes in a balanced budget and when considering the funds that currently go to equalization payments, there would be enough money to put back into Alberta, if that money stayed in the province.

Hanson said the UCP's plan for a balanced budget is supported by economists. He believes the province needs to "bring back the Alberta Advantage."

Inscho noted that his party doesn't advocate any cuts to frontline workers, and there needs to be work done to find efficiencies in the systems.

A question speaking specifically about youth and the development of the next generation of voters was then brought up.

Andersen spoke about the importance of post-secondary education and encouraging people to pursue careers in the high-tech field.

Daniels said he would focus on bringing trades back into high schools, which he believes isn't as big of a focus anymore.

Hanson spoke about how some communities are losing young families at a "horrendous rate" because of the province's poor economy.

"We need to bring our youth back," said Hanson. "We have to maintain our small communities."

Inscho spoke about how without young people "we do not have a community," and noted that kids are not "one-size-fits-all" when it comes to education.

A question regarding seniors and support for seniors was brought forward.

Inscho noted that his focus would be to stop the divorce by nursing home trend that is sometimes seen because facilities can't offer different levels of care under one roof. This results in couples having to live apart at the end of their lives.

He also noted the importance of prescription medications being paid for by the province, so seniors don't have to choose between buying medication and groceries.

Hanson spoke briefly about the Alberta Seniors Benefit, while all candidates agreed that the province needs to take better care of its seniors.

Andersen said the Alberta Party would have a dedicated ministry that deals with seniors.

Support for persons with disabilities was also brought up in the written questions, along with inclusive education

Andersen pointed to St. Paul Abilities Network as being an example that other communities in the province should follow.

Daniels reaffirmed his belief that if Alberta separates then there would be lots of money to support people with disabilities. Garnett-Bennett stated a similar belief, noting that "we have all the resources . . . we have incredible compassion."

Hanson said the UCP supports increases to AISH funding, which should be tied to inflation.

Inscho also said he felt everyone should be able to access the support they need, including people living in First Nations communities, who sometimes have a hard time accessing necessary funds.

Garnett-Bennett acknowledged that when he was growing up, children often shunned those with disabilities. Now, he sees that his own children have benefited from having children with disabilities in their classes, and they don't look at those students as being different.

The question around Gay-Straight Alliances in schools was also brought up, asking what each party's stance was on the issue.

Andersen said he and his party believes members of the LGBTQ community are part of Alberta, and part of Canada, just like everyone else.

"We will support them at all costs," he said.

Daniels said he believes legislation around GSAs is "ridiculous" and follows a "live and let live" attitude, and "don't be a bully."

Garnett-Bennett said he believes in equality, and that "a person is a person."

Hanson simply said Bill 10 (An Act to Amend the Alberta Bill of Rights to Protect our Children) is law and "that's the way it is."

Inscho said his party doesn't support mandatory GSAs, and he personally objects to how the legislation destroys parental rights. He believes parents should be told what is going on with their children while they are at school, and children do not belong to the state.

A question regarding support for women's shelters and those who support people who have experienced domestic violence was also posed.

Inscho spoke about how there has been an increase in violence with the economic downturn, and noted that sometimes these issues can be related to stress. His party would support a continued deficit in this area, and believes in supporting women and children affected by domestic violence.

Hanson noted that Albertans need to address issues related to domestic violence and he supports continued funding for women's shelters, mental health, and addictions. He also believes that getting people jobs is important to help the situation.

Garnett-Bennett said it's disturbing that Albertans seem to be putting things like education against health care, or women's shelters, and believes they can all be supported.

Andersen noted that it's unfortunate to even have to be asked the question about supporting women's shelters. "It's our social responsibility to support programs like this."

The last question of the night came with a few laughs, as candidates were asked about their views on fish management in Alberta lakes.

Andersen noted that before there are limits set on lake, we need to see the reasons for doing so, and believes it should be either everyone can fish on a given lake, or no one can fish on that lake.

Garnett-Bennett said he felt we need to look to First Nations communities and learn from them on how to properly manage lakes.

Hanson said he's attended a number of meetings on the issue of fish management over the last four years, with thousands of people total attending the meetings. Biologists are there, but "they aren't listening," said Hanson.

Inscho spoke about the last time he fished in an Alberta lake in the 90s, where there were countless fish "belly up" in the water due to the amount of catch and release happening since many fish were just an inch too small to keep according to regulations. He said he believes people should be able to take a couple fish home to eat, regardless of size.

While not all the submitted questions were presented to candidates, the event began to wrap up as the time inched closer to 9 p.m. Each candidate was then given three minutes during closing remarks.

Andersen spoke about how voters should be allowed to make a decision without fear mongering and they shouldn't be worried about "splitting the vote."

Inscho spoke about his belief in the right of recall and how MLAs need to be held accountable.

Hanson spoke about how he's heard there's been a massive response already at advanced polls, and said "we cannot afford a split vote in this province."

Garnett-Bennett said he simple believes that "we have to do something different . . . we live in an abundant nation."

Daniels encouraged people to educate themselves before voting and reminded them that "men fought and died in wars so that we could vote."