Hero, it runs in the family. Everyday, brave men and women across the country battle fires that destroy homes, businesses, and wilderness.
Oct 18, 2016 1:00 AM By: Lakeland Today Staff 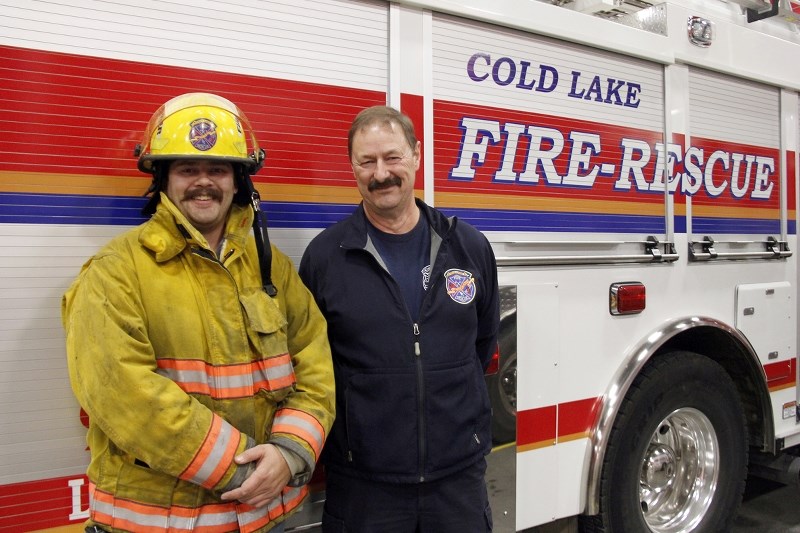 Hero, it runs in the family.

Everyday, brave men and women across the country battle fires that destroy homes, businesses, and wilderness. For four Cold Lake firefighters, watching their fathers work for their community helped guide them into a career they have grown up loving and living: firefighting.

From a young age, Cpt. Tavis McKay knew he wanted to be a firefighter. Maybe it was growing up around fire trucks, hanging out at the fire hall, or watching his dad take pride in what he did. Whatever it was, it laid the groundwork for his future career.

At the age of 23, McKay followed in his father's footsteps and joined Cold Lake Fire-Rescue, and takes pride in his line of work.

“Every since I was a little kid I wanted to (be a firefighter),” he said, adding to him, being a firefighter “means helping others in need, that is all I am here to do, is help others in the community.”

McKay has been with the fire department for 16 years, and is often swapping stories with his dad.

“It's nice to be able to relate to my father's stories,” he noted.

Some of his fondest memories growing up are of getting picked up from school in a fire truck, attending some of the family events hosted by the department, and being at the fire hall in the heart of the action.

Lt. Melvin Griffith joined the Cold Lake Fire Department 22 years ago at the age of 22, and he too has taken a path very similar to his father, who was a volunteer firefighter with the Town of Grand Centre.

Griffith said he can now relate to some of the stories his dad used to share.

“I understand now what he was talking about back then,” he said, adding instead of imagining what those situations would have been like, he now lives them.

Griffith said some of his favourite memories are of hanging around at the fire hall, and playing on the trucks.

“And getting dressed up in the bunker gear, and hoping on the truck and pretending you're a firefighter, those were the best times.”

Being there to assist his neighbours in a time of need is the main reason Griffith joined the department, and he is proud to show the community that there are people here to help.

Deputy Fire Chief Norm Hollis and his son Rodney Hollis fight fires side by side as a father son team.

“I joined to be with my dad and be more like him,” said Rodney. “Ever since I was a kid, when my dad joined the service, I would always go to the fire hall.”

For the past three and a half years, Rodney and Norm have been working together to help put out fires throughout the city.

“I am proud of him. He has become a good firefighter,” Norm said, adding even though Rodney is his son, he treats him the same as any other firefighter.

Norm has been a firefighter for 26 years, and joined after suffering from first, second and third degree burns.

“I was on a dozer making a fire break, when the wind changed directions,” Norm described, adding it was after spending time in the burn unit that he began to grow a strong appreciation for firefighters and what they do.

“That's what made me decide to become a firefighter… I am proud of what I do… If I can prevent just one more person from getting burned, I am doing my job.”

Norm also teaches fire prevention, and said helping train others to perform his line of work is helping future generations.

Looking back, Norm said some of his fondest memories are of being at home when the pager goes off, and heading straight out the door. After making a stop at the fire hall to get into his gear and go, he would often see a comforting presence among the chaos.

“I would get to the scene… and Rodney would be standing there waiting on scene for us to arrive,” Norm described, adding Rodney would hop on his bike after hearing the address to come and watch his dad do what he does best.

“I am just so proud that he is following in my footsteps… I will always be proud of whatever he does.”

Fallow's youngest son, Darren, is currently a firefighter out of the north hall, and is pursuing his passion outside of Alberta's borders.

“I think getting into the fire service was something huge for me, and I certainly appreciate the commodity that comes with that,” Fallows said.

Because of the stiff requirements, Darren has decided to try his luck in Nova Scotia, and recently completed his fitness test.

“I am extremely happy he has chosen this as a career.”

Fallow has been in the service for 28 years, and said he has always been passionate about what he does.

Even when he wasn't working full time as a firefighter, Fallow was often spending his time after work serving the community.

“It's been very rewarding... There's a sense of giving back to the community. You are helping people in their time of need.”