From the oilpatch to the sun farm 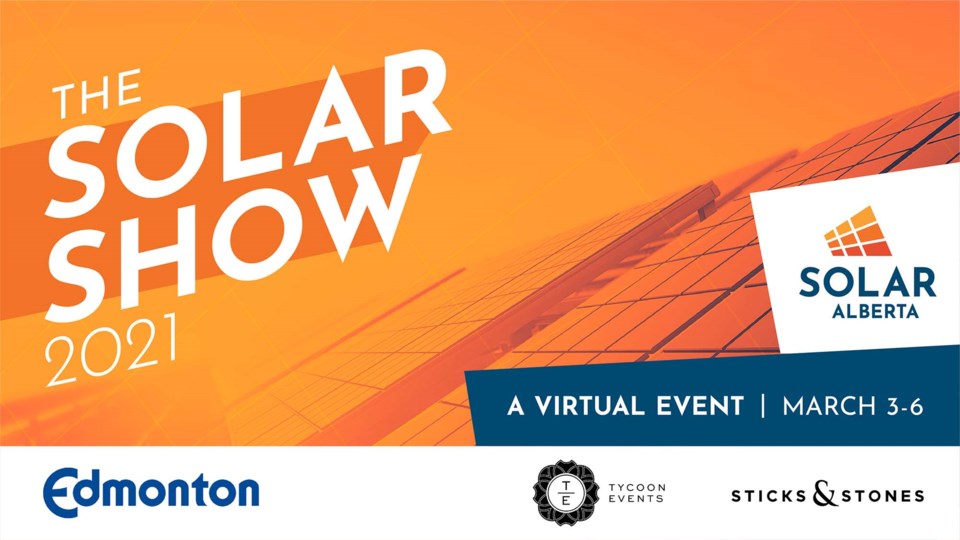 FREE CONFERENCE — About a thousand people are expected to attend this year's virtual Solar Show by Solar Alberta this March 3-6. The online conference will offer free and paid talks on a variety of topics related to renewable energy. SOLAR ALBERTA/Photo

About a thousand people are expected to log into the 2021 Solar Show conference this March 3 to 6. Hosted by Solar Alberta, the event offers free and paid online sessions on energy efficiency, renewable energy and Alberta’s role in the shift to green energy.

“We’re going to have some really exciting panels,” she said, with speakers addressing topics such as climate change, solar panel recycling and deep-energy retrofits.

The conference will also feature an online vendor’s hall and a 50/50 draw, MacKenzie said. Panels from the talk will be posted to Youtube later.

How Albertans are retraining to start careers in the renewable energy sector will be featured in a panel discussion on March 5.

Huge drops in the price of solar panels plus the recent slump in oil and gas have sparked a job explosion in the renewables sector, MacKenzie said. Hundreds attended Solar Alberta’s talks on green jobs, and colleges and universities across the province are offering solar training programs. Seen as risky business just a decade ago, renewable energy has now become the place to be for job security as oil demand falls and climate change concerns rise.

A 2020 study by the Pembina Institute found Alberta could gain some 67,200 jobs this decade in the areas of renewable electricity, transit and electric vehicle infrastructure, energy efficiency, and oil and gas environmental cleanup. That's equivalent to about 67 per cent of all those employed by the oil, gas and mining industry in 2019.

Panelist Alicia Couto said she recently joined up with the green energy specialists at SkyFire Energy after 13 years with the airline industry. Virtually all the people she taught at her energy efficiency class at Lakeland College are moving on from oil and gas, military or other sectors, she said. Most seem drawn to renewables due to the sector’s rapid growth, concerns about climate change and job slumps in oil and gas.

“It’s an exciting time,” Couto said. “I feel we’re on the cusp of another Industrial Revolution.”

Couto said it was easier than ever to get into the industry as so many companies are hiring – solar installation contractor SkyFire alone has doubled in size in the last six months. You don’t necessarily have to put up solar panels either; companies need engineers, electricians, lawyers, marketers, policy makers and more.

“There are so many transferrable skills,” Couto said.

Some workers will have an easier time making the jump than others, said panelist Matt Simard, who got into the renewable industry after working on many solar-powered off-grid oil and gas sites. A pipefitter will need more training than an electrician, for example. Oil and gas workers might also find the sector’s lower pay a hard pill to swallow.

“You’re not going to be making as much money,” Simard said – most of the workers he knows got into renewables because they are passionate about the industry.

While grants and scholarships for retraining could help, Couto and Simard said the best move governments could make to support those who want to move into renewables is to promote the industry.

“I still talk to people who don’t believe renewable energy works,” Simard said. “People need to become more aware that this is a viable industry and it’s growing exponentially.”

Trudeau 'optimistic' that timeline for rollout of COVID vaccines can be accelerated
Mar 3, 2021 11:45 AM
Comments