“We can’t really control what bears do, but we can control what we do— We can try and ensure that the roads, the corridors and the parks are as safe as possible for the wildlife.”
May 21, 2021 12:15 PM By: Chelsea Kemp 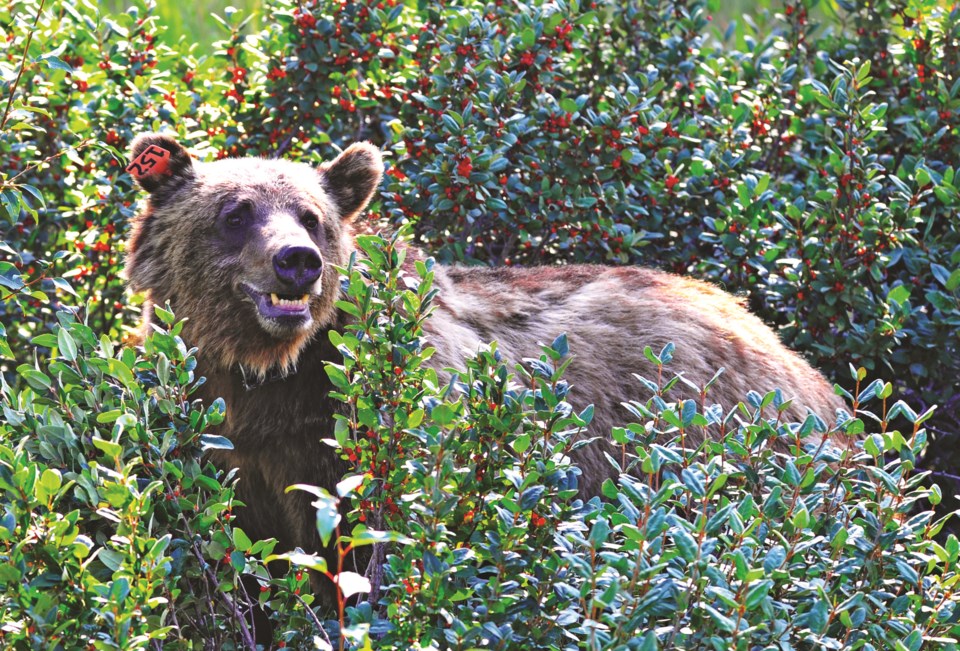 Bear 152 in a buffalo berry patch in Kananaskis Country. The berries are in important local food source for grizzly and black bears each fall. RMO FILE PHOTO

KANANASKIS— Alberta Parks is calling for increased caution from visitors after grizzly bear 152 was hit by a vehicle Thursday (May 13).

The 10-year-old female grizzly is the mother of two cubs. She was struck by a vehicle on Highway 40 in Kananaskis. While she appears to have been injured in the crash she has been moving well and actively feeding on vegetation.

Staff continue to monitor and assess grizzly bear 152 and her health.

The animal is one of many grizzly and black bears that call K-country home, said senior park ecologist with Alberta Environment and Parks in the Kananaskis region John Paczkowski.

“Bear season is on and bears are out— Bears are out of their dens and fully active in Kananaskis country and Alberta,” Paczkowski said.

In Kananaskis alone, there are at least 14 active grizzly bears, including females and cubs, Parks is aware of. Paczkowski added there are an equal or greater number of black bears in the area.

Human and bear interactions pose a risk in the spring, as much of Kananaskis is still covered with snow and muck. These conditions cause bears to migrate to lower elevations that are greening up as spring weather takes hold.

“All the bears are coming down to the valley bottom where the first available food is starting to emerge,” Paczkowski said. “The chances for feeding and food are really limited … They could be active any time of day.”

The sides of Highway 40 are the perfect space for early vegetation to grow, which in turn attracts bears.

It is a critical period for bears and Parks is asking people who visit the area to respect speed limits and obey all traffic signs.

He added that if a bear is spotted Parks is discouraging people from stopping to take photos.

“Please don’t stop and certainly don’t be getting out of your vehicle to get a closer picture … And never try and feed a bear or any wildlife,” Paczkowski said.

Kananaskis has seen an influx of visitors this past year who may not be familiar with the landscape— Last year alone saw more than 5.4 million people access the area. Each weekend the park can see thousands of people visit and there is a need to ensure people are educated in respect to bear safety and safely accessing wild spaces.

Before heading out to Kananaskis, Paczkowski said, he encourages people to research bears, bear safety and general safety when out in wild areas.

“Once you step foot out of your car, you’re in bear country,” Paczkowski said. “Be prepared.”

Paczkowski said for those out hiking it is important to be vigilant, listen and look for signs of wildlife, carry bear spray that is easily accessible, keep children close, keep dogs on leash, travel in groups and make noise to avoid having a surprise bear encounter.

Visitors can also visit the Alberta Parks website for potential warnings and closures of sites due to bear sightings.

Nick de Ruyter, Wild Smart Program director for the Biosphere Institute of the Bow Valley, said it was unfortunate to see a bear hit on Highway 40.

Almost every year they see or hear about at least one bear being struck by a vehicle, de Ruyter said, especially in the springtime.

There is an impetus to be aware of this, drive responsibly and keep an eye out for wildlife at all times of the day.

“Always slow down if you see wildlife along the side of the road because you never know if they’re going to cross or if one is crossing if more will follow,” de Ruyter.

One of the most important actions to take is not stopping to view wildlife on the side of the road.

When multiple people stop to take a photo, it can cause “bear jams” putting stress on the wildlife that can, in turn, cause animals to cross the road raising the danger of them being struck by a vehicle.

While education remains important the need for enforcement may also arise to ensure wildlife is being treated with respect. Together education and enforcement creates the opportunity to ensure people are following rules to the benefit of the landscape.

“Starting with education is key, but sometimes you need to pair that education with enforcement to make people follow the rules,” de Ruyter said.

It is a busy time in Kananaskis as it is bear mating season and deer and elk calving season.

“There’s lots of baby animals running around and they have no idea because they were just born, it’s just another way for them to get in trouble,” de Ruyter said. “It’s really important to obey the speed limits, not drive too fast and don’t stress them [the animals] out.”

A bear encounter can happen to anyone from a first-time visitor to a long-time expert who has been visiting bear country for decades.

“No one is immune. Everybody has to be prepared for those possible bear encounters and do whatever we can to reduce the risk,” de Ruyter said. “We can’t really control what bears do, but we can control what we do— We can try and ensure that the roads, the corridors and the parks are as safe as possible for the wildlife.”

The Biosphere Institute of the Bow Valley is a non-profit that relies on donations and sponsors to provide education and outreach programs for those heading out into the wild to keep people and wildlife safe.

Visit albertaparks.ca or wildsmart.ca for more information on bear safety.

About the Author: Chelsea Kemp

Chelsea Kemp joined the Cochrane Eagle in 2020 as editor, bringing with her experience as a reporter and photojournalist. She writes about politics, health care, arts and entertainment and Indigenous stories.
Read more

Freeland says Liberals will extend aid programs to October because of uneven rebound
Aug 2, 2021 9:15 AM