Election campaigns create many uncertainties. But one thing for certain is that Lac La Biche-St. Paul-Two HIlls MLA Dave Hanson won't be representing the constituency when the votes are counted after the Tuesday, April 16 provincial election.
Mar 28, 2019 1:13 PM By: Rob McKinley 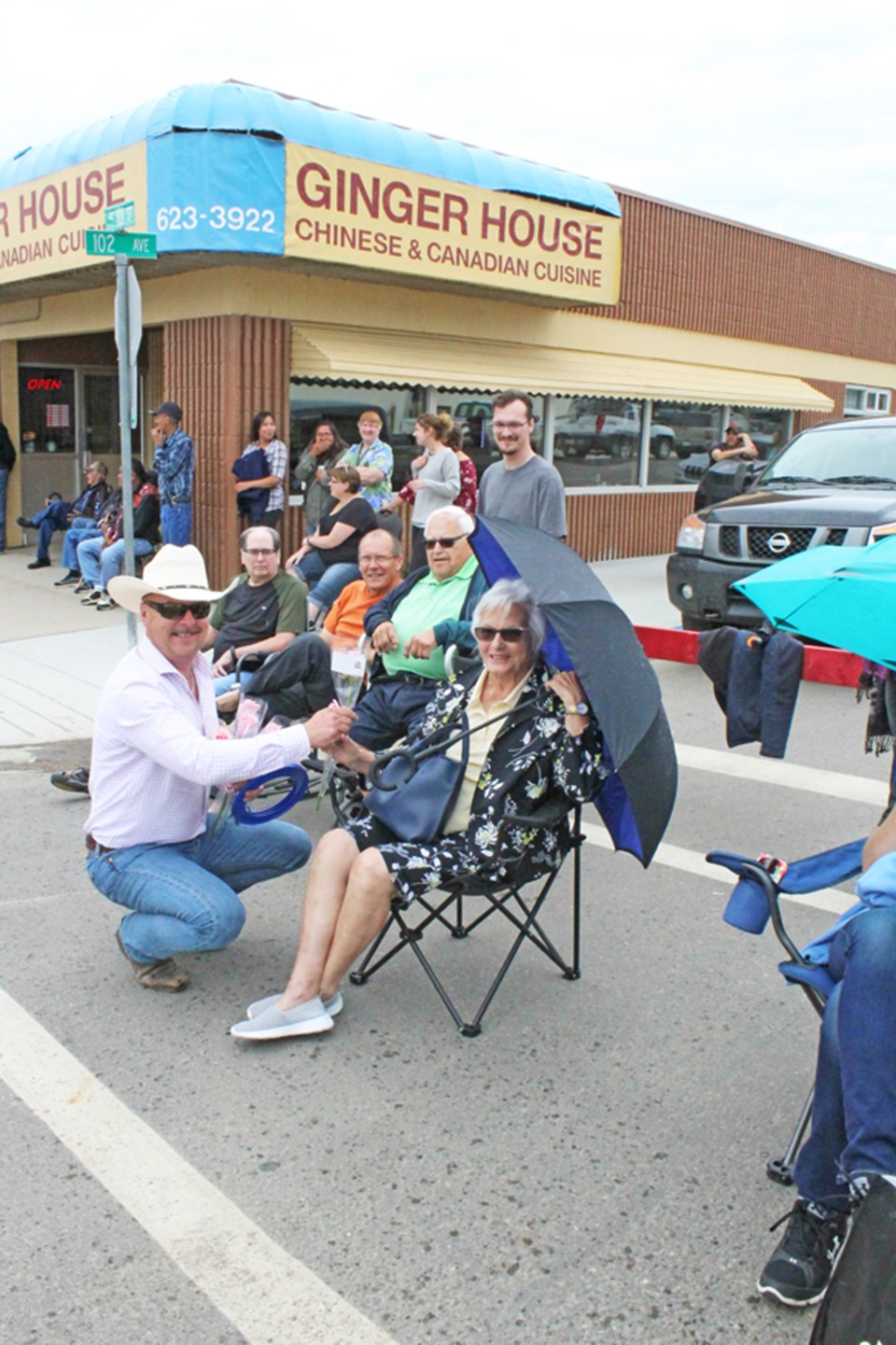 Dave Hanson at a recent Pow Wow Days parade in Lac La Biche stops and chats with one of the event’s original founders.

Election campaigns create many uncertainties. But one thing for certain is that Lac La Biche-St. Paul-Two HIlls MLA Dave Hanson won't be representing the constituency when the votes are counted after the Tuesday, April 16 provincial election.

Anticipating an election call for the last few months — and already earning the UCP candidate designation for the new riding — when Notley made it official last week, Hanson says it was bitter-sweet.

"I really have enjoyed my time representing the Lac La Biche area," said Hanson, giving a lot of credit to the area's strong sense of community. "I'll tell you what, the volunteer organizations and the groups of people that keep thing going in the Lac La Biche area are second to none."

In his term as the area's provincial representative, Hanson was a familiar face at large events and social gatherings.

"I spent more time at events in Lac La Biche than any other community. There is always something going on," he said. "I met a lot of folks and made a lot of friends."

Hanson who lives on the border of the Cold Lake-St. Paul boundaries and the Fort McMurray-Lac La Biche jurisdiction told the POST's sister paper the Bonnyville Nouvelle that he had to chose which area he would run in.

It was his ties to the local area that ultimately made the choice for him. Hanson spent over three decades in the oil and gas industry based out of the Bonnyville area before entering politics.

“We do all of our business in St. Paul, I worked in Bonnyville for over 25 years. It really made the most sense,” noted Hanson in an interview last August.

Hanson's busy schedule in his former riding won't change if he's elected in the new one.

“...Whether you’re a small community like Ashmont or Ardmore, I think people still like to see their MLA if they have a function going on. I try to get out to absolutely everything that I can.”

Hanson told the POST that he still plans to visit the Lac La Biche area, and truly enjoyed his time as the area's MLA.

"I am very proud to have represented the people of that community for the last three and a half years," he said.

In his new riding, Hanson will be taking on former St. Paul Mayor Glenn Anderson, a candidate in the Alberta Party, David Inscho with the Alberta Advantage Party, Jim McKinnon with the Freedom Conservative Party, Independent Kacey Daniels and NDP candidate Kari Whan.

So far, there are several parties competing for the new Fort McMurray-Lac La Biche riding, including Jeff Fafard for the Alberta Party, Brian Deheer with the Green Party, Mark Grinder with the Alberta Independence Party, Jane Stroud with the NDP and Laila Goodridge with the UCP.

Piquette not running in neighbouring riding

On the western border of the constituency, neighbouring MLA Colin Piquette will not be seeking re-election in the new Athabasca-Barrhead-Westlock constituency

Despite calling it “the greatest honour” of his life and “the most amazing job” he has ever had, Piquette announced in a social media statement Feb. 5 that he will not run for re-election after serving one term as an NDP MLA.

He recently told the POST's sister paper the Westlock News that he is bowing out of the race in the Athabasca-Barrhead-Westlock constituency due to family obligations. After months of speculation Piquette announced Dec. 29 he would be running.

“You develop some wonderful relationships with people when you’re on the job, and you do not want to lose that,” he said. “But I am convinced I am making the right decision for myself and my family.”

Piquette won his seat in Legislature May 5, 2015, after defeating then-Tory cabinet minister Jeff Johnson by 1,778 votes.

His father Leo was an NDP MLA for the area for one term in the late 1980s, making them one of only a few parent-child pairs ever to serve as MLAs in Alberta.

Advance polling this year will take place from April 9 to 13 with voters able to cast ballots at any polling station across the province.