Jason Kenney came to Cold Lake to promote his message of a united Alberta. On Tuesday, Oct. 25, Kenney, a candidate for the leadership of the PC party, was at Original Joe's to speak to locals, as part of his campaign tour across Alberta.
Nov 1, 2016 1:00 AM By: Lakeland Today Staff 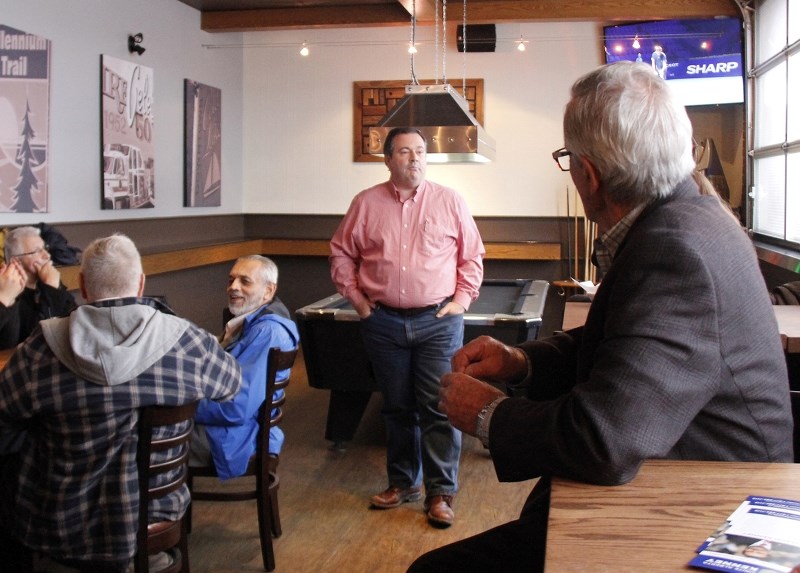 Jason Kenney was spreading the word of a united Alberta, as he made a stop in Cold Lake Tuesday afternoon.

Jason Kenney came to Cold Lake to promote his message of a united Alberta.

On Tuesday, Oct. 25, Kenney, a candidate for the leadership of the PC party, was at Original Joe's to speak to locals, as part of his campaign tour across Alberta.

“I am seeking a mandate for the Progressive Conservatives, as a leader, to achieve unity,” said Kenney. “I am offering my candidacy as a vehicle for unity… please support this campaign now so we can get the ball rolling towards unity.”

A unified party would bring together the Wildrose and PC, and would also include “everyone else who wants to get rid of the NDP.”

“This is open to everybody,” he continued.

Kenney presented his five-point unity plan, which starts March 2017 with the election of a Progressive Conservative leader who has a goal of uniting free-enterprise Albertans. Step two is to begin negotiations of framework agreements with the Wildrose to help create one party.

Next summer, Kenney is hoping to open up the floor for debate leading to a referendum of grass roots members on the agreement. The fourth step will see the approval to proceed in creating a united party for Alberta, including a founding convention.

The final step follows in winter of 2018, where Kenney hopes for a leadership election for the newly formed party.

Kenney used the Saskatchewan Party as an example.

“The free-enterprisers came together in one big broad sensible coalition, they called it the Saskatchewan Party. They have defeated the NDP three times, and made it friendly for investment and hard work… and now Saskatchewan is doing better than Alberta is,” he said.

In order to dedicate his time to his campaign, Kenney has retired his seat as MP, and instead is travelling the province sharing his vision of a united Alberta.

“Somebody had to step up with a plan to ensure the NDP does not get a second term, to avoid the vote splitting, to bring back the free-enterprise family in this province together,” he continued. “Let's focus on what unites us, not what divides us.”

In 1997, Kenney was voted into parliament by Calgary-Midnapore voters.

“I wanted to be a voice for unity amongst free-enterprise Canadians,” said Kenney.

Since then he has worked as the Minister of Employment and Social Development, and Minister of National Defence.

Through his time as Minister of National Defence, Kenney worked on deploying Canadian military to the middle east to help in combating terrorist organizations in the Islamic State.

In October, Alberta voted in the NDP government, and since then, Kenney said, the province has lost over 100,000 full-time jobs.

“There are record levels of insolvency and bankruptcies, and people are hurting,” he explained. “I have had grown men break down in front of me because they are loosing their homes, people mid-career have lost their jobs their severance, their savings, their credit.”

Kenney continued, sharing a story of a 17-year-old boy who approached him at a gas station, asking when he can step up and change the way Alberta is headed.

“He says to me, ‘sir please understand how important this is. My dad lost his oil field job a year ago, he can't find any other work, and he is now getting depressed and I am worried about him,'” said Kenney.

The boy, he explained, told him he was supplying the only pay cheque for the household, and the pressure of the stress was beginning to weigh on him.

“I think about that young man every day, because for me, he represents the stories of tens or hundreds of thousands of fellow Albertans.”

Although Albertans are facing hard economic times, he said, they are also resilient. He continued to add that with the taxes being imposed by the NDP, businesses, schools, and organizations are also suffering, which in turn affects the average consumer.

“It's all economic pain with no environmental gain,” he said.

After his presentation, the floor was open to discussion and questions including the temporary foreign worker program and what Kenney plans on doing about the proposed federal carbon tax.

“During the boom years, there was a very tight labour market and there were a lot of labour shortages,” he explained, adding since then, there has been changes made to the program due to continuing conflict.

“Unfortunately… in about 2012, 2013, we started to see a growing number of pretty serious abuses that was shaking public confidence in that program,” Kenney said, adding some businesses, rather than looking at hiring Canadians for jobs, were hiring from abroad.

Kenney continued, adding it may have been due to the belief that foreign workers were more dependable than young Canadians, who may leave and find other jobs.

“We felt the program had to be a last and limited resort, still available but on a limited basis, so the cabinet decided to make some changes.”

“He has said he is going to take this to the court of public opinion. I wish we had a Premier doing the same,” said Kenney, adding if that doesn't prove successful they will then take it to the court of law.

Only PC members are eligible to voted. From there, will be selected as one of the 15 delegates attending the voting convention. Currently, the party is seeking youth members, who must be between the ages of 14 to 26.

While there are four other individuals who have publicly expressed interest in running for the leadership spot, Kenney is currently the only confirmed candidate for the March 18, 2017 vote.