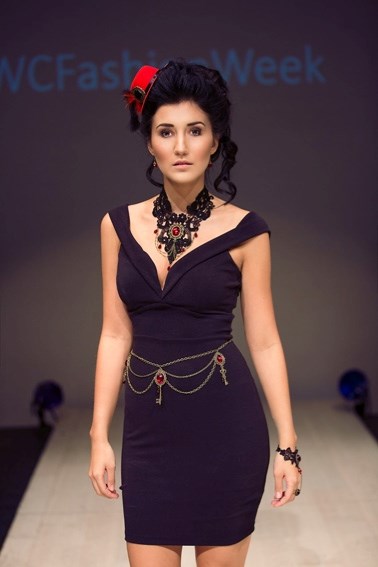 Nadine Friesen, creator of Madame Nadine Jewelry and Accessories, continued her rise through the world of fashion with the debut of her latest collection. On March 29, Friesen joined designers from around the world for the second-largest fashion show in the country - Western Canada Fashion Week (WCFW).

“It was so amazing. It's like a dream,” said Friesen. “I was on the runway with my models and now it's over…It's so quick but so memorable.”

Fellow local designer and owner of the Funky Butt'N Cassandra Newton made her return to WCFW on March 24. Newton was back on the runway to showcase her first collection after winning the emerging designer competition in September 2015.

“Western Canada Fashion Week supplied me with 10 models and a team of hair and makeup artists. I got to open WCFW, we were the first show of the first night and it was my first ever collection so they supplied me with the ways to do that,” said Newton.

She added, “It was phenomenal. The energy backstage is always so much fun and it gets me pumped up to do more design and so much more with my career.”

Both designers take their inspiration from the steam punk style.

For Friesen, her latest collection at WCFW featured of mix of the classic lace jewelry Madame Nadine's is known for and new pieces exclusive for the show. Wanting to show off her versatility, she constructed a variety of accessories from necklaces to belts using materials including chain, keys and pearls.

“I like the lace so I wanted to bring it. With the body pieces, I wanted to try something that nobody saw me doing. I'm well known for my lace but I wanted to show people that I can do other things too. I did some research and then I came up with pieces that nobody's seen before,” explained Friesen, noting that her jewelry was quite well received.

“Two (pieces) were sold right off of the model's back. I went in my changing room with my models and there were some people who wanted to buy the pieces right there.”

Of course, she couldn't do fashion week alone. Designers are required to find their own models, hair and makeup artists, music and photography. To help get more local talent known, joining her at WCFW was Shay Myers of Lux Studio to do the models' hair and makeup, Cindy Couture Photography and G&C DJ Services.

Having her jewelry seen by hundreds was nothing new to the Cold Lake designer. Since starting her lace jewelry in the last two years, Friesen has been invited to not one, but two star-studded events south of the border.

In August 2014, she was in the pre-Emmy gifting suite, offering her jewelry to Emmy nominees, producers and publicists. Following that, last January, 60 pieces of jewelry that was handcrafted in her Cold Lake basement made its way to the pre-Golden Globes gifting suite where it was picked up by celebrities.

Since then, it's been all up hill for Friesen.

“I do more big shows, like comic-cons all over Alberta and Saskatchewan. Boutiques have started asking me to carry more of my pieces. Also, a lot of professional photographers in Alberta want my pieces to shoot and some to go in magazines.”

Newton's fashion career was also propelled by her past success. Since the win at last year's WCFW, her Cold Lake store has seen an influx in customers.

“It has been crazy busy ever since my win in September and since fashion week it has been insane. People coming in, checking out my clothes and bringing in their stuff…I've been getting a lot more requests for custom work. I'm actually booked up for custom work for the next few months now. It's awesome.”

For her first collection to be showcased on the WCFW runway, Newton blended everyday functionality with the steam punk style. Her outfits featured an antique look based around the addition of little gold and silver keys on every piece.

With her first collection behind her, the emerging designer is hoping to continue her run at WCFW, wowing the crowds with a new collection each spring.

“My plan is to keep going every March and hopefully the right people will see my stuff and want to purchase it,” said Newton. “I'm hoping to be able to make pieces to sell in my shop in Cold Lake and, eventually, see it in stores.”

Since both local designers are working around the same steam punk theme, the pair are planning to collaborate. Still in the early stages, as soon as next March Newton and Friesen could be showing off a new combined collection at WCFW.

“I wanted to make some haute couture ball gowns and formal gowns. We thought to collaborate where I make these ball gowns and she makes the jewelry to go with them,” explained Newton.

In the meantime, Newton's skill with the sewing machine can be viewed at her Cold Lake store The Funky Butt'N.

Friesen's handcrafted jewelry and accessories are continuing to gain popularity and can now be found in a number of stores around Cold Lake including Icings Bridal, the I Do Shop and Oasis.

Premier Kenney says new imposed pay plan remains good deal for Alberta doctors
Feb 21, 2020 1:05 PM
Comments
We welcome your feedback and encourage you to share your thoughts on this story. We ask that you be respectful of others and their points of view, refrain from personal attacks and stay on topic. To learn about our commenting policies and how we moderate, please read our Community Guidelines.