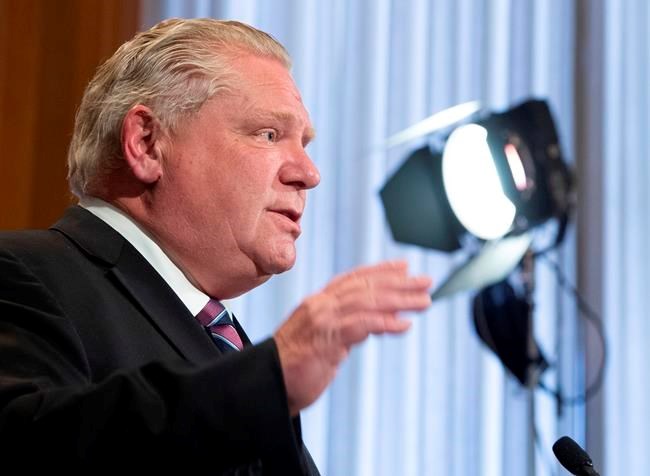 TORONTO — Ontario Premier Doug Ford released a broad outline Monday of how — but not when — the province's economy will reopen, while predicting there will never be a complete return to the old way of life.

The three-step framework for easing restrictions introduced because of the COVID-19 pandemic is "not a calendar, it's a road map," Ford said.

"The steps we are taking are working," Ford said Monday, as figures on COVID-19 in the province showed a third consecutive day of falling growth rates in new cases.

"But progress doesn't mean we can quit now. That's why I won't set hard dates until we're ready, because the virus travels at its own speed."

The three stages will see businesses and workplaces reopen at different times, though likely with distancing measures in place, and restrictions on gatherings eased, though even the final stage doesn't contemplate a return to large sporting events and concerts.

There will be a new normal in Ontario, Ford said.

"I don't think it will ever go back to where it was before, because our lives have changed and we're doing things differently," he said.

Stage one in the framework could include opening select workplaces that can modify operations, such as providing curbside pickup or delivery, opening parks, allowing for more people at certain events such as funerals, and having hospitals resume some non-urgent surgeries.

Cancer surgeries are at the top of that list, said Health Minister Christine Elliott.

Stage three would include having all workplaces open and further relaxing rules on public gatherings — though large ones such as sports events and concerts would still be restricted.

"No one loves sports more than I do and everyone loves a good concert, but again, we're working with these areas," Ford said.

"I don't believe when sports come back they're going to come back with a full stadium anywhere in North America. I think there will be empty stadiums at the beginning."

Each of the three stages will last about two to four weeks, and at the end of each period, the chief medical officer could advise staying in that stage longer, moving onto the next stage or reintroducing certain restrictions to prevent new outbreaks.

Dr. David Williams will be looking for a consistent, two-to-four week decrease in the number of new cases and a decrease in cases that can't be traced back to a source, the framework states.

Ontario reported 424 new COVID-19 cases Monday and 57 new deaths. That brings the total of cases in the province to 14,856, a 2.9 per cent increase over Sunday's total, a third day of falling growth rates.

But Elliott said it's still unclear whether that is a trend or just a coincidence.

Williams would also need to see fewer new hospitalizations and enough acute and critical care capacity in hospitals, including access to ventilators and a good supply of personal protective equipment.

Ontario's intensive care and ventilator capacity is in a good position, Elliott said, though hospitalization numbers have been rising, partly due to long-term care residents being moved to hospital.

Williams would also need to see that public health officials are reaching 90 per cent of people who have come into contact with COVID-19 cases within one day, and a "shift to new and other ways of testing and contact tracing."

The gradual reopening will continue until the pandemic has passed or a vaccine is available, the framework says.

Businesses that reopen will be given guidelines by the government on how to do so safely, including hygiene and sanitation standards and physical distancing measures.

The province recently extended a state of emergency in place since mid-March to mid-May. Public gatherings of more than five people are banned and all non-essential businesses have been closed, as have child-care centres and outdoor recreational amenities.

While health officials have said the community spread of COVID-19 in Ontario is in the peak period, long-term care cases are rising.

There were 17 more deaths reported Monday over the previous day in long-term care homes — information that comes from a separate database — and there are now outbreaks in 150 facilities.

Orchard Villa has seen 48 of its residents die, Eatonville has had 37 deaths, and Altamont has seen 32 residents and one personal support worker die.

Seven other long-term care homes in Ontario have had more than 20 residents die in COVID-19 outbreaks.

This report by The Canadian Press was first published April 27, 2020.

Foothills region parks among those to require new access fee
May 5, 2021 3:30 PM