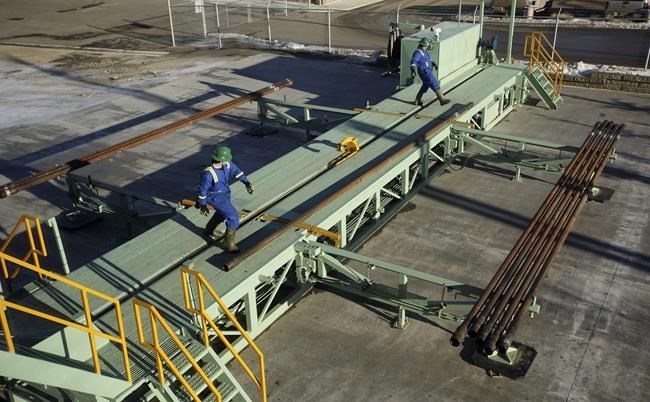 Trainees roll pipe off a catwalk during a training session to lay down drill pipe on a rig floor at Precision Drilling in Nisku, Alta., on Jan. 20, 2016. THE CANADIAN PRESS/Jason Franson

CALGARY — Precision Drilling Corp. missed expectations as its net loss surged in the second quarter to $75.9 million despite an improving energy backdrop because of compensation charges.

The Calgary-based contract drilling company said its lost $5.71 per diluted share, compared with a loss of $3.56 per share, or $48.9 million, a year earlier.

Precision Drilling was expected to lose $4.10 per diluted share on $208.4 million in revenues, according to financial data firm Refinitiv.

The company said its revenues increased due to higher oil and natural-gas prices that strengthened energy fundamentals.

Drilling rig utilization days increased 199 per cent in Canada, compared with the second quarter of 2020, and by 30 per cent in the U.S.

International drilling activity decreased 21 per cent due to the expiration of drilling contracts.

“Our Canadian operations produced second-quarter activity up three-fold from 2020 levels and the strength of the market continues to surprise to the upside," stated CEO Kevin Neveu.

"The outlook for the overall Canadian market over the next 12 months remains exceptionally bright.”

This report by The Canadian Press was first published July 22, 2021.

Companies in this story: (TSX:PD)

Freeland says Liberals will extend aid programs to October because of uneven rebound
Aug 2, 2021 9:15 AM