TORONTO — The rising tide of COVID-19 infections across much of Canada threatens to swamp a hospital system already under strain, the country's top doctor warned Saturday amid case numbers that continued to set records in long-standing virus hot spot
Nov 15, 2020 3:15 PM By: Canadian Press 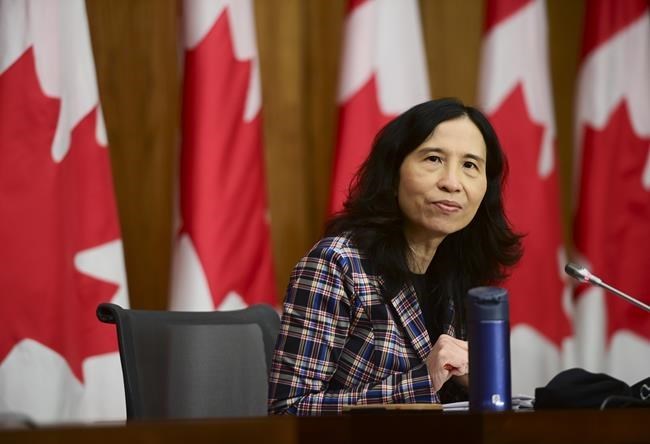 Chief Public Health Officer Dr. Theresa Tam provides an update on the COVID pandemic during a press conference in Ottawa, Friday, Nov. 13, 2020. Canada's top doctor is warning of the increasing pressure placed on hospitals as COVID-19 case counts rise in different parts of the country. THE CANADIAN PRESS/Sean Kilpatrick

TORONTO — The rising tide of COVID-19 infections across much of Canada threatens to swamp a hospital system already under strain, the country's top doctor warned Saturday amid case numbers that continued to set records in long-standing virus hot spots.

Chief Public Health Officer Dr. Theresa Tam described the situation in Western Canada, Quebec and Ontario as "worrisome"  hours after the central provinces posted new single-day highs for provincial case counts. The soaring numbers there and beyond, she contended, have potential to overtax the country's hospitals.

"This situation ... it is putting pressure on local healthcare resources," she said in a statement. "Hospitals are being forced to make the difficult decision to cancel elective surgeries and procedures in areas of the country to manage (increases)."

But in Steinbach, Man., where a day earlier the president of the province's nurses union said nurses reported having to triage patients in their cars at the local hospital because of a lack of space in the Emergency Department, a large group gathered for an anti-mask rally.

Lewis Weiss, a local reeve who spoke at the rally but was not an organizer, said he followed the rules by keeping well away from everyone else but still received a $1,296 ticket from a provincial official for disobeying a public health order.

"We're not protesting masks. We're protesting the way they went about it," said Weiss. "They're closing the little stores in the malls but the big Walmart can stay open."

The province said in an email that it appeared from social media posts that there was enforcement at the rally, but that officers were still at the scene and it couldn't confirm who was handing out tickets.

RCMP Cpl. Julie Courchaine said police partnered at the rally with provincial health officials, who she said were there to "monitor and issue fines."

"RCMP used a measured approach during today's event and will be working with Manitoba Public Health to further investigate breaches of the Public Health Order," Courchaine said in an email.

Tam said the number of people with severe cases of COVID-19 continues to increase with a daily average of more than 1,400 people being treated in hospitals over the past week.

That includes a daily average of 280 people in critical care and 55 deaths reported each day over the past seven days, she added.

But Tam warned that those numbers lag behind overall case increase figures by one to two weeks.

"The concern is that we have yet to see the extent of severe impacts associated with the ongoing increase in COVID-19 disease activity," she said.

Tam said Western provinces saw a weekly increase in daily hospitalization between 24 to 50 per cent compared to last week.

While Ontario and Quebec saw lower increases, those provinces continue to have the highest numbers of people in hospital, she added, saying flu season is also straining hospital capacity.

"This is why it is so important for people of all ages to maintain public health practices that keep respiratory infection rates low," she said.

Tam urged Canadians to follow public health guidelines to limit the spread of COVID-19. At the current pace, it is estimated that there will be 10,000 cases daily by early December, she said.

"What comes next for us this fall and winter is for every one of us to determine, through our decisions and actions," she said.

Tam's warnings come as Ontario and Quebec set new single-day records for new cases in the past 24 hours.

Ontario recorded 1,581 new diagnoses and 20 new deaths on Saturday, while Quebec posted 1,448 cases and 25 deaths linked to the virus.

Manitoba added 237 to its case count, along with multiple deaths tied to a long-term care facility in Winnipeg that's the subject of a provincial investigation.

Saskatchewan reported 308 cases on Saturday, though said the figure was inflated by a testing lull triggered by a snowstorm that kept prospective patients at home. The sharp spike comes a day after the province's daily tally dipped to 81, a low not seen for days.

The surging figures also come as Canadians across the country prepare to start celebrating the Hindu festival of Diwali.

Prime Minister Justin Trudeau was among many political leaders urging celebrants to recognize the holiday virtually this year in order to curb the spread of COVID-19.

"I know celebrations will look different this year," he said in a video statement posted to social media. "But the message at the heart of the day - that light, hope, and knowledge will always triumph over darkness, evil, and ignorance - remains the same, and it has never been more important."

This report by The Canadian Press was first published Nov. 14, 2020.