Edmonton's water utility company, Epcor, said in a statement that workers already take regular wastewater samples, so the effort and risk in gathering extra samples for testing is minimal.
May 22, 2020 7:45 AM By: Canadian Press 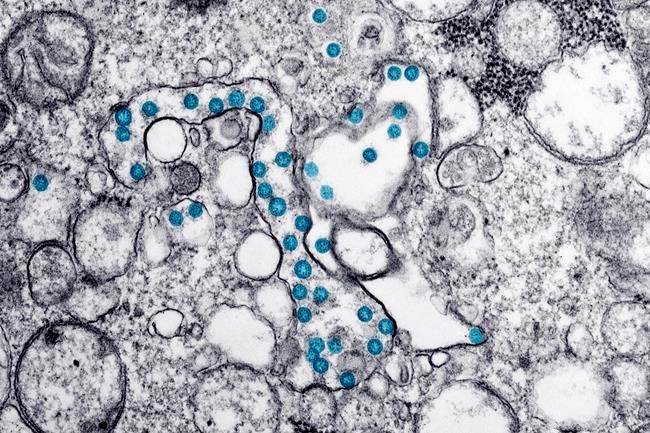 This 2020 electron microscope image made available by the U.S. Centers for Disease Control and Prevention shows the spherical particles of the new coronavirus, colorized blue, from the first U.S. case of COVID-19. Researchers in Canada say the best early-warning system for a second wave of COVID-19 may be right beneath our feet, in the sewers. THE CANADIAN PRESS/AP-Hannah A. Bullock, Azaibi Tamin/CDC via AP

OTTAWA — As Canada continues to struggle to keep up with the level of COVID-19 tests needed to fend off a potential second wave of the viral disease, researchers say the best early warning system for a second wave could be right beneath our feet — in the sewers.

Several other countries have taken to testing wastewater for signs of the novel coronavirus as an indication of flare-ups in their communities.

Now researchers are beginning to look at the option in Canada.

Given that some people can pass the virus on without even knowing they have it, health officials say testing large portions of the population will be key to detecting and quashing any new community spread of COVID-19.

Several provinces have struggled to keep up with the volume of tests needed to do that, particularly in Ontario and Quebec where rates of infection remain high.

But the virus isn't only detected in the back of people's throats. It's also found in waste. And while not everyone will get tested for COVID-19, most everyone uses the toilet.

"This is a tool that can actually provide an early alert to our public health in regards to re-emergence of infectivity in communities," said Mike McKay, the executive director of the Great Lakes Institute for Environmental Research at the University of Windsor.

His research group is one of several across the country looking at whether sampling sewage could be a viable way to alert public health officials to new outbreaks.

Initially, he said researchers were excited about the possibility that measuring the amount of virus found in the pipes could provide some sense of the number of cases in a community.

But not enough is known about how much of the virus is shed in people's waste to be able to draw many conclusions yet.

Instead, researchers hope they'll be able to detect whether the viral load has gone up or down, allowing researchers to flag sudden spikes to public health who will be able to focus their efforts accordingly.

"If it does that, that means it's saving lives," said Bernadette Conant, CEO of the Canadian Water Network.

The network is in the early stages of trying to co-ordinate a pilot project in Canadian cities, including Ottawa, Windsor, Montreal and Edmonton, to develop an effective method and determine whether wastewater tests could have the public health applications they hope for.

The ultimate goal, as the technique evolves, is to use the method to root out new outbreaks in certain neighbourhoods, or even specific buildings, like long-term care homes.

That would allow public health authorities to tailor testing, lockdowns or other containment measures to that area.

"This is not a silver bullet and it's not about replacing the basic testing and contact tracing surveillance," Conant said. "What it does is offer the potential to fill a gap."

The idea was tried in the Netherlands and France in the early days of the epidemic, and according to non-peer reviewed studies, both were able to detect traces of the virus in wastewater before widespread outbreaks were confirmed in those countries.

Several states in the U.S., as well as Australia and Israel, have also looked to the sewers to for signs of the virus.

It's not a totally foreign concept in Canada either. Last year, Statistics Canada released a report on its use of wastewater samples to detect signs of increased drug use.

Accurate information about societal use of drugs, particularly from illegal sources, is difficult to get, the authors explained. So they ran a pilot project to see if sewer systems could give them a better picture.

There were limitations to what the data could tell them, but they said the advantage was the low cost, timeliness and the ability to monitor change over time at the city level — which is what researchers hope to achieve with COVID-19 tests.

Edmonton's water utility company, Epcor, said in a statement that workers already take regular wastewater samples, so the effort and risk in gathering extra samples for testing is minimal.

As for creating a national sewage surveillance system in Canada, Conant said public health officials are beginning to show an interest but logistics, including lab capability and capacity, would still need to be worked out.

This report by The Canadian Press was first published May 22, 2020.

A life in the forest
Sep 26, 2020 12:45 PM
Comments
We welcome your feedback and encourage you to share your thoughts. We ask that you be respectful of others and their points of view, refrain from personal attacks and stay on topic. To learn about our commenting policies and how we moderate, please read our Community Guidelines.