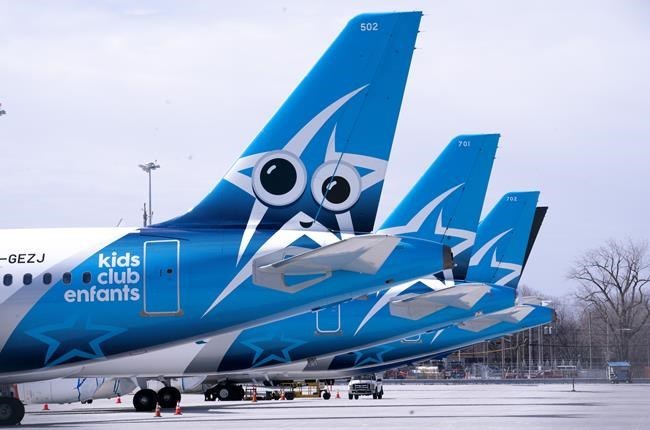 Air Transat aircraft are seen on the tarmac at Montreal-Trudeau International Airport in Montreal, on Wednesday, April 8, 2020. THE CANADIAN PRESS/Paul Chiasson

More than half the current workforce of Air Transat flight attendants were notified last week that they will be temporarily laid off, says the Canadian Union of Public Employees.

In addition to furloughing 128 Air Transat cabin crew, the airline told workers its Vancouver base will be closed as a stopgap measure.

CUPE says last week's layoffs leave only 117 flight attendants working for the month of November, down from 245 in October, 355 in August and 2,000 before the COVID-19 pandemic.

While no flight attendants have been permanently let go, the company is processing "a number of temporary layoffs," Christophe Hennebelle, Transat AT's vice-president of human resources and corporate affairs, said on Monday.

Hennebelle says the company cannot confirm total numbers before everyone has been informed, but that 128 flight attendants were told of the change last week.

In total, the airline said it now has about 1,700 active employees, down from 5,100 before the pandemic.

The airline attributed the decision to a lack of improving prospects for the industry amid Canada’s border closures and a dearth of support programs for airlines.

Transat is not the only company struggling. Air Canada and WestJet airlines combined have laid off or furloughed more than 30,000 employees since March as ridership has plummeted.

For Transat, the latest wave of temporary layoffs comes after all flight attendants were furloughed between April 1 and July 23, dropping the overall head count across the company to a low of 800 workers in May. Some employees have been receiving government wage subsidies while out of the active workforce, and some have been recalled only to be furloughed again.

“Since the beginning of the pandemic, we have been adjusting our staff levels to our forecasted capacity, sometimes calling employees back to work and sometimes unfortunately putting them on temporary layoff,” said Hennebelle.

The union says aviation workers will be holding a protest at Parliament at noon on Tuesday, demanding government support, including rapid COVID-19 screening at Canadian airports.

""All of our information indicates that Air Transat's resumption of activities in the summer and fall of 2020 was totally safe for passengers and staff. A rapid screening system that provides pre-boarding results would be a crucial addition for reviving the airline industry," says Julie Roberts, the president of CUPE's Air Transat component, in a statement.

"What we need is an efficient federal screening program."

— With files from Christopher Reynolds in Ottawa.

Companies in this story: (TSX:TRZ)