Whales and other marine mammals susceptible to COVID-19 through wastewater: study

HALIFAX — Humans first caught the virus that causes COVID-19 from animals and research now suggests it could also be the other way around.
Nov 10, 2020 12:30 PM By: Canadian Press 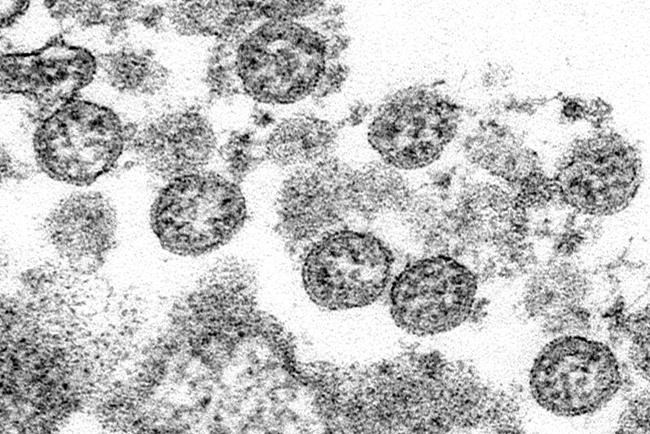 This 2020 electron microscope made available by the U.S. Centers for Disease Control and Prevention image shows the spherical coronavirus particles from the first U.S. case of COVID-19. A new scientific study says COVID-19 could be spread to whales and other marine mammal through improperly treated sewage and wastewater. THE CANADIAN PRESS/AP- (C.S. Goldsmith, A. Tamin/CDC via AP

HALIFAX — Humans first caught the virus that causes COVID-19 from animals and research now suggests it could also be the other way around.

A study published Monday in the journal Science of the Total Environment has found the novel coronavirus could be spread to whales and other marine mammals through improperly treated sewage and wastewater.

"We saw there were dozens of whales and sea mammal species that were predicted to be as susceptible or more susceptible than humans," said Graham Dellaire, a pathologist at Dalhousie University in Halifax.

Dellaire said he's not aware of any actual cases of COVID-19 among whales and seals.

But a genetic analysis found the animals have the same receptor on the cells in their bodies that make humans susceptible to the virus. In fact, modelling the virus's behaviour suggests some animals such as beluga whales are even more vulnerable than people.

At the same time, research is emerging to suggest that the COVID-19 virus is shed in human feces and can live for up to 25 days in water.

"There's definitely an opportunity, if there was steady effluent leaking into a waterway, that live virus could build up along coastlines to a level high enough to potentially infect a marine mammal — particularly those close to shore," Dellaire said.

The study suggests 18 out of 21 whale species are at least as susceptible to the virus as humans. For seals, the figure is eight out of nine species.

Research on other coronaviruses has shown they can have severe effects in marine mammals. Belugas have suffered extensive damage to livers and lungs.

As well, Dellaire points out, many of those animals live together in large groups, which makes transmission of the virus easier.

"It only takes one. It's like a super-spreader event. If they're all hanging out sunning themselves on the beach, one infected animal can spread it quickly."

Treating wastewater with advanced methods — so-called tertiary treatment — removes almost all coronaviruses, the team found. But secondary treatment, which removes solids and organic compounds, only removes three-quarters of them at best.

"Most municipalities that live near the ocean do not have tertiary treatment," said Dellaire.

The problem is worsened by floods or periods of high runoff, he added.

Dellaire said the chances are slight that marine mammals could become a COVID-19 reservoir that could boomerang back to humans. People, with rare exceptions, just don't live closely enough to large numbers of sea animals for that to be a risk.

But there are other concerns.

Scientists found that 15 of the species judged most susceptible to the virus are also species at risk. Two of them — rare dolphins and porpoises in China and California — are on the brink of extinction.

Dellaire said the two-way traffic of viruses between humans and animals is likely to increase as people continue to push into what used to be untouched ecosystems.

"As we move into new environments, this is not the first or last zoonotic pandemic."

This report by The Canadian Press was first published Nov. 9, 2020.