Why a viral TikTok video struck a chord with Indigenous people

The smirk and chin nod as he looks into the camera within the first two seconds of the TikTok video were the first clues that lured Indigenous viewers in.
Oct 17, 2020 10:30 AM By: Willow Fiddler, Local Journalism Initiative Reporter 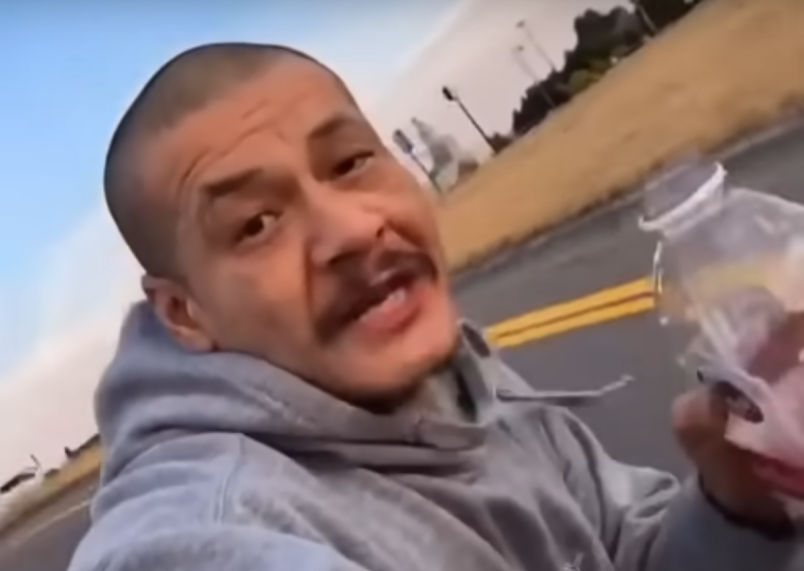 This Oct. 6, 2020 photo released by Ocean Spray shows Nathan Apodaca holding his skateboard while standing in the back of a truck with Ocean Spray products in Idaho Falls, Idaho. Apodaca is enjoying fame from a 22-second TikTok video in which he chugs cranberry juice and sings along to Fleetwood Mac’s “Dreams” while cruising down an Idaho highway atop a longboard. The video has racked up 28 million views and counting since he posted it last month. Ocean Spray, whose juice Apodaca is seen swigging in the video, gave him a new truck stocked with juice this week. (Wesley White/Ocean Spray via AP)

The smirk and chin nod as he looks into the camera within the first two seconds of the TikTok video were the first clues that lured Indigenous viewers in. The eagle feathers tattooed on the back of Nathan Apodaca’s shaved head were the next indication.

Clutching an opened jug of cranberry juice in his free hand, Mr. Apodaca glances behind before merging onto the freeway on his longboard. He then takes a swig of the juice – because let’s face it, a manoeuvre like that calls for a stiff shot straight out of the bottle – before looking back into the camera to lip sync the Fleetwood Mac hit Dreams, granting us the freedom to “play the way we feel it.”

While the 23-second video of Mr. Apodaca – who goes by Doggface on social media – and his chill, positive vibe has reverberated worldwide and created a viral sensation, Indigenous people immediately recognized the signs that he was one of them and are celebrating his overnight success for another reason: the fact that the clip shows an Indigenous person simply being himself. (Mr. Apodaca’s mother is from the Northern Arapaho tribe in Wyoming and his father is Mexican.) And in watching him, they see a reflection of themselves.

Ryan McMahon, an Anishinaabe comedian and media producer from Treaty 3 territory in northwestern Ontario, says Mr. Apodaca’s free spirit and smile represent who Indigenous people are at “its core” and a reminder of “who we’re meant to be.”

“Through our teachings, we are instructed to live through love, the love of ourselves, each other, our families, our communities, our nations,” Mr. McMahon told The Globe and Mail in a message over Twitter.

The video has garnered more than 49 million views on the popular social-media app TikTok and more than 24 million views on the Twitter account @DrewFrogger since it was posted on Sept. 25 – including a retweet from Fleetwood Mac that reads, “We love this!” Rolling Stone magazine reported that Dreams, the second release from the 1977 Rumours album, was back in the charts after hitting #29 in its top 100 (it’s since climbed to #14). The song has jumped into Spotify’s top 10 Global, United States and Canadian charts and Mick Fleetwood himself joined the Dreams challenge on social media – recreating the viral video, seemingly on a skateboard, as he takes swigs of cran-raspberry juice from the jug and lip syncs to the song, on which he plays drums.

The Los Angeles-based talent management company that represents Mr. Apodaca is now flooded with media requests for the 37-year old father of two teenage daughters who was born and raised in Idaho, where he still lives in a “cozy” RV parked in front of his brother’s house.

It was Mr. Apodaca’s daughters, MaKyla, 12, and Angelia,15, who set him up with a TikTok account that now has more than 2.7 million followers (and climbing). The day of the viral video, he was on his way to his job as a labourer at a potato factory when his car broke down, forcing him to jump on his longboard to complete the trip to the tune of Fleetwood Mac.

Earlier this week, Mr. Apodaca was surprised with a new pickup truck full of cran-raspberry juice from Ocean Spray and a local Nissan dealership.

“I’ve never had a truck before!” he told The Globe in a Zoom interview.

And on Thursday, Mr. Fleetwood surprised Mr. Apodaca again with an appearance during his live interview with BBC World News.

“We owe you,” Mr. Fleetwood told a grinning Mr. Apodaca.

“It’s so joyous and fun … and so needed in days that are really challenging. It makes people smile and I’m so happy to be a part of it,” Mr. Fleetwood said about the impact the video has had, adding he hopes to meet Mr. Apodaca one day.

Mr. Apodaca said he feels like “a twinkle in the world’s eye right now."

“Until someone else shines, I’m just going to ride this carpet,” he said about the explosion of attention and fanfare he’s received.

Mr. Apodaca says it hasn’t always been this easy to smile. He says his older brother died in 2007.

He says since then he’s learned to not let “simple BS” and “arguments” get in the way of being happy.

“You do only live once so just make the best of it. I know it’s rough but just take the time to get over it or just make yourself happy inside – go out and dance, go out and do something that makes yourself happy. As soon as you’re at that level you can just shine, it’s just awesome.”

Reg Charging is a Lakota comedian from Standing Rock, S.D., who believes Indigenous people have connected with him partly because of the song.

“Many of us grew up on this kind of music and know Dreams and Fleetwood Mac from our parents, at least many in my generation, anyway,” Mr. Charging said.

He also speculates Indigenous people can relate because of their love for the cranberry drink.

“I can’t speak for anyone but that’s my take on it. I checked my parents fridge and they have [Ocean Spray] in there,” the comedian wrote in a message to The Globe.

The truth is, Doggface is the proverbial uncle who holds a place in many Indigenous communities and families.

Mr. McMahon says much like an “aunty,” an “uncle” is a “dependable and reliable pillar” in many Indigenous communities and someone who can share important teachings.

Mr. Apodaca says he grew up with his “aunties and my uncles just jamming out always" to Fleetwood Mac and other “oldies.”

And for Mr. Apodaca, the teaching is this: “Music heals the soul, you know what I mean," he said.

Willow Fiddler is a Local Journalism Initiative reporter with the Globe and Mail, where this story first appeared.

One crisis after another for Trudeau since last federal election one year ago
Oct 21, 2020 1:30 PM