Cycling for a cure 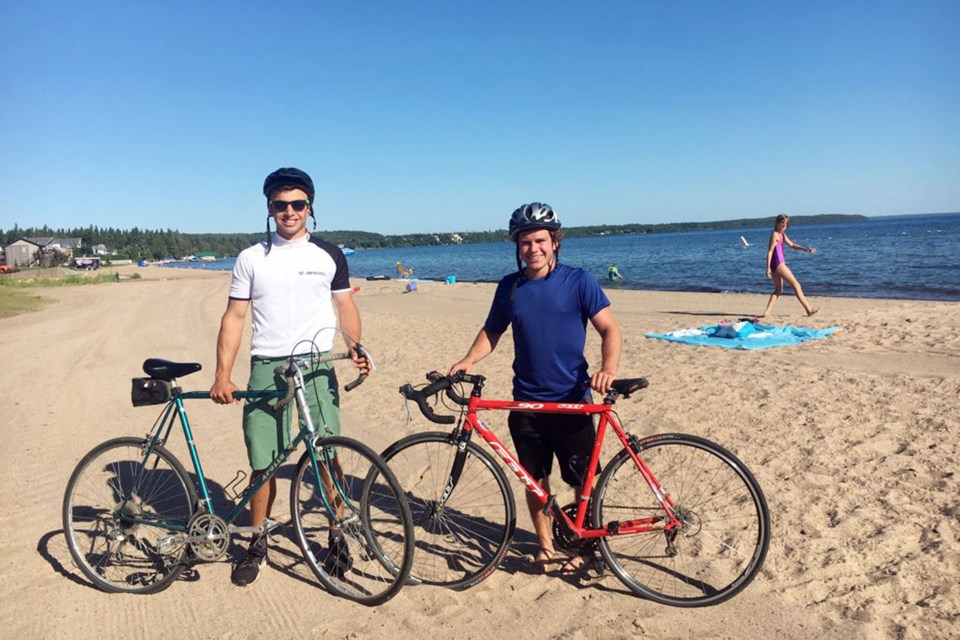 (left to right) Réjean Bourget and Daniel Bernier on Aug. 6 at the end of their 60-kilometre bike ride from Moose Lake to Cold Lake. Photo submitted.

BONNYVILLE – Putting 60-kilometres on their bicycles was a small sacrifice for two Bonnyville men who found their own way to support a cure for cancer.

After Réjean Bourget’s grandfather passed away from kidney cancer, he knew he wanted to give back in some way to honour his memory.

“It made me open up my eyes to realize how blessed and fortunate I am to have my health and even (my grandfather). He lived a really long life and it broke me at one point,” he told Lakeland This Week.

That’s why Bourget decided to launch Kilometres for the Cure, a 60-kilometre bike ride starting from his home in Moose Lake and ending at the beach in Cold Lake. All of the proceeds from the ride will be donated to the Canadian Cancer Society. As of Friday, Aug. 7, the fundraising page had raised over $6,100.

Bourget quickly found out he wouldn’t be biking alone. Longtime friend Daniel Bernier jumped at the chance to join him on the ride after hearing about the cause.

Bernier said he saw it as an amazing opportunity to help others.

“You never expect it to be you, and then all of a sudden somebody from your family can be affected just like that,” he noted. “When Réjean presented the opportunity, I was like ‘wow, this is great. I definitely want to be a part of this. It’s a great cause to give back to people who need it.’ I definitely wanted to take part in it.”

Bourget said when he started the campaign, his goal was to raise around $2,000.

“We didn’t know how many supporters we would have because it’s tough times with COVID-19 and everything. So people might be affected with job loss,” he explained.

The end goal quickly changed after they managed to raise roughly $1,600 in less than 24 hours, and the amount they were aiming for was quickly bumped up.

“It just shows that we have a lot of friends and family that are willing to support us,” Bourget expressed. “A lot of people from town and a lot of businesses even. We just can’t say enough thanks.”

The pair began training for the 60-kilometre ride by biking together at different intervals, building up their endurance as time went on.

Bourget and Bernier weren’t the only ones hopping on their bikes on Aug. 6.

Bonnyville-native Isaac Fagnan and his girlfriend, Patti-Anne Tracy, participated in Antigonish, NS. Adrian Kinney also rode in support of Kilometres for a Cure in Bristol, NB.

When Bourget was fundraising, all three didn't hesitate to donate and be part of the ride.

“They just showed me how awesome people can be and how it has had an effect on a lot of us, how people are willing to support, even in tough times like this because COVID-19 has been very hard on people economic-wise,” he expressed.

The morning of Aug. 6, Bernier and Bourget woke up early to beat the heat. They started at the end of their driveways along Moose Lake and made a pit stop at the La Corey gas station along the way. Once they arrived in Cold Lake, they stopped at the beach for a breather and to look back on what they had accomplished.

Bourget already had plans of continuing his fundraising efforts in the future.

“I’m just feeling excited about the ride next year and happiness for the continuous support from lots of local friends and family.”

Anyone interested in supporting Kilometres for the Cure can reach out to Bourget by phone at 587-990-7323 or email rejeanbou@gmail.com.