The MD of Bonnyville will be addressing 12 drainage issues throughout the municipality in the coming year
Feb 15, 2021 8:30 AM By: Robynne Henry 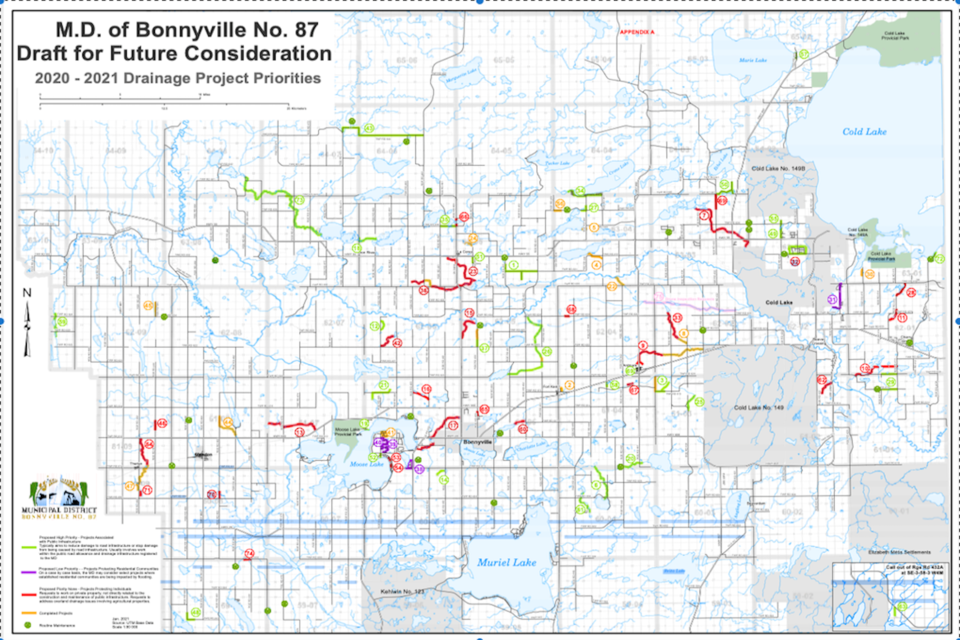 BONNYVILLE – The upcoming year will see the MD of Bonnyville trying to stay afloat as the municipality tackles some drainage problems.

The MD will focus on completing 12 projects that will address issues when it comes to flooding after the 2021 operational drainage priorities were approved by council. Abid Malik, general manager of infrastructure services for the municipality, presented the list during council’s Feb. 10 meeting.

“Council approved a drainage priorities map on Jan. 20 and directed administration to come back with a prioritized list of projects that can be delivered in 2021 and later on but we’re here for 2021,” Malik explained.

There are three tiers given to drainage issues throughout the MD.

The first priority was given to public infrastructure where it was creating drainage and flooding issues or causing damage to the municipality’s infrastructure. The 12 that were presented to council were the ones that could be completed within the year.

The second priority will be looking into communities that are being impacted and will be dealt with by the MD on a case-by-case basis. The final one is related to single, private dwellings and will be looked into further down the road.

Reeve Greg Sawchuk wondered if all of the listed projects could be completed before the end of the year as 11 required approval from the province before work could begin.

“We have a number (of projects) that are waiting for Alberta Environment approval. Do we see any issue with those approvals or do we need to reach out to them to see if we can speed some of these things up?”

Malik responded, “So far, we haven’t started with most of these because we were waiting for council approval. Now that we have the approval, we’ll get started simultaneously but Alberta Environment has been cooperative, mostly.”

As most of the approvals could be given within the next six months, Malik stated, work could begin in the fall and they will still be completed before the end of 2021.

While these are the priorities, CAO Luc Mercier explained other projects that become dire could jump to the front of the list if needed.

“Some of those standard issues that come forward in any given year, plugged culverts, sometimes we’ve got some small drainage issues, they will be dealt with over and above these. These are more so for the bigger projects that we’re maybe trying to jump the queue on the larger plan and priority for the drainage because Abid needs to get his planning done for 2021.”