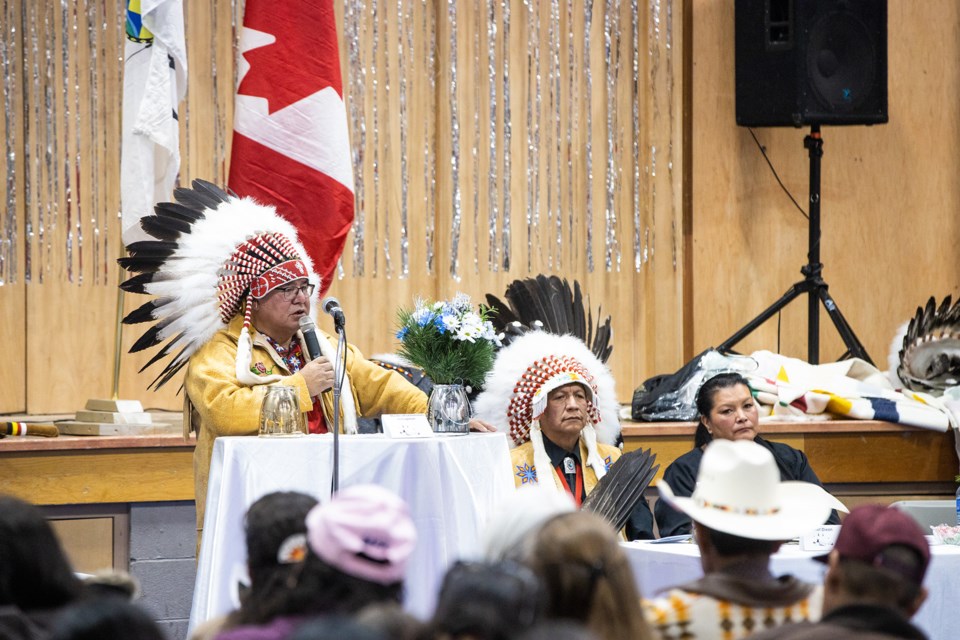 Bearspaw First Nation councillor Rex Daniels, here speaking at an inauguration ceremony, said he was saddened but not shocked to hear the news of 215 unmarked graves for residential school students in Kamloops being discovered. (Brent Calver/Western Wheel)

A councillor representing Eden Valley is saddened by the news of 215 unmarked graves of students being discovered at a former residential school in Kamloops, but not shocked.

“I am sad, we all are,” said Rex Daniels, a councillor with Bearspaw First Nation, who represents Eden Valley. “A lot of those residential schools, people forget those things happened there. The children who were found, I am sure there are a lot more to be found in Canada.

“These students’ parents, they never attended their child’s funeral. I was thinking of that – the parents of these children never had a choice, they were forced to send their children there.”

The Kamloops residential school operated from 1890  to 1978 and was at one time the largest one in the Indian Affairs residential school system, stated the National Centre for Truth and Reconciliation website. On May 28, 215 unmarked graves for students were found near the school site. Memorials were set up across Canada last week, including at the Okotoks Municipal Centre. Flags have been flown at half-mast for 215 hours – one hour for each of the unknown students.

Daniels, 63, attended the non-residential school at Eden Valley while growing up, and said he knows of several people, including those in his own family, who were sent to residential schools.

“I think the kids of parents who went to residential school are having more problems with opiates, for example,” Daniels said. “They (residential school students) had it hard, they turned to alcohol or something to help them forget sometimes.”

“The majority of the residential schools were Catholic and I think they need to apologize,” Daniels said.

(Pope Francis addressed the discovery of the Kamloops students’ graves on June 6, stressing reconciliation and co-operation from the church. There was no apology.)

Daniels applauded former prime minister Stephen Harper for issuing an apology on behalf of the government in 2008.

He said the tragedy discovered in Kamloops will provide an opportunity to educate non-indigenous people – particularly the youth.

“I know there are a lot of non-first nations people who don’t understand us,” Daniels said. “I think it is an opportunity to learn that there was a lot of pain and grief.”

Leah Sampson  — Standing White Buffalo —  a founding member of the Okotoks Indigenous Council, said the discovery of the graves and the treatment of students at residential schools was not a surprise to indigenous people.

She said the legacy from residential schools continues.

“There are more children in foster care than there ever were at the peak of the residential schools,” said Sampson, who is from the Muscowpetung Saulteaux Nation, in south Saskatchewan. “That is the legacy of residential schools that we are dealing with… It is more likely that Indigenous families will lose their children to foster care and that cultural genocide continues.

“It’s not like when they changed the residential schools that the problem was solved.”

Her grandmother went to the LeBret Residential school in Saskatchewan.

Sampson was born in High River and raised in Okotoks and is a 1991 graduate of Foothills Composite High School.

She said she did experience racism while growing up.

“I never fit in, I found that I was accepted if I pretended to be white, but the moment people found out who I was and that I came from an indigenous family, the racism was present,” she said. “Even today, I am ridiculed for practising my indigenous culture – by adults. That baffles me.”