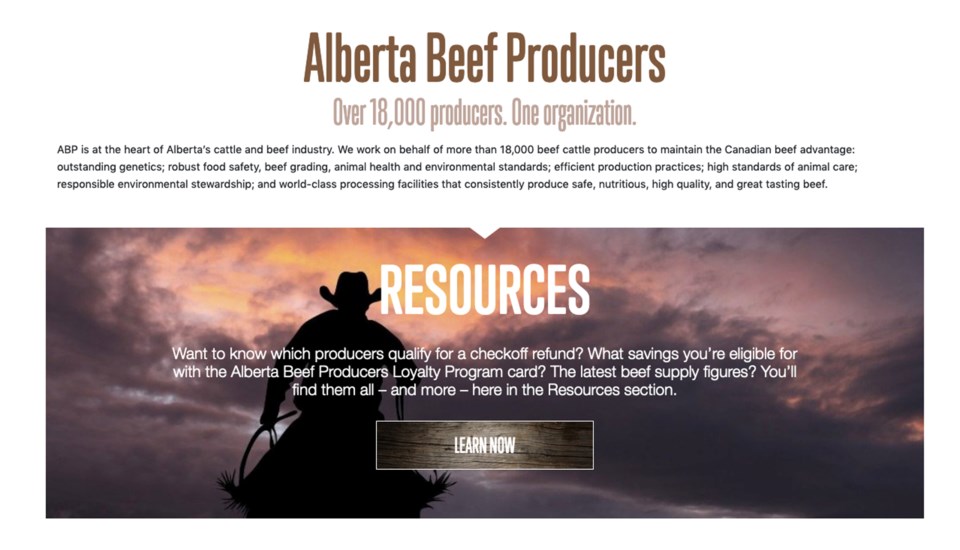 WESTLOCK - After 50 years as an organization, first as the Alberta Cattle Commission and now as Alberta Beef Producers, ABP is undergoing some major changes to become leaner and more efficient.

One of the major changes sees the reduction of the number of zones from nine to five, while the number of directors and delegates is dropping from 54 to 35.

ABP chair Kelly Smith-Fraser of Pine Lake, elected by ABP directors at their AGM in Calgary in December 2019, and Brad Dubeau, ABP’s new general manager, who assumed his new role this past summer following the retirement of long-time executive director Rich Smith, collaborated in providing the following update on the organization and its activities going forward.

“As we head into the new year we are looking forward to implementing new initiatives that have been in development through the latter half of 2020. We are finalizing details for the launch of a new ABP magazine, with the first issue due out in February, and an online platform/smartphone app. The new platform will have real time market information, industry related stories and the ability for a producer to pick preferences based on their interests. Through the app, notifications can be sent to producers, making them aware of situations that could affect the beef industry in Alberta,” said the pair via e-mail.

The ABP magazine will be published four times a year and provide updates on the happenings at ABP in each department, such as research, policy, government relations, marketing and education. It will also include information on the national organizations representing Alberta beef producers and other provincial cattle organizations, along with industry-related, human interest stories. As this plan comes to fruition, they will scale back their Cattle Country radio program and wind down the current format of Grass Routes. These new tools aim to connect with producers in a way that will let them guide the type of content they want to receive from our organization.

The 2020 ABP producer meetings took place online at the end of the year with a producer town hall and two resolution meetings, where they saw strong attendance and participation from Alberta producers. The town hall provided an overview of the work done this year by ABP and the national organizations, and 23 resolutions were passed for ABP to consider.

Delegate elections in two of the five zones were held electronically or by mail-in ballot and the results were announced at the beginning of January. Seven delegates in each of the five newly established zones (northwest, northeast, central, southwest and southeast) were elected lowering the delegate body from 54 to 35. Four of the delegates in each zone will serve two-year terms, while three will serve one-year terms to establish staggered future elections.

Board of directors elections will take place at the annual general meeting in March 2021 with all 12 directors elected at large by the new delegate body, under the stipulation that there must be at least one director from each zone. Again, six of the new directors will be elected to two-year terms, while six will serve one-year terms to establish staggered director elections in the future.

Like the rest of the world, COVID-19 dominated the organization’s thoughts and actions in 2020 and will continue to do so in 2021.

“ABP has worked closely with the Canadian Cattlemen’s Association and other industry groups to address the impacts of COVID-19 on the cattle and beef industry. We collaborated with the Alberta Cattle Feeders’ Association (ACFA) in extensive discussions with the Government of Alberta to ensure they understood the needs and priorities of Alberta producers. When the time came, the provincial government was quick to match the federal commitment to AgriRecovery funding for a set-aside program. The Alberta Fed Cattle Set-Aside program took final bids the week of Jan. 18, 2021.”

Seeing a gap in the support available for producers, ABP and ACFA submitted a joint proposal for the provincial government to provide immediate financial assistance to cow-calf and backgrounding producers facing extremely uncertain markets in the fall.

“We proposed funding be provided to reduce the premiums on cow-calf and feeder policies under the Western Livestock Price Insurance Program, as the Government of Saskatchewan had announced. We also asked the Alberta government to support the growing federal and provincial initiative to eliminate the Reference Margin Limit on AgriStability.”

Recently, ABP joined other provincial agriculture commodity groups in submitting a letter to the Alberta Agriculture and Forestry minister further encouraging government support of the proposed changes to the AgriStability program, which again included removal of the Reference Margin Limit and an increase to the compensation rate.

“We hope to see the provincial government support these changes in the short-term while work continues on the modernization of the business risk management suite.”