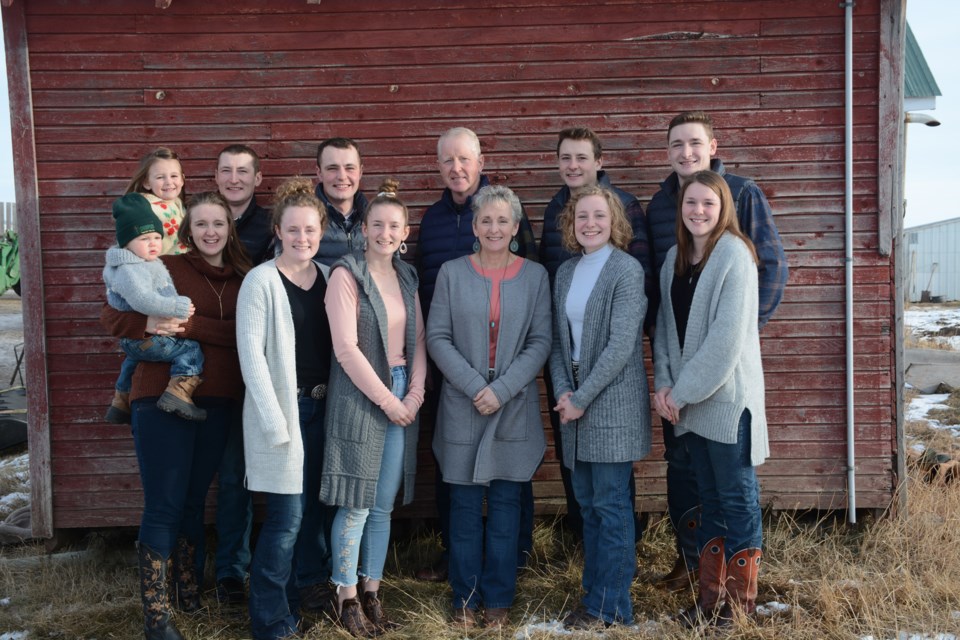 WESTLOCK - Pemlock Simmentals, owned by Scott and Wendy Letts, is a farm steeped in history where now their two grandchildren (with a third coming in April), will be the sixth generation to work the land.

Their home farm is located northwest of Westlock by the Pembina River, just east across the road from Bethel Bible Camp.

Scott notes, “My loving grandparents, Nelson and Agnes Letts, gifted their home quarter, through my dad, Park, and we settled here after we were married in 1990.”  They renovated the house where they have raised their eight children and there are still a few of the outbuildings standing, but the barn and the Lett’s store (1906) were taken down in 2004.

Both Scott and Wendy were raised on farms in the Westlock area, were high school sweethearts and as she observes, “We got to stay in the Westlock area and raise our family along the Pembina River which holds so many fond memories. We are truly thankful that we got to remain hometown kids.”  Scott joked that he didn’t get far, settling just 3.5 miles from his parents, Park and Beth Letts, at what was once called the Riverdale District.

Scott’s great-grandfather, George Harry Letts, left Quebec to come west, and settled on the quarter north of Scott and Wendy’s place. In 1904, his brother Thomas settled where they live today along the Pembina River. Thomas Letts asked Scott’s grandparents to move in with him, then got the homesteading urge again and moved southwest to Rochfort Bridge.

Ironically, both Scott and Wendy’s grandfathers' first name was Nelson, and the Letts and Brown families both raised purebred Hereford cattle.  Park and Beth Letts imported fullblood Fleckvieh (Simmental) cattle from Germany and Austria in the early 1970s and Fleckvieh have been a large part of their herds since.

Scott started his farming career early in life on his parents farm north west of Westlock.  At a tender age he fondly remembers driving silage truck at home, barely being able to see over the steering wheel.

“I ran the clutch and shifted gears while my brother Paul pushed the gas pedal.”

After graduation, Scott spent two years at Briercrest Bible College and went on to get his Bachelor of Science degree in agriculture while Wendy graduated from nursing at the University of Alberta. 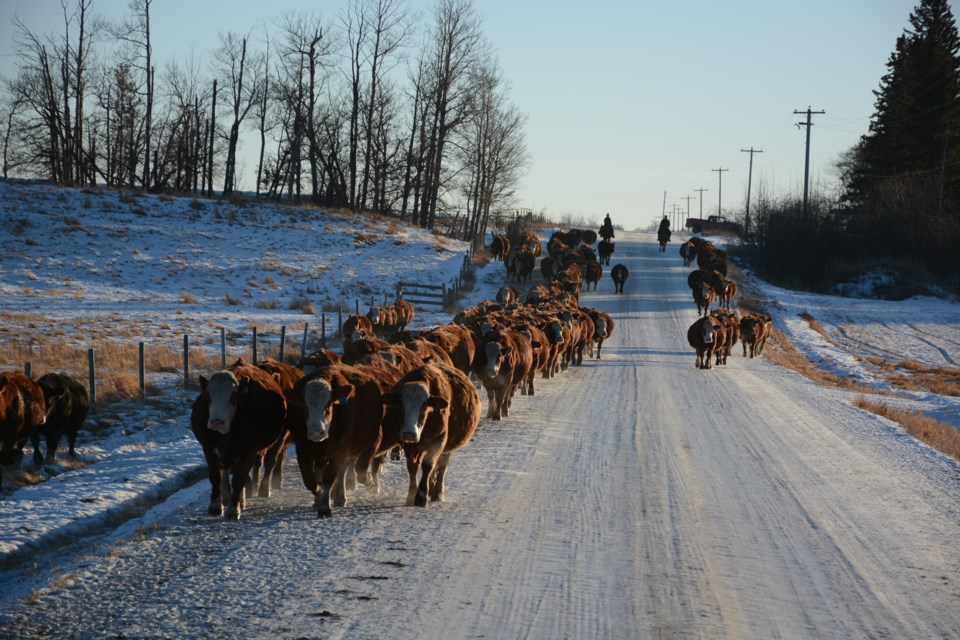 Family members herding a group of bred cows from a pasture south of the main farm and the calving area at the beginning of January.

On Wendy’s side of the family tree, George Brown left Bruce County in Ontario and came west with his family and managed the demonstration farm for the Alberta Government in Medicine Hat from 1912 to 1914. Then they moved to Sedgwick to manage the same project there. His son Nelson, Wendy’s grandfather, had the job there as dairyman. The family moved to north Edmonton to farm and Nelson Brown settled in the Springfield District southeast of Westlock in 1922. Her father Gordon eventually realized his dream of dairy farming, but had to sell it in 1979 because his shoulders were worn out. He continued to farm across the highway just southwest of the Westlock Golf Course until a farming accident in 1983 left him a quadriplegic and they moved to Westlock in 1990.  The farming industry has had its shares of ups and downs and it is no different for the Letts, but they cannot think of a better lifestyle and area to raise their family.

Scott and Wendy’s children — all four sons and four daughters — have helped out with the farm over the years and the ones who are working towards another career continue to help out whenever they are at home. They are very proud of their family, and very appreciative of their assistance and support. “Katelyn holds the record, I believe,” says Wendy. “She was four days old and in the tractor already. Yes, they all were a part of the farm — car seats in tractors, on the back of a quad, jolly jumper in the barn, in the backpack on Scott’s back on horseback. They all learned to drive and to ride horses at an early age.”

Graham, their married son, and his wife Emily are farming with Scott and Wendy. They are expecting their third child in April. Their eldest, Clara, at four, is already helping nana in the barn processing the new calves and adores her uncles and aunts. She loves being out with one or the other of them around the cows, and they have already predicted she will be the next herd boss! Both her and her little brother Colton, just two, have ponies and are already riding. After Bible College, Graham became a journeyman welder. As a married student, he graduated from Lakeland College as a crop technologist.  He operates a custom-spraying business, works for Neil Letts, and is also involved with several organizations, sitting on the board of directors at Gateway Research Organization and Bethel Bible Camp. On top of an already busy life, he still is involved working with the cattle, especially during fall and winter and at this busy calving time. An entrepreneur like both of his grandfathers, there is never a dull moment with Graham!

All of their college-age children attended at least one year of Bible College at Millar College of the Bible in Pambrun, Sask. Katelyn took a four-year degree program there, then worked one year as a teacher aide at Sunniebend Colony, and is now in her last year of the Grant MacEwan nursing program, along with her sister Mariah.  Spencer took a diploma program at Millar, graduated from Lakeland College in Vermilion (which both his grandfathers attended) taking animal science. He is now taking a COVID year off, but hoping to return to the University of Saskatchewan in the fall to complete his animal science course. Mariah completed a diploma program at Millar and is in her last year of the Grant MacEwan nursing program. Bryan completed a diploma program at Millar. He has taken time off to decide on his career pathway. In the meantime, he is working at Jackson Farms and at home, calving cows with the family.  Park Jr. took one year at Millar and is working for a year for a grain farmer at Swift Current, Sask. He is currently at home helping calve cows.  Rebecca is in Grade 11 and hopes eventually to travel to New Zealand to get her chiropractor licence.  Dorothy is in Grade 9 and not yet ready to consider her future plans.

Pemlock Simmentals has a commercial herd consisting of Fleckvieh/Angus cross cows and a smaller herd of fullblood and purebred Simmentals. To keep life interesting, they also calve out a few Black Angus cows in May, crossing them with Fleckvieh.

Scott and Wendy note, “All our boys would like to farm in various capacities. Just how that will pencil out is still in the making, but they are certainly capable, and love the various facets of our farm and ranch.”

Wendy adds: “The Lord has blessed us, and by His grace, we have been gifted with a family and an Alberta farm. We are grateful for the faithful, dedicated, and hard-working generations that preceded us and imparted their wisdom. Their kindness and selfless generosity has allowed us the opportunity to farm. We have also been gifted with the generation that follows us; children that are talented, but more importantly, dedicated and humble; serving their family, friends, church and community. A favorite verse of ours is Psalm 90:17 – And let the beauty of the Lord our God be upon us, And establish the work of our hands for us; Yes, establish the work of our hands.”