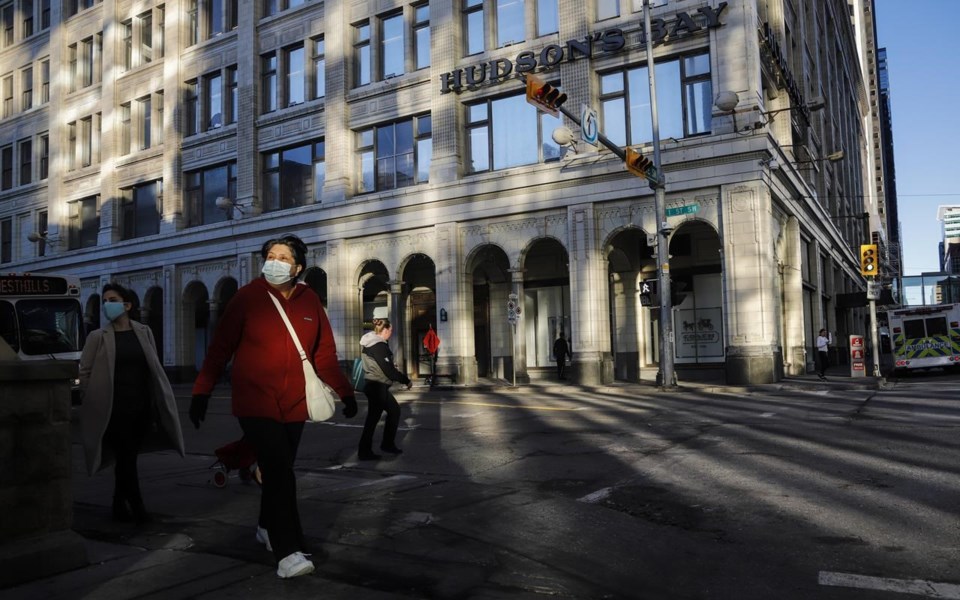 A woman wears a mask in downtown Calgary, Alta., Friday, Oct. 30, 2020, amid a worldwide COVID-19 pandemic. Alberta expects to receive 680,000 doses of COVID-19 vaccine early in the new year, but there are still hurdles and unknowns, according to the province's chief medical officer of health. THE CANADIAN PRESS/Jeff McIntosh

EDMONTON — Alberta expects to receive 680,000 doses of COVID-19 vaccine early in the new year, but there are still hurdles and unknowns, says the province's chief medical health officer.

“These (vaccine) numbers, of course, depend on many factors,” Dr. Deena Hinshaw told reporters Wednesday.

“They depend on the final pieces of the trials that are underway going well. They depend on ensuring that the safety and the effectiveness of the early vaccines can be assured.

“All of those checks and balances must be cleared.”

In recent days, both Pfizer and Moderna have said their vaccines are about 95 per cent effective in trials. They still must undergo regulatory review and approval.

The doses would be distributed on a per-capita basis. Ontario Health Minster Christine Elliott said her province expects to get 1.6 million combined doses between January and March.

The province reported 730 new infections Wednesday, with 287 people in hospital and 57 of them in intensive care. There were 11 new deaths, bringing that total to 443. There are 10,057 total active cases.

Hinshaw said the strain on contact tracing continues, with about 40 per cent of cases linked to a household or social gathering or private events.

“For 30 per cent (of cases), the source remains unknown,” she said.

There is a 15-person limit on public gatherings and informal events in high-risk areas, which include urban centres and communities surrounding Edmonton and Calgary.

Bars, pubs and restaurants that serve liquor must stop serving by 10 p.m. and close an hour after that to prevent those establishments from becoming late night super-spreader party zones.

The province is to review the success of those measures on Nov. 27, but Hinshaw said she is distressed to hear stories of some fitness groups and sports teams trying to circumvent the rules.

“I have seen examples of fitness studios running group classes with a video rather than with an instructor,” she said.

“Some team sport practices have continued by moving to a neighbouring community’s rink and some teams continue to socialize together simply because they’re in a cohort as a team.

“This is deadly serious.”

Notley said 91 of 142 regions with troubling caseloads have a patchwork of rules on mask wearing, and a broad order is needed to better keep vulnerable people safe.

“Stats show that a higher number of Albertans aged 60 years or more — those who are most vulnerable — live in rural and smaller communities.

“Why won’t you help those people and make masks mandatory in those hot-spot communities?”

Shandro did not commit to a mask ban and accused the NDP of spreading misinformation and undermining support for provincial pandemic efforts.

“We’re making decisions here in Alberta based on data and the advice of the chief medical officer of health. That’s what Albertans want. Not polls and gutter politics,” he said.

This report by The Canadian Press was first published Nov. 18, 2020.

New COVID-19 measures expected this afternoon
Nov 24, 2020 10:35 AM
Comments
We welcome your feedback and encourage you to share your thoughts. We ask that you be respectful of others and their points of view, refrain from personal attacks and stay on topic. To learn about our commenting policies and how we moderate, please read our Community Guidelines.