Legion, other veterans groups to get $20M to weather COVID-19 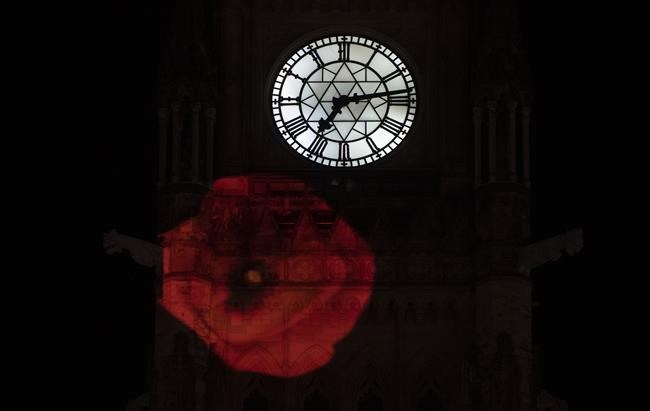 A poppy is projected on the side of the Peace Tower in Ottawa, Monday, Nov. 9, 2020. On the eve of Remembrance Day, the federal Liberal government is moving ahead with plans to provide emergency assistance to veterans organizations that have been battered by the COVID-19 pandemic. THE CANADIAN PRESS/Adrian Wyld

OTTAWA — On the eve of Remembrance Day, the Trudeau government tossed a bone to the Royal Canadian Legion and other veterans' groups battered by the COVID-19 pandemic, promising millions in emergency funding to help them keep their doors open.

Yet the promised funds fall short of what groups had requested, and the government offered no new plans for eliminating the barriers and long waits that thousands of disabled veterans have been facing in trying to access federal benefits and services.

Officials also confirmed that none of the funding will go to the Juno Beach Centre, the museum built on the beach in France where Canadian soldiers went ashore on D-Day, and which has been facing its own pandemic-related financial crunch.

Prime Minister Justin Trudeau took it upon himself on Tuesday to announce that the government would be providing $20 million in aid to the legion and other veterans’ groups whose finances have dried up due to the pandemic.

"Our veterans served Canada with honour and valour," Trudeau said during one of the federal government’s regular updates on the COVID-19 pandemic in Canada. "They stepped up for us and now we must step up for them."

The legion, which says it has been forced to close dozens of branches across the country, some permanently, will get $14 million while the rest will be split among VETS Canada, True Patriot Love and other organizations that work with veterans.

Such groups regularly provide assistance to veterans in need, including food, accommodation and emergency funds. They also help former military members through the often-complicated process of applying for federal assistance.

"Too many of the legions that provide support for them are facing tough times themselves," Trudeau said while encouraging Canadians to remember those who gave their lives for the country and its values and principles on Remembrance Day.

The $20 million was set aside in the government’s COVID-19 relief bill passed by Parliament last month after veterans organizations had spent the previous few months pleading for assistance.

Legion dominion president Tom Irvine welcomed the new funding as a long time coming, telling The Canadian Press that the organization was extremely grateful as the money will help save dozens of branches on the verge of closing.

Yet as welcome as the funding is, Irvine acknowledged it falls short of the $30 million the legion requested.

"My first letter to the prime minister was in April," Irvine said. "Maybe it might have saved some of those 20 branches."

Neither Trudeau nor Veterans Affairs Minister Lawrence MacAulay offered any new promises to the more than 40,000 veterans who have been waiting months or years for the government to process their claims for disability benefits.

While MacAulay announced in June that Ottawa was hiring 400 more staff to deal with the backlog, some veterans groups have been calling for the government to automatically approve applications, with spot audits to prevent cheating.

Asked Tuesday when the backlog would be eliminated, MacAulay said the department’s aim is to have made a sizable dent by 2022.

Trudeau defended the government’s record when it comes to veterans, even though advocates and past veterans’ ombudsmen have said the long wait times are contributing to the stress and financial uncertainty of thousands of former service members.

"We know there's always more to do," Trudeau said. "But we will continue to stand by our veterans this week, and all weeks, as we recognize their service."

Trudeau and MacAulay also did not address growing concerns that veterans are facing barriers in applying for federal assistance because they can’t get the necessary medical reports and other required information due to the pandemic.

Those barriers have been blamed for the fact only 8,000 applications were made by veterans between April and June, which is about half the three-month average over the past few years.

MacAulay made no mention of those barriers to applying as he noted that Veterans Affairs had for the first time in years made progress in reducing the backlog.

While the legion and other veterans’ organizations will be able to start accessing the emergency funds in the coming days, Veterans Affairs confirmed that talks about assistance for the Juno Beach Centre are ongoing.

Opened in 2003 and operated as a non-profit, the centre was facing financial difficulty last year before what operations manager Alex Fitzgerald-Black described as a reorganization to minimize costs while aiming to attract 90,000 visitors this year.

Those plans were upended by COVID-19, with only 30,000 visitors now expected. The pandemic cancelled commemorations for the 75th anniversary of the end of the Second World War and forced the centre to shutter for most of the year.

"Assistance received through French and Canadian subsidies have helped limit the pandemic’s financial impact on us in 2020," Fitzgerald-Black said in an email.

"We have access to a French government loan in case of emergency and are working with Veterans Affairs Canada on a request for support. The uncertainty around 2021 and what visitor numbers we should expect due to the pandemic are growing concerns."