The federal government has signed a deal with Medicago to secure the rights to buy 76 million doses of its vaccine
Nov 10, 2020 4:40 PM By: Canadian Press 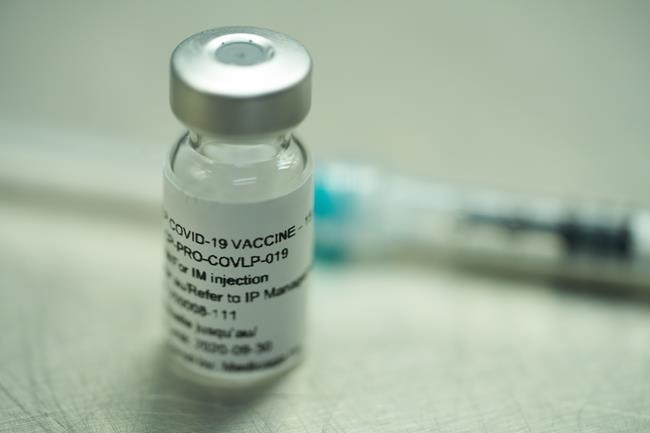 A vial of a plant-derived COVID-19 vaccine candidate, developed by Medicago, is shown in Quebec City on Monday, July 13, 2020 as part of the company’s Phase 1 clinical trials in this handout photo. Medicago says it has received promising early test results for its plant-derived vaccine for COVID-19. THE CANADIAN PRESS/HO, Medicago

QUEBEC — A Canadian biopharmaceutical company says it has received promising early test results for its plant-derived vaccine for COVID-19.

Privately held Medicago says interim results of a Phase 1 clinical trial found that 100 per cent of subjects developed an antibody response after two doses of its COVID-19 vaccine candidate.

“These are very promising results," said Nathalie Landry, Medicago's executive vice-president of scientific and medical affairs in a news release.

"We also observed that the antibody levels were higher after vaccination than those observed in convalescent sera from people who recovered from the disease.”

The Quebec City-based company says the side-effects were generally mild to moderate and short in duration.

The Phase 1 clinical trial was a randomized, partially blinded study of 180 healthy people.

Based on the Phase 1 data, Medicago plans to proceed with a Phase 2/3 clinical trial for its COVID-19 vaccine candidate, subject to regulatory approval.

The news comes a day after stock markets worldwide rallied on a report from Pfizer that a potential COVID-19 vaccine it's developing with German partner BioNTech may be 90 per cent effective, based on early but incomplete test results.

““The positive results of our Phase 1 clinical trial are a step forward in the fight against the COVID-19 pandemic and we are confidently moving forward to our Phase 2/3 trial. We’re pleased that Medicago’s innovative manufacturing technology is helping to diversify the classes of COVID-19 vaccines candidates in development,” said CEO Dr. Bruce Clark.

The federal government has signed a deal with Medicago to secure the rights to buy 76 million doses of its vaccine.

Medicago will also receive $173 million in funding from Ottawa for its vaccine research and development and for the construction of its Quebec City manufacturing facility.

Ottawa is also investing $18.2 million in a potential vaccine from British Columbia's Precision NanoSystems and the National Research Council is to spend $23 million to support other Canadian vaccine initiatives.

Medicago was founded in 1999 and says its team includes over 450 scientific experts and employees in Canada and the United States, with academic affiliations in Europe and South Africa.

Note to readers: This is a corrected story. An earlier version described the federal government funding incorrectly.