The results mirror findings from earlier on in the pandemic when women reported feeling more worried than men about COVID-19 as they began taking on added care duties for children and aging parents.
Jan 13, 2021 2:15 PM By: Canadian Press 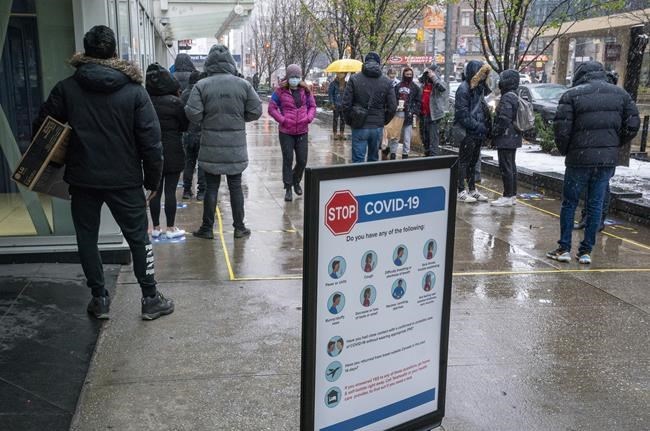 Crowds of people line up outside an electronics store in Toronto on Sunday November 22, 2020. New polling from Leger and the Association of Canadian Studies suggests some Canadians feel their mental health has declined as the pandemic has rolled on, with the impacts potentially striking women and visible minorities more than others. THE CANADIAN PRESS/Frank Gunn

OTTAWA — Aisha Addo was having a talk just the other day with a close friend about how they were faring as the pandemic stretched into 2021.

She said her friend spoke candidly about feeling like she was falling into a state of depression and being unable to pull herself out of it.

"We're all experiencing the same things — some people more intensely than others," said Addo, who founded the non-profit Power To Girls Foundation.

New polling from Leger and the Association for Canadian Studies suggests some Canadians feel their mental health has declined as the pandemic has rolled on, with the impacts potentially striking women, single parents, the unemployed, relatively recent immigrants and racialized people more than others.

The survey shows female respondents were more likely than men to report their mental health as bad or very bad across a range of age groups, but especially between the ages of 18 and 34 years old.

Rates of worsening mental health were also high for single parents in the survey, with 40 per cent describing their mental health as bad or very bad.

Tanya Hayles, founder of the global group Black Moms Connection, said many parents are feeling stretched by having to work from home while overseeing virtual learning. She said a further burden for Black parents are issues of systemic racism.

"This pandemic has adversely affected women more than men and it's women who are leaving the workforce altogether to make sure that their children have what they need," she said.

"If you're a single parent, there are no breaks."

Jack Jedwab, president of the Association for Canadian Studies, said mental health might worsen with new lockdowns and restrictions as people lose the outlet of visiting friends and family. Some respondents in the survey said they did that over the holidays.

"It's a very significant challenge for governments that are introducing lockdowns and curfews to not see the mental health side of this crisis get exacerbated," Jedwab said.

The online survey was conducted Jan. 2-3 with 1,523 respondents. It can't be assigned a margin of error because web panels are not considered random samples of the population.

The results mirror findings from earlier on in the pandemic when women reported feeling more worried than men about COVID-19 as they began taking on added care duties for children and aging parents, and lost their jobs at a faster rate than men, said Andrea Gunraj, vice-president of public engagement at the Canadian Women's Foundation.

Another factor at play is the increased risk for gender-based violence that predominantly targets women, she said.

"This picture of increased violence, and increased stresses in caregiving and housework, that intersects with the economic stresses that women uniquely have been facing," Gunraj said.

"It tells a certain picture about women's mental health right now … and the pandemic being a gender-pandemic at large."

The polling analysis also looked at results for immigrants and some racialized communities, which came through reviewing six surveys by Leger involving over 9,000 respondents between Oct. 29, 2020, and Jan. 3, 2021. It too cannot be assigned a margin of error as a web-based survey.

The data suggests that 25 per cent of people who have lived in Canada for less than five years reported their mental health was bad or very bad, while 19 per cent of respondents who were born in Canada reported the same.

Even before the pandemic, there was a lack of mental health resources for minority communities, Addo said. Many relied on their community for mental health support, which has disappeared with public health requests to avoid visiting friends and family, she said.

Accessing other resources is also difficult for vulnerable populations, particularly those with children learning remotely and maybe only one computer at home, Addo said.

Addo suggested governments create a mental health fund or program to ensure people who need it have someone to speak with.

This report by The Canadian Press was first published Jan. 13, 2021.