An Indigenous couple passing through Airdrie were the targets of a racially-motivated attack Dec. 3.
Dec 9, 2020 1:15 PM By: Jordan Stricker 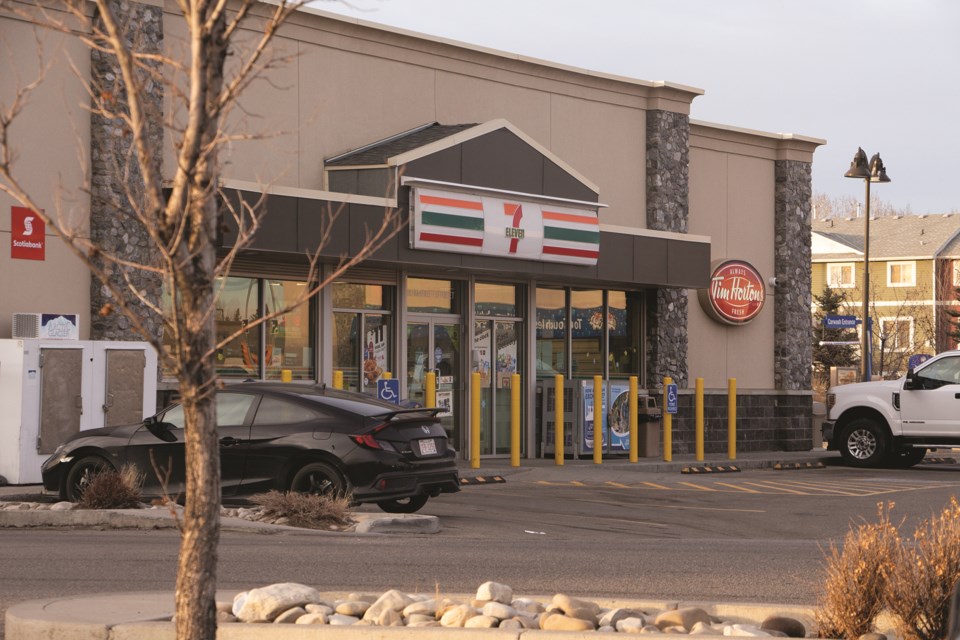 The 7-11 store where the Bear's stopped for a bathroom break in Airdrie that lead to a racially-charged assault on Dec. 3. Photo by Jordan Stricker/Airdrie City View

An Indigenous couple passing through Airdrie were the targets of a racially-motivated attack Dec. 3.

According to a report by the Calgary Herald, the attack occurred in the late evening, when Telly Bear and his wife Judy were driving home after attending a funeral in Saskatchewan.

Telly told the Calgary Herald the couple stopped at the 7-Eleven in Kingsview Market around 10:30 p.m. to use the washroom on the way back to Calgary. While there, Bear said a Caucasian man pulled up next to their truck and started yelling at his wife, using racial slurs and trying to intimidate the couple.

“Charges are being laid, racism is still here,” said Judy Bear in a Facebook post after the attack.

According to Judy's Facebook post, the man continued to chase the couple around the block, at which point Bear stopped his car to confront the man. She said the man rear-ended his stopped truck, exited and began hitting him on the head and back with a baton.

“We both went to the hospital,” she said in the post. “My neck and back are sore, but no major injuries. My husband was bleeding from [his] left cheekbone and his left forearm.”

A press release from Airdrie RCMP said members responded to a report of a motor vehicle collision and assault at approximately 10:50 p.m. that evening.

The release stated Airdrie resident Darrian Chief, 27, was arrested at the scene and has been charged with possession of a weapon for a dangerous purpose, dangerous operation of a motor vehicle and assault with a weapon. He has been released from custody on conditions and will be appearing in Airdrie Provincial Court Jan. 14, 2021.

“As the matter is now before the courts, no further updates will be provided,” the release said.

When reached Dec. 8, Bear said he and his wife are still suffering from the results of their injuries. He added the attack is another example of Indigenous Canadians facing discrimination.

“For the last 150 years, ever since cowboys and Indians, natives have been mistreated,” he said.

“It’s not just Indigenous people. It’s African Canadians, East Indians – anyone that deals with racism. We all have red blood. It doesn’t matter if you’re pink, blue, yellow or red. It affects everyone in a negative way.”

“Horrible incident being reported last week in Airdrie,” she said. “We must continue to denounce racism in all forms. It’s not enough to not be racist, we must be anti-racist.”

According to Bear, since the attack, he has been contacted by various Indigenous groups in the local region about the possibility of organizing a "healing walk" from Calgary to Airdrie to bring further awareness to the issue of racism.