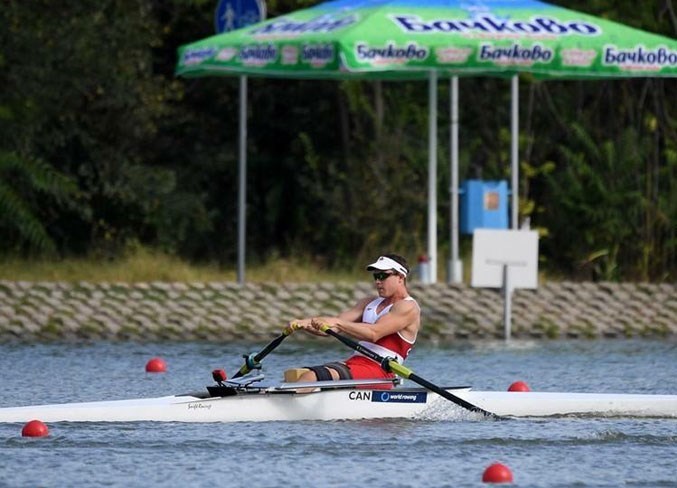 St. Paul para-athlete Jeremy Hall is training in Alberta these days, following the postponement of the 2020 Tokyo Paralympics.

Hall had found a female rowing partner last summer and was preparing to requalify for the upcoming games at a competition in Italy in May after the duo placed 11th at the 2019 World Rowing Championship qualification regatta for the Olympic Paralympic games. At the requalification regatta, which will now be held in 2021, Hall and his partner, Jessye Brockway, will fight for one of the two remaining in the PR2Mix category. PR2 athletes have trunk and arm movement but are unable to use their legs to propel the sliding seat.

Up until the new year, the athletes’ focus had been individual. And, before the start of the pandemic, things had been going exceptionally well on “an exponential development curve.”

“We were seeing progress every day, with every stroke, getting faster, and learning to work together and communicate,” Hall said.

The Paralympic Games, originally scheduled to start on Aug. 24, will now take place next year in the same time slot – between Aug. 24 and Sept. 5, 2021.

“My focus in the last few months has been for competing in the qualification regatta in May,” Hall said. “I’ve been practicing to get faster, fitter and making some technical changes.”

However, with the closure of the national training centre based in Victoria, B.C, Hall is now in Edmonton, training out of his brother’s basement with equipment provided by Rowing Canada, allowing athletes to train on their own.

“There’s mixed emotions. I was getting excited at the progress we were making on the boat,” Hall said. “But I think in terms of the pandemic, this is certainly bigger than sports and everyone has to do their part.”

Hall added he is proud of the stance and leadership role that Canada and the Canadian Olympic and Paralympic committee have taken, to come out and say that they wouldn’t send athletes if the games weren’t postponed.

“In regards to the postponement, there’s a silver lining and it’s a blessing in disguise,” he said, “Jessye and I were a little behind in the game and so now, the extra time also allows us to get even stronger for next year.”

Right now, Hall works part-time at Canadian Sport Institute (CSI) and hopes to begin a Ph.D. program in sports science, but with the new change, this will have to take the backseat for one more year.

“Beyond the games, I'm hoping to take on a more expanded role at CSI . . . both will now likely have to be pushed back another year,” Hall said. “I was excited and ready to compete this year and then shift my focus to different goals. It's a bit daunting to know that's another full year away.”

Brockway and Hall became rowing partners in July of last year, and Brockway is in her first year of rowing.

“The postponement to me means more time with Jeremy,” Brockway said. “But, it’s also very shocking and a bit of a loss for us because we’ve worked hard.”

Like Hall, Brockway and several other athletes expected to participate in the games are now at home, practicing on their own.

“Jeremy has really helped me push, coached me through a lot of stuff, which is great because I’m new,” Brockway said. “He’s been really patient and encouraging.”

She added she is looking forward to being able to go back to training as a team altogether.

“I’ve realized how valuable that is.”