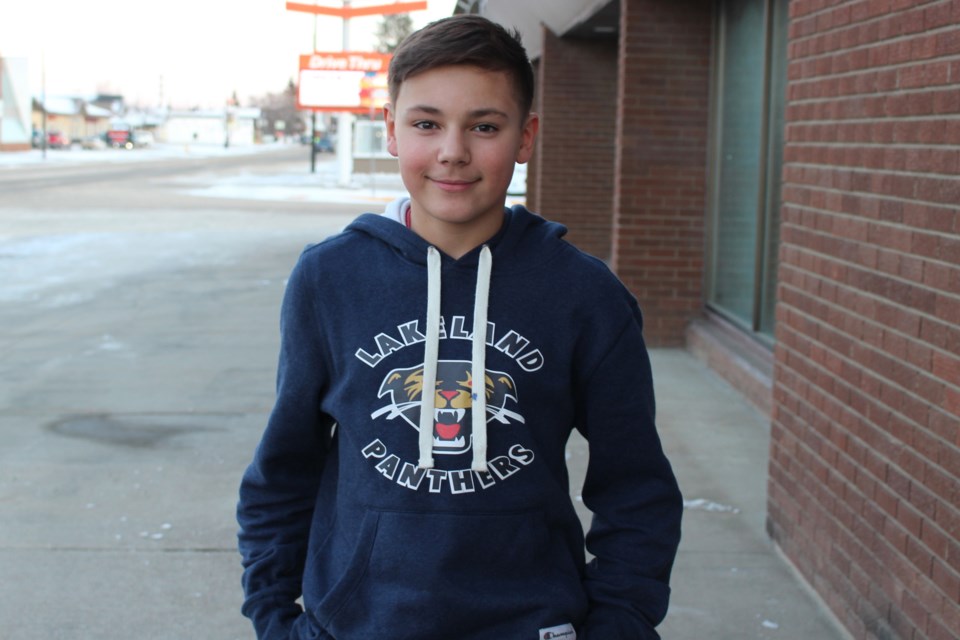 BONNYVILLE -  A pair of local hockey players are hitting the ice to represent their home towns on the provincial level.

Bonnyville-native Austin Wentz, 12, will be donning the Zone 7 jersey at the 2020 Alberta Winter Games taking place in Airdrie Feb. 14 to 17, while 14-year-old Lexi MacLeod from Cold Lake will be playing for Zone 5.

When Wentz headed to the tryouts on Dec. 6 in Vegreville, the centreman wasn’t sure what to expect.

“It was a great experience to meet new players and make new friends,” he recalled.

Since this was his first time trying out for a team of this caliber, Wentz wanted to use the opportunity to learn and improve his skills.

He was surprised to hear he had made the roster.

“There were a lot of skilled players there. There were people that could have made it, and I thought that my chances were pretty low.”

“(He) has a nose for the net, he shoots and skates well, and sees the ice well. As a coach, those are a lot of the things you’re looking for. Being able to know the game, and that offensive opportunity side is a huge check mark when it comes to trying to pick forwards for teams like this.”

Wentz feels his time with the Panthers gave him a competitive edge when he was trying out, and will help him down the road with his hockey dreams. His long-term goal is to one day make it to the NHL. Until then, he has his sights set a little closer to home.

“I want to play for the Bonnyville Jr. A Pontiacs. I just want to try and get scouted, maybe get a scholarship for university, and experience another thing,” he expressed.

MacLeod had some experience heading into tryouts in Leduc on Nov. 30. She played on the Alberta Challenge team last year, which is similar to the Winter Games.

The athlete was excited to get another shot at showing off her skills.

“I had good defence partners during the tryouts, so that helped so I could do better with them.”

MacLeod is always looking for opportunities to further her hockey career, and felt this was a chance she was able to take advantage of.

“I’ve always loved hockey, and this is just the next level that I can play,” she exclaimed.

The defenceman normally plays alongside her twin brother, Brett, on the bantam Cold Lake Ice boys’ team. The provincial teams she joins are usually the only time she plays alongside girls.

“It’s just more fun, and it was easier for my parents to have me and my brother on the same team. The hitting is really fun and it’s a lot more competitive,” she explained.

When it comes to her hockey career, MacLeod wants to make Team Alberta to represent her province and to continue playing alongside her brother.

The Alberta Winter Games will bring together youth from across the province to compete in sports, such as archery, futsal, curling, and volleyball.

Voyageur teams won't play in 2020-21 season
Aug 4, 2020 11:19 PM
Comments
We welcome your feedback and encourage you to share your thoughts. We ask that you be respectful of others and their points of view, refrain from personal attacks and stay on topic. To learn about our commenting policies and how we moderate, please read our Community Guidelines.