The Bonnyville Pontaics wrapped up their eight-game series with the Sherwood Park Crusaders over the weekend
Apr 6, 2021 5:00 PM By: Robynne Henry 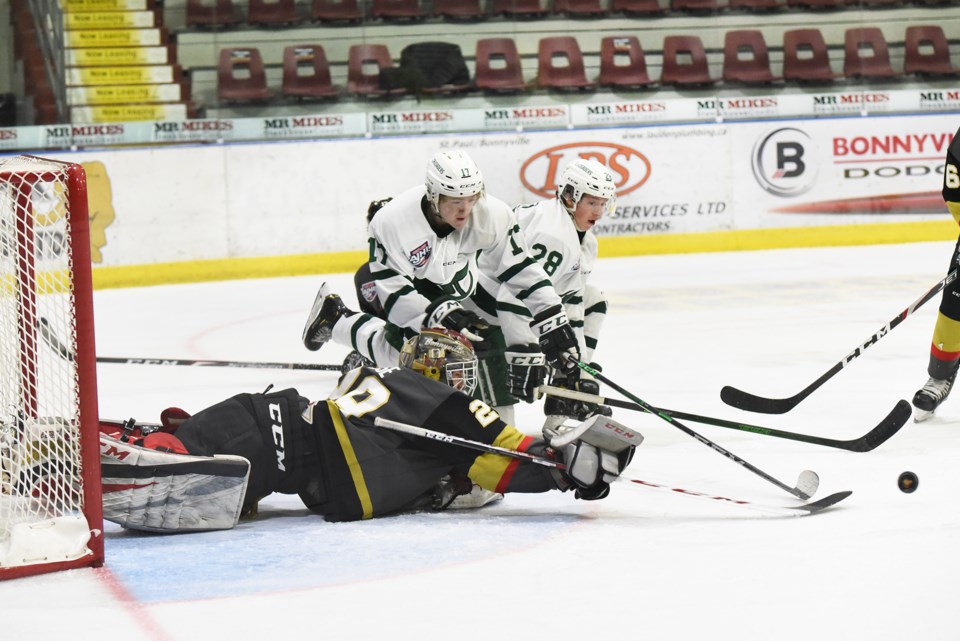 Goalie Easton Hesse pokes the puck away from the Sherwood Park Crusaders during their Saturday, April 3 match up. / Game Ready Photography photo.

BONNYVILLE - The Bonnyville Jr. A Pontiacs finished up an eight-game series against the Sherwood Park Crusaders over the weekend.

The three days of games ended 2-1 for Sherwood Park, with Bonnyville getting a win at the R.J. Lalonde Arena on Saturday.

“It was nine periods of hockey that had a real playoff atmosphere that was competitive for this time of the year with the amount of time that we’ve been together as any other year that we’ve played in the past,” explained Pontiac's head coach and general manager Rick Swan.

It was the Sherwood Park team that saw the most success in the match-ups, taking the series 6-2 overall.

The games were among the first since the Alberta Junior Hockey League (AJHL) was granted permission from the province to head back to the ice for games. Teams entered into cohorts for the beginning of the second half of the season and had to follow strict COVID-19 protocols. The Western Hockey League (WHL) was the only other league given permission to continue playing.

“It was great for us to get an opportunity to play and great for us as well utilizing a lot of our players and putting them into different situations,” said assistant coach TJ Millar. “Especially with our goalies, you saw all three of them got action inside those eight games. There’s a lot to build on and to learn but it was a great experience and we were fortunate to be able to play.”

Swan added, “We get this opportunity to be able to play games in a COVID-19 world and we’re grateful to be able to do that. Grateful that we’re involved where we are and the big piece of that is we’re really proud of the fact that our players come into our community and they’re doing what they’re supposed to be doing and they also recognize that it’s a privileged opportunity that they’re getting.”

As of Lakeland This Week’s press deadline, positive COVID-19 results had been identified in the Okotoks Oilers, Drayton Valley Thunder, Whitecourt Wolverines, and Grande Prairie Storm cohorts. All of the teams had to suspend their activities for 14-days as per the AJHL’s Return to Play protocols.

The Pontiacs didn’t start the weekend off on the right skate when they lost 4-3 to the Crusaders on April 2.

Sherwood Park got on the scoreboard early in the first, finding the back of Bonnyville’s net less than five minutes into the game.

Pontiac Jaden York wasn’t happy with that. He tied the game up at 1-1 shortly after.

The Crusaders took the lead again in the second, but Pontiac Sabastian Tamburro quickly answered with a goal of his own before the buzzer rang.

The third period followed suit of the earlier part of the game, with Sherwood Park getting a goal to take the lead that was answered by the Pontiacs. Ethan Sundar tied it up at 3-3 and forced the game into overtime.

The Pontiacs fought hard but couldn’t get another goal before the Crusaders, who skated away with the 4-3 win.

Victory in their barn

With the sting of the loss from the night before fresh on the Pontiacs' minds, they were determined to bounce back and that’s exactly what they did with their 3-2 success.

Tamburro added his name to the scoresheet first, giving Bonnyville a 1-0 lead in the first.

Less than five minutes into the second frame, Pontiac Alex Power added another point to the lead, which was cut in half when the Crusaders got the puck past Bonnyville’s goalie.

The home team wasn’t deterred by this, and Ethan Sundar added another point for good measure in the final frame. Although Sherwood Park added another goal to their score, it didn’t stop the Pontiacs from securing the 3-2 win.

The Pontiacs almost kept that momentum going Sunday evening when they lost 3-2 in a shootout.

The Crusaders started the evening off with the first point, which was the only one for the first frame.

Both teams came out of the locker room determined in the second, with the Crusaders adding a point to their lead before Pontiac Mason Mantzavrakos put Bonnyville on the scoreboard.

Before the period was through, Pontiac Ryan Koebel tied it up at 2-2.

The Pontiacs and Crusaders were evenly matched throughout the third, which forced the teams into a scoreless overtime and into a shootout.

Unfortunately for the Pontiacs, the Crusaders got the one goal they needed to solidify their 3-2 win.

With their first series behind them, the Pontiacs now turn their attention to their next opponents. According to Millar, the Pontiacs are going up against the Spruce Grove Saints and Whitecourt Wolverines.

“The schedule is just being finalized now and we have the... next two weeks to practice and prepare before we get going into this next cohort series," he stated.

When asked what they’ll be doing to get ready during that time, Swan said "non-stop teaching" is one of their priorities.

“We know that, as coaches, we have to physically and mentally prepare our guys to be better every day, and that’s what we pride ourselves on running a program that’s about striving for excellence. That’s coming to the rink a little bit better than we are today and it’s something that involves fitness training as well as on ice, as well as our video. Another important aspect of that is the mental part of the game."

The AJHL had not released the new schedule by Lakeland This Week’s press deadline.