Bonnyville Pontiacs look to fill their roster at main camp

The Bonnyville Jr. A Pontiacs were on the hunt for players during their main camp
Sep 2, 2020 10:30 AM By: Robynne Henry 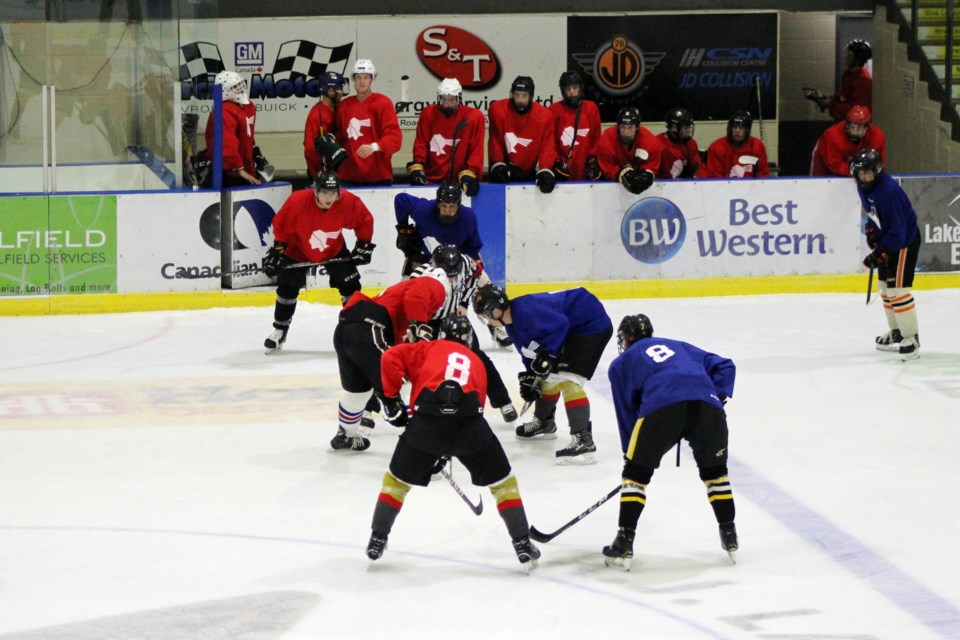 Members of team red and blue get ready for a puck drop on Saturday, Aug. 29 during the Bonnyville Jr. A Pontiacs main camp at the R.J. Lalonde Arena. Photo by Robynne Henry.

BONNYVILLE – Becoming a Jr. A Pontiac was the goal for athletes that came to Bonnyville over the weekend.

The R.J. Lalonde Arena saw just under 50 hockey players hit the ice from Friday, Aug. 28 to Tuesday, Sept. 1, each skating for the opportunity to don a Bonnyville Pontiacs jersey.

There are 15 returning players for the local Alberta Junior Hockey League (AJHL) team: one goalie, four defencemen, and 10 forwards. Head coach Rick Swan said everyone had to show that they wanted a spot on the team.

“Our philosophy is that everyone starts with a clean slate, which means that they’re not entitled to anything,” Swan detailed. “They have to come in and make sure that if they want to take the next step within our roster, they have to earn it.”

For returning player Joshua Kroon, that made him want to work that much harder to secure his spot.

“The competition here is unreal. Bonnyville is very selective for who they invite into the camp and so anyone has a realistic shot of making the team. That means there are great battles, great games, and lots of competition.”

Swan was blown away by the group when they hit the ice and described them as "exceptional."

“It’s our opportunity to see just how hard that they’ve worked over the course of the year and then to see athletes come in with their training and how hard they’ve invested over the summer months to try and make the right impression,” he said. “We always want to see our veterans take a step because they know what the expectations are with the organization and what the league's about, but it’s also great to be able to compare the ones that we’ve recruited hard that are top prospects for us that want to make sure that they come in and also leave a good impression.”

Some stand out players for Swan were newcomers and high-end prospects Will Hilfiker, Michael Fairfax, Trey Funk, and Alex Power.

“They were stand out prospects and they didn’t disappoint,” he noted.

Ensuring players fit into the Bonnyville Pontiacs culture is another important aspect for the coaches, who look at each player and what they bring off the ice.

“Our philosophy has always been to approach every athlete as an opportunity and to really emphasize that it’s not only an opportunity for us to develop a good hockey player but, more importantly, good citizens,” Swan expressed. “We decided that it’s never going to be either or for us, we’ll put as much emphasis on our culture, on building good citizens, as it is about what we do on the ice. People come to our organization because they want to be involved in that culture and they recognize in the veteran guys that we have are the people that they want to play with and be around.”

Instead of heading into their regular season once their roster is chosen at the end of main camp, the Pontiacs will be entering into a developmental season while the AJHL waits to hear back if the province has granted them exemptions to have fans watching their games.

“The developmental season gives us an opportunity to fulfill the need for our players to train and develop and at the same time allow us to, as a league, help us prepare our group for when those exemptions occur,” Swan said. “If we don’t get them in the phase two relaunch, it only allows us to build and develop our team, but to go through the process of making sure that we’re ready for the season when they do say it’s going to happen.”

In the meantime, the Pontiacs will be focusing on a high performance environment to improvie their players on and off-ice skills.