Bonnyville Pontiacs' season has come to an end

After an unforgettable season, the Bonnyville Jr. A Pontiacs have hung up their jerseys for the year.
May 3, 2021 1:45 PM By: Robynne Henry 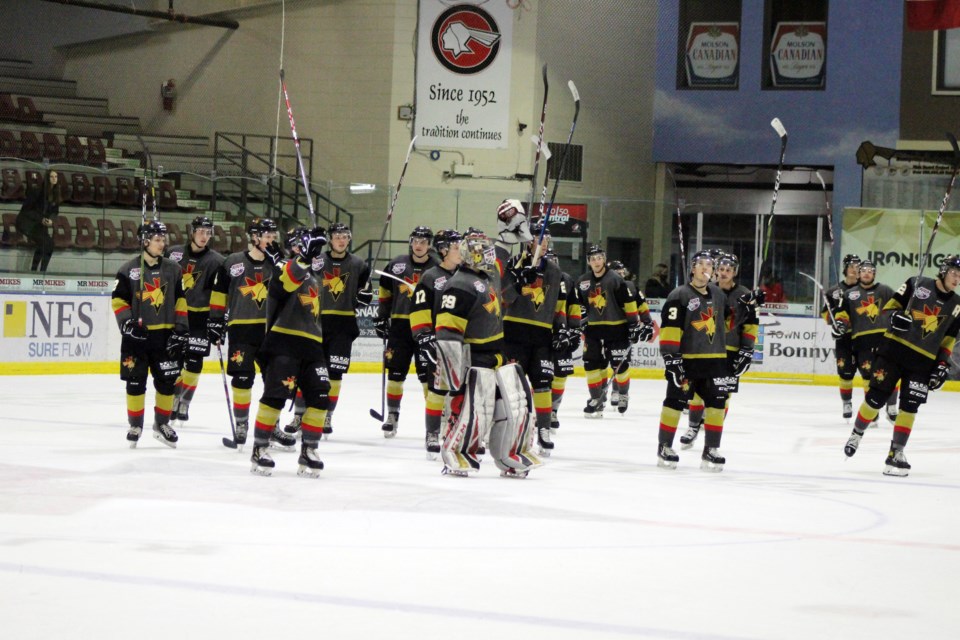 The Bonnyville Jr. A Pontiacs wrapped up their season early due to being a close contact with the Whitecourt Wolverines, who had a player test positive for COVID-19. File photo

BONNYVILLE – The buzzer has marked the end of the Bonnyville Jr. A Pontiacs' season.

Following the Alberta Junior Hockey League's announcement that as of May 9, game play would officially stop, the Pontiacs bid farewell to the 2020/21 season. The local team was scheduled for two weekends of head-to-head action, but those plans were put on hold after their last cohort team, the Whitecourt Wolverines, received a positive COVID-19 test result after their latest match-up.

“It certainly wasn’t the way we were looking for it to end,” noted Pontiacs Head Coach and General Manager Rick Swan. “We were looking forward to playing a four-game series against the Fort McMurray Oil Barons. We also recognize that there are more important things in the world than our league and our team. Now that we have a global pandemic that has affected everyone in so many ways, we felt grateful and we feel privileged to have the ability to play not only 12 games after the pause but the four games prior. We were able to stay within a cohort for a lot of the months where we know a lot of the hockey world wasn’t able to do what we were able to do.”

According to Swan, none of the Pontiacs tested positive for COVID-19 since the regular season picked back up in March.

Due to the pandemic, there were no playoffs planned for this year, and the Pontiacs won’t be holding a year-end awards ceremony. The number of wins and losses the team racked up over their brief season wasn’t important for their head coach.

“It wasn’t so much about competing for a championship either. It was about giving kids the privilege to do training and development, making sure that the game that they’ve worked so hard all their lives to be involved with, that we were able to provide them with a platform through the AJHL and the incredible work that not only our league did with the relationship that they had with our (province) to be able to take a leadership role and allow us to play and be involved as leaders in the Jr. A level in North America. That was pretty key to do that in a safe manner and we were able to do that.”

The Pontiacs had 18 points overall after completing 16 games. They had eight wins, six losses, and two falls in overtime.

The local team only played seven exhibition games and four regular season games in 2020 before the province tightened restrictions. And once they did get back onto the ice in March, after Alberta Health Services allowed them to continue to play, it was essentially a new team donning the Pontiacs' jersey. They lost eight players from the original group they started the season with.

“We almost had two teams this year,” Swan noted. “We had one team in August who went through a developmental season and then went through exhibition play to grow into our four-game regular season before the season was put on pause.”

It was a younger group that stepped up for Bonnyville in the second half of the year, who Swan said grew in "such a positive way."

“That’s part of our core values where, number one community, but positive growth is an important part of our core values and integrity. Doing things for the right reasons, and most importantly, treating people right. I think that we accomplished that. We stuck to our core values to allow both teams that we had... to be a real positive, indescribable experience for our athletes because of what we were able to do and how hard, not only our organization worked, but how our league worked to give us this opportunity.”

Some of the newer players never experienced the feeling of taking to the ice in front of their fans. Only those deemed necessary to run the game were permitted within the R.J. Lalonde Arena under the provincial protocols.

As one of the two leagues allowed back onto the ice, Swan stressed everyone involved knew what was at stake.

“We knew what was on the line if we didn’t abide by safe practices in a COVID-19 world, and that reflected the character of the group that we had and they didn’t want to lose that opportunity,” he detailed. “They had to self-isolate because they potentially could have brought the virus into our community. They embraced our community and showed appreciation for their effort.”

The Pontiacs’ coaches will now set their sights on the 2021/22 season and recruiting will go into full swing soon.

“The summer is going to be incredibly busy with people that are trying to host some identification and evaluation camps because, in Alberta, we won't be able to do so until probably August. It’s going to be some unique challenges and we’re going to have to get resourceful but I believe this year, had COVID-19 not been here, we would’ve had a pretty special team and I believe that next year the plan is to, not only have a competitive team our community can be proud of but a really special team with character and ability that I think people are going to be excited to be able to come and watch and support. I think that will be a special year overall, coming out of the COVID-19 world.”

The next time the Pontiacs hit the ice will mark the team's 30th anniversary. Plans are in the works to celebrate the occasion and make it a season to remember.