Bonnyville Pontiacs set to hit the ice in September 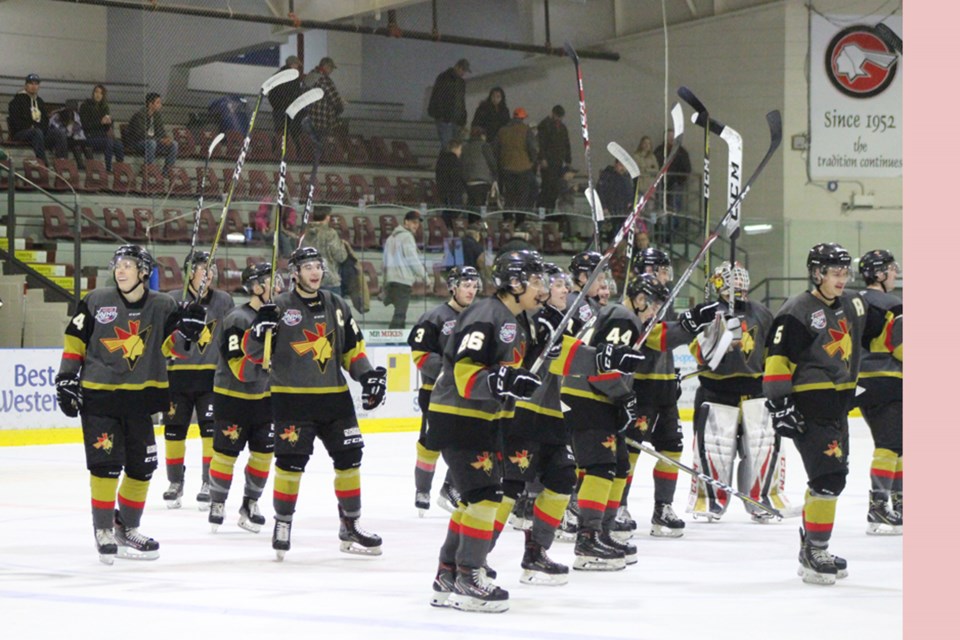 The Bonnyville Jr. A Pontiacs are gearing up for a modified season starting in September. File photo.

BONNYVILLE – The Bonnyville Jr. A Pontiacs upcoming season may look a little different, but the team is just eager to step back onto the ice in September.

The Alberta Junior Hockey League (AJHL) has released the schedule for the 2020/21 season, with a 58-game modified format.

“There’s going to be less travel involved between the north and south (divisions),” explained Pontiacs head coach and general manager Rick Swan. “We’ll only have one trip south, whereas normally we have two major trips and we also go in and out of Camrose.”

The schedule goes off the assumption that league play will begin in September, with the Pontiacs first game being Sept. 18 on the road. However, the AJHL has some contingency plans in place in case that doesn’t happen.

Neil Langridge, business operations manager for the Pontiacs, explained to town council during their July 14 meeting what would happen if they can't move ahead as planned.

“If the season does shut down or if we have to delay, the way the league has it set up is in two-week segments,” detailed Langridge. “If the league isn’t ready to operate yet or if something happens that it does have to be backed up, they take the first two weeks and they add it to the back of the year. They’re able to continue to do that all the way to December, that’s the way they have it set up and we would be playing into June that way.”

The safety of the team, spectators, staff, and volunteers will be a top concern during the season.

“We’re highly committed to making sure the fans, volunteers, and people that are going to be involved in, not only our organization but anywhere that we’re going to, take the right precautions to make sure that the safety and well-being of everybody is first and foremost,” Swan stressed.

With this in mind, the league has left the protocols and safety measures up to the facilities where each team plays.

According to Swan, the AJHL has requested the provincial government “look at us from a business standpoint versus a recreational hockey team you get in a sense of what a minor hockey structure would look like and how dependent we are on fans.”

With the season quickly approaching, Swan is looking forward to what it may hold for the Bonnyville Pontiacs.

“I’m so excited for this year, not only because we’ve got a large number of our players returning from last year but our recruiting has been exceptional,” he exclaimed. “COVID-19 has helped us in a way that we never thought, that a bad situation would turn out to be a positive result for us. What I mean by that is many players didn’t have playoffs, which is when a bulk of recruiting occurs for teams throughout North America. Our group had already done a good job of identifying kids early on and creating relationships with them that once everything was put to a halt, we already established the right relationships with the players that allowed them to look at our program and say ‘yes, this is where I feel comfortable with because of those people who created those relationships.'”

The Pontiacs August camp is scheduled for Aug. 28 to 31 at the R.J. Lalonde arena. If the season begins on time, Bonnyville will hit the road Sept. 18 against the Drayton Valley Thunder before their first home game on Sept. 26 against the Spruce Grove Saints.

During their meeting, the also agreed to increase their financial support for the Pontiacs to $15,000, which will allow the team to decrease the price of tickets by $3.

Voyageur teams won't play in 2020-21 season
Aug 4, 2020 11:19 PM
Comments
We welcome your feedback and encourage you to share your thoughts. We ask that you be respectful of others and their points of view, refrain from personal attacks and stay on topic. To learn about our commenting policies and how we moderate, please read our Community Guidelines.