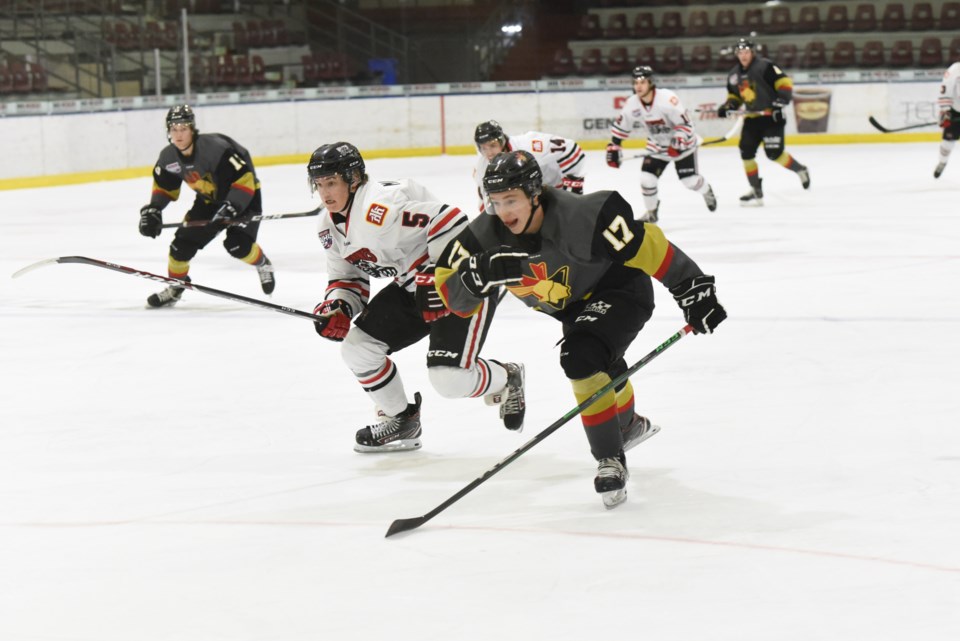 Austin Saint rushes the Whitecourt Wolverines' zone during their Saturday, April 24 game. The Pontiacs swept the Wolverines 4-0 in their four-game series. Photo by Game Ready Photography

BONNYVILLE – The Bonnyville Jr. A Pontiacs swept the Whitecourt Wolverines in their four-game series.

With the Pontiacs’ two home game wins over the weekend, they've bested the Wolverines in every matchup over the last two weeks.

This was a bounce back for Bonnyville after dropping their eight-game series 6-2 against the Sherwood Park Crusaders earlier in the month.

Pontiacs head coach and general manager Rick Swan said it's been a hard few weeks for the team for a couple of reasons, including Whitecourt still dealing with the fall out of some members testing positive for COVID-19 and having to isolate.

In addition to the pandemic setback, Pontiac Chayce Schmidt was dealing with a family tragedy after the death of his brother. Swan said the team plans to attend the funeral to support their teammate during this difficult time.

“The players competed hard, played the right way, and we were able to win four games straight against Whitecourt, who is a very good team.”

Pontiacs win in their barn

It was the Pontiacs’ night on April 25 when they bested the Wolverines 4-2 at the R.J. Lalonde Arena.

The first two points of the evening went to the Pontiacs when Alex Power got the home team on the scoreboard less than two minutes into the game and A.J. Macaulay followed up with a point of his own.

Whitecourt got their first point before the buzzer, which put the score at 3-1 headed into the final frame.

Pontiac Jaden York found the back of the net for his first point of the evening.

Even though the Wolverines added another check to their column, the Pontiacs skated off with the 4-2 win.

Finishing off the series strong

The Pontaics kept their momentum going with a 4-1 victory against the Wolverines..

Both teams nearly managed to keep each other off the scoreboard for the first period of their April 26 matchup. With less than a minute left in the frame, Power snuck the puck past the Wolverines’ goaltender, ending the first with a 1-0 lead.

Whitecourt tied it up 1-1 in the second with their only goal of the night.

Pontiac Kash Rasmussen gave the home team the 2-1 lead heading into the third.

Scoring a shorthanded goal, Ethan Sundar added his name to the scoresheet, with Austin Saint sinking an open netter to give them the 4-1 win.

Swan said there was a number of players who stood out to him during the series against the Wolverines, including goaltenders Easton Hesse and Matthew Hennessey and defensemen Zack Whittaker and Josh Kroon.

“We had some real good and strong specialty teams. We started to connect on the powerplays and our penalty kill was perfect over four games, which is a real compliment to the hard work that our guys did,” he expressed.

The Pontiacs next opponent will be the Fort McMurray Oil Barons.

“They’re a veteran team that’s older and we’re a very young group that’s come a long way since we started,” detailed Swan. “You’re really starting to see some of that buy-in and some of the potential that our group had all along. It’s going to be great to see. It’s going to be a great match up for our young players because they’re the top of the league and the cream of the crop being an older, more veteran team. We’ll see what kind of challenge it is for our young group.”

According to Swan, their four-game series against the Oil Barons will begin this upcoming weekend with back-to-back home games for Bonnyville on Friday, April 30 and Saturday, May 1. The Alberta Junior Hockey League (AJHL) hadn’t released the schedule before Lakeland This Week’s press deadline.